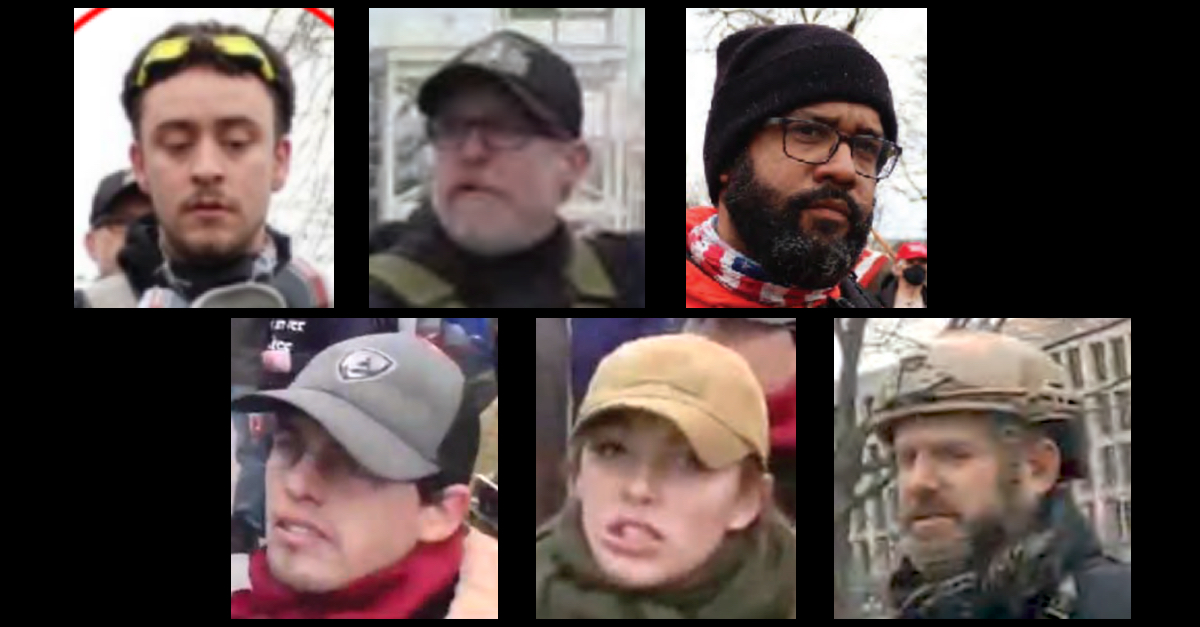 As Law&Crime previously noted, Felicia Konold is “a rare female self-proclaimed recruit of the anti-feminist” group.  Court papers cite a social media post where she says she was “recruited” by the Proud Boys of Kansas City, even though she was from Arizona, and that they told her she was “with them now.”

The defendants face the following indictments:

(1) Conspiracy, with a possible maximum penalty of five years in prison;

(2) Obstruction of an official proceeding, with a possible 20 sentence;

(4) Entering and remaining in a restricted building or grounds, 1 to 10 years (depending on whether a dangerous weapon was used).

Chrestman faces separate charges of threatening to assault a federal law enforcement officer “and for carrying a wooden axe handle while on the Capitol building and grounds,” the DOJ said.

“The indictment alleges that the defendants planned with each other, and with others known and unknown, to enter the Capitol forcibly on January 6, and to stop, delay, and hinder the Congressional proceeding occurring that day,” prosecutors said further. “The defendants brought and wore paramilitary gear and supplies — including camouflaged combat uniforms, tactical vests with plates, helmets, eye protection, and radio equipment, and affixed orange tape to their clothing and tactical gear to identify each other. The defendants marched with other members of the Proud Boys to the Capitol and forcibly stormed past exterior barricades, U.S. Capitol Police officers, and law enforcement officers, before all but Ashlock entered the Capitol.”

“Whose house is this?” he’s alleged to have shouted while facing the crowd assembled outside the capitol.

“Our house!” the crowd said.

“Do you want your house back?” Chrestman then questioned.

“Take it!” Chrestman shouted back, per DOJ documents.

Chrestman is accused of yelling “You shoot and I’ll take your fucking ass out!” at a Capitol Police officer “who was preparing to fire non-lethal projectiles to protect the Capitol,” the DOJ said.

Ashlock identified himself in photos from the Jan. 6th events when FBI agents came to speak with him at work, other court papers say.

All six are accused of attempting “to disable crash barriers,” which the DOJ described as devices “that descend from the ceiling to the floor” of the capitol as crowd control measures.

Charging documents say Chrestman, the Konolds, Kuehne, and Colon made it inside the capitol. Ashlock appears not to have gone inside.

Earlier documents questioned the use of orange tape by the six accused defendants by and many others:

“[M]any within the crowd both outside the Capitol with ASHLOCK, as well as both inside and outside the Capitol with Chrestman, Felicia Konold, Cory Konold, Kuehne, and Colon were wearing orange clothing or orange tape on their gear, hats, or helmets . . . . Kuehne was carrying two rolls of orange tape on his backpack. Your affiant [a federal officer] submits that the gauge of the Kuehne’s orange tape is consistent with the orange tape worn on the hats or helmets of, Chrestman, Felicia Konold, Kuehne, Cory Konold and Colon and the vest of ASHLOCK as well as others in the crowd. Based on my training and experience, your affiant believes the use of orange tape by multiple members in the crowd was a mark that was intended to identify persons for a particular purpose. The precise intent and purpose of this identifying tape remains under investigation.”

[images via the U.S. Department of Justice]