A Missouri Member of the Proud Boys Used a Chair to Stop a Capitol Gate from Lowering on Jan. 6. He Just Pleaded Guilty. 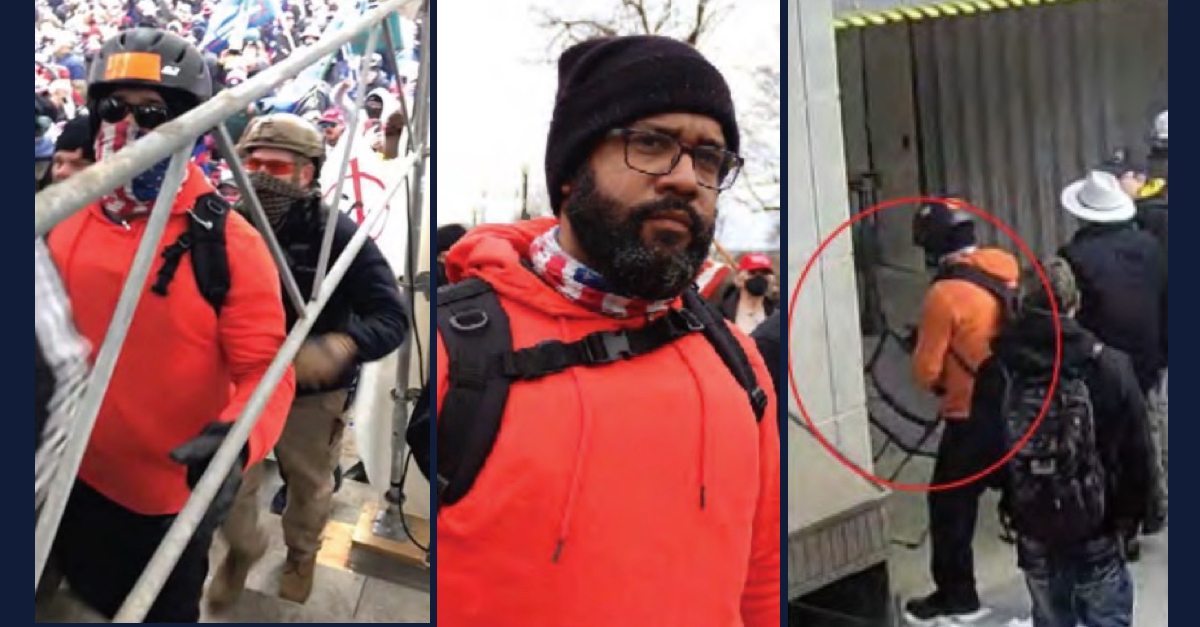 A member of the Proud Boys extremist group accused of using a chair to stop a protective gate from lowering at the Capitol on Jan. 6 has pleaded guilty to a felony and will cooperate with prosecutors.

Louis Enrique Colon, 45, pleaded guilty Wednesday to obstructing law enforcement officers during a civil disorder. He admitted that he used his hands and a chair to stop a retractable door at the Capitol from lowering to stop the increasingly riotous crowd of Donald Trump supporters from breaching the building.

The mob’s efforts succeeded insofar as Congress’ certification of Joe Biden’s electoral win was temporarily halted, with lawmakers either evacuating the building or sheltering in place.

Colon is one of six members of the Proud Boys charged with a mix of felonies and misdemeanors in connection with the Jan. 6 Capitol attack. According to his plea agreement, Colon will cooperate with prosecutors going forward.

At Wednesday’s hearing, Colon admitted that he coordinated with Proud Boys members to travel to Washington a few days ahead of Jan. 6 to support Trump, who had continued to falsely claim that he lost the 2020 election due to voter fraud. According to the statement of offense outlining the facts that form the basis of Colon’s guilty plea, he and other members of the group went to a hardware store on Jan. 5 to buy items to use on Jan. 6, including a “modified axe handle to be used as both a walking stick and an improvised weapon.”

The group also talked about taking violent action the next day—talk that apparently “shocked” Colon.

“In the evening on January 5, 2021, defendant attended a meeting with co-defendants William Chrestman, [Christopher] Kuehne, and [Ryan] Ashlock, and others during which group safety was discussed,” the statement of offense says. “At some point during the meeting, another individual said that he did not come to Washington, D.C., to just march around and asked, ‘do we have patriots here willing to take it by force?’ Defendant was shocked by this and understood that the individual was referring to using force against the government. Co-defendant Kuehne responded to the question by saying that he had his guns with him and, in essence, that he was ready to go. The individual who posed the question said that they should ‘go in there and take over.'”

On Jan. 6, Colon took steps to help his co-defendants do just that. After climbing a wall outside the building “to gain access to a higher level of the Capitol’s exterior,” he ultimately breached the building around 2:00 p.m. His interference with police soon followed.

“While inside the Capitol building, defendant observed co-defendants Chrestman, Felicia Konold, and Cory Konold at various points inside of the building, including in a downstairs area of the Capitol near where several retractable doors were being lowered by police officers in an attempt to stop rioters from proceeding further into a portion of the building,” the statement of offense says. “To prevent one of the doors from closing, defendant used his hands to stop the door and placed a chair in the door’s path, while co-defendant Kuehne and another individual placed a podium in the path of another door.”

Colon has agreed to pay $2,000 in restitution toward the estimated $1.4 million in damage done to the Capitol. That’s more than the $500 in restitution that has become standard for people pleading guilty in Jan. 6 cases.

The statute under which Colon pleaded guilty normally carries a potential 5-year maximum prison sentence and up to a $250,000 fine. Kelly, a Trump appointee, said that given Colon’s lack of criminal background and the nature of the offense, the sentencing guidelines calculated that he could potentially serve up to six months behind bars and pay a fine between $2,000 and $20,000, although Kelly is not bound by those estimates.

Colon also faced felony obstruction, conspiracy, and civil disorder charges as well as misdemeanor trespassing and disorderly conduct charges. Those remaining charges against Colon are expected to be dropped when he is sentenced, although Kelly did not set a sentencing date. Assistant U.S. Attorney Christopher Veatch asked for that date to be set “once we have a better understanding of how Mr. Colon’s cooperation may impact other defendants in this case.”