Former President Donald Trump spurred a “mob of domestic enemies” to conduct an “attempted coup” that was an attack on the U.S. Capitol, the Jan. 6 Committee’s chair declared at the long-anticipated start of the first public hearing.

The Committee’s Chair Bennie Thompson (D-Miss.) opened his remarks by invoking his background as a Democratic congressman from Mississippi, a part of the country where he noted many justified slavery, the Ku Klux Klan and lynching.

“I hear voices today try and justify the actions of the insurrectionists on Jan. 6, 2021,” Thompson said.

Referring to the committee’s co-chair Rep. Liz Cheney (R-Wyo.) as a patriot, Thompson denounced what he described as a false portrayal of the investigation as political rather than bipartisan. Cheney noted that Trump said he thought “maybe our supporters have the right idea” to call for his vice president’s hanging.

She also previewed the evidence the committee intends to present.

“You will hear testimony, live and on video, from more than half a dozen former White House staff in the Trump administration, all of whom were in the West Wing of the White House on Jan. 6,” Cheney said, previewing statements by Trump’s son-in-law Jared Kushner, Ivanka Trump, former Attorney General Bill Barr and others on Thursday night and future proceedings.

Barr was seen describing Trump’s election fraud claims as “bullshit,” a comment previously recorded but not seen on tape until Thursday. Ivanka Trump acknowledged that she accepted Barr’s assessment that her father lost the election. Kushner said that he had been working on pardons when White House counsel Pat Cippolone threatened to resign, a sentiment Kushner regarded as “whining.”

“Our Democracy Remains in Danger”

Both agreed with the need to revisit an attack on the U.S. Capitol that is now some 17 months in the rear view mirror.

“We can’t sweep what happened under the rug,” Thompson said. “The American people deserve answers. So I come before you this evening not as a Democrat, but as an American who swore an oath to defend the Constitution. The Constitution doesn’t protect just Democrats or just Republicans. It protects all of us: ‘We the People.’ And this scheme was an attempt to undermine the will of the people.”

Thompson noted, however, that “our democracy remains in danger.”

“The conspiracy to thwart the will of the people is not over,” Thompson said. “There are those in this country who thirst for power but have no love or respect for what makes America great: devotion to the Constitution, allegiance to the rule of law, our shared journey to build a more perfect Union.”

In the lead-up to the hearing, Rep. Jamie Raskin (D-Md.) told reporters that the committee’s findings would put Trump “at the center” of a plot to try to block the certification of President Joe Biden’s electoral victory. The committee’s aide echoed that framing in a call with reporters, describing a “coordinated, multi-step effort” by dangerous extremists to overturn the election.

Though Republican lawmarkers largely shunned the hearings, Rep. Cheney said that multiple members sought pardons to avoid prosecution for any connection to it.

“As you will see, Representative Perry contacted the White House in the weeks after January 6th to seek a Presidential Pardon,” Cheney said, referring to Rep. Scott Perry (R-Penn.). “Multiple other Republican congressmen also sought Presidential Pardons for their roles in attempting to overturn the 2020 election.”

As the presentation continued, committee leaders identified those extremists as the Oath Keepers and the Proud Boys, whose leaders Stewart Rhodes and Enrique Tarrio both face seditious conspiracy charges. British documentary filmmaker Nick Quested captured their meeting before the attack on the Capitol, and the committee began to suggest that the groups sought out a vulnerability at the Peace Circle to clear a path for the rioters.

One of the police officers injured in that confrontation then told her tale.

“It Was Carnage. It Was Chaos.”

U.S. Capitol Police Officer Caroline Edwards, the first law enforcement official injured during the attack that day, testified that she never had combat training, but that responding to the attack on the U.S. Capitol required “hours and hours of hand-to-hand combat.” 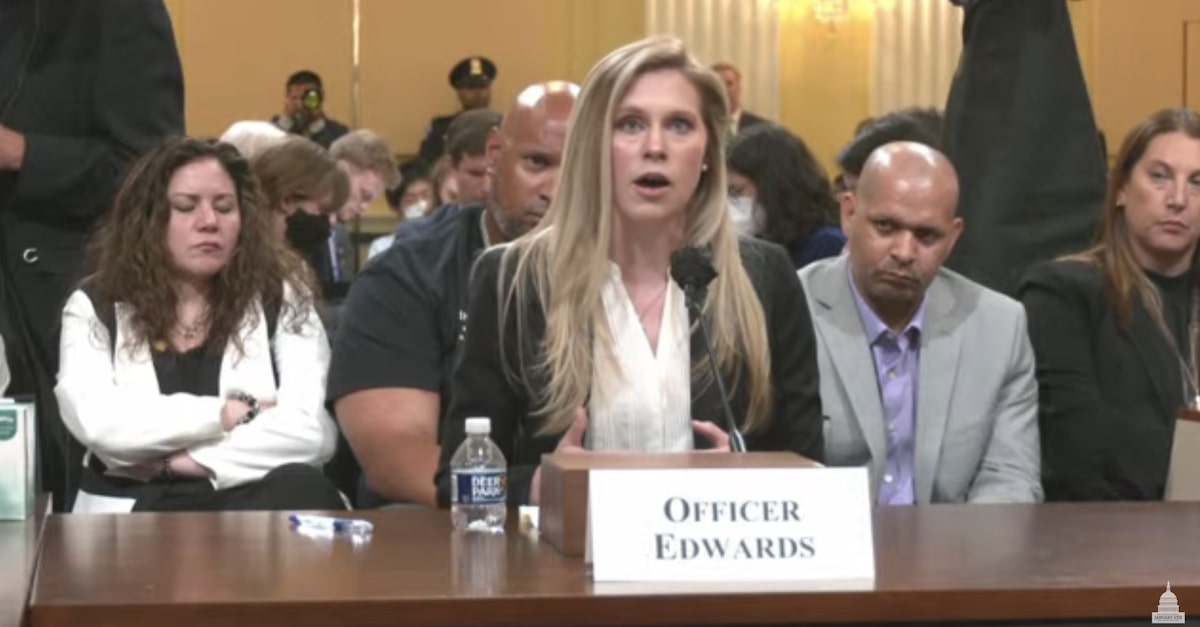 “It was carnage,” she said, recounting scenes of slipping in blood. “It was chaos.”

Edwards suffered a concussion and traumatic brain injury after rioters overturned a barrier that she guarded, knocking her over and prompting the ongoing prosecution of her accused assailant Ryan Samsel. The committee indicated that she had not returned to the force since that time. She also recounted the late Officer Brian Sicknick looking “ghostly pale” after being sprayed by rioters. Sicknick later died, but no line was ever drawn by investigators firmly tying his assault and his death.

“I was called ‘Nancy Pelosi’s dog,’ called ‘incompetent,’ called a ‘hero’ and a ‘villain,'” Edwards testified. “I was called a traitor to my country, my oath and my Constitution.”

She added later: “I had been called names before. But never had my patriotism or duty been called into question.”

Quested, the second anticipated witness, unspooled videotape supplementing an already enormous visual record of the Jan. 6th attack. As of late March of this year, Capitol Police reportedly turned over an estimated 14,000 hours of footage. A burgeoning docket of more than 840 cases made generous use of tape on across social media, YouTube, assorted surveillance and closed-circuit surveillance. The Department of Justice regularly releases videos introduced as federal courtroom exhibits to the press and public.

And yet, the full visual story had not been fully released.

Quested—the filmmaker behind the Afghanistan War documentary Restrepo and a number of rap videos—tracked the movements on the ground.

“There Was No There There.”

Cheney’s remarks were punctuated with video clips of deposition testimony from various members of Trump advisors. In one clip, Trump campaign lawyer Alex Cannon recalled a late-November conversation with then-Chief of Staff Mark Meadows, who had asked Cannon if he was “finding anything” in support of the effort to overturn the election results.

“I told Meadows that we weren’t finding anything that would be sufficient to change the results in any of the key states,” Cannon said.

“What was Meadows’ reaction?” a committee lawyer asked.

“So there’s no there there,” Cannon replied, recalling what Meadows said to him. 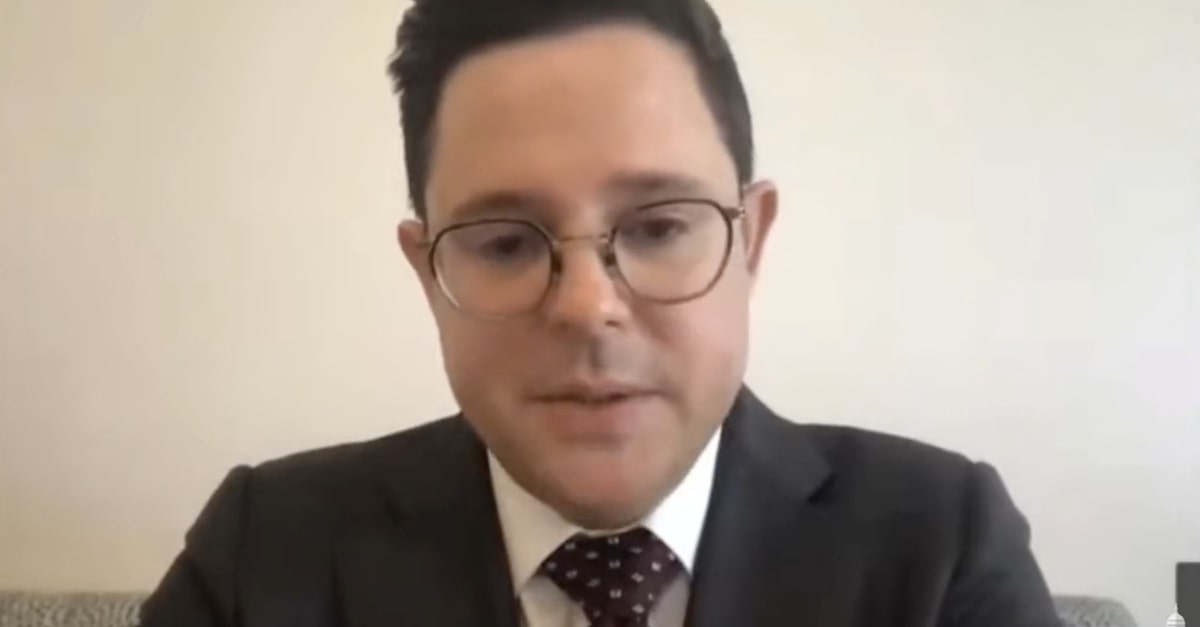 Cheney also shared video of testimony from Trump’s daughter Ivanka Trump, testifying about her reaction when she heard then-Attorney General Barr’s statement that there wasn’t any meaningful evidence of voter fraud.

“It affected my perspective,” Ivanka said. “I respect Attorney General Barr, so I accepted what he was saying.”

Cheney also outlined a late-night meeting between retired Lt. Gen. Michael Michael Flynn, former Trump attorney Sidney Powell, and others on Dec. 18, 2020. That meeting went on for “hours” before Trump advisors heard about it and “rushed to intervene,” Cheney said.

After its primetime debut, the Jan. 6 Committee will try to reach morning audiences next week on Monday and Wednesday. Both of those hearings have been scheduled for 10 a.m. Eastern Time. Ostensibly a bipartisan panel, the Jan. 6 Committee includes only two Republicans: Cheney and Rep. Adam Kinzinger of Illinois. But they have become the party’s virtual outcasts for their vocal criticism of Trump, whom polls show to be the GOP’s runaway favorite in polling for 2024.

House and Senate Republicans spurned efforts to create a non-partisan commission structured like the 9/11 Commission, and the party’s leadership has fought to delegitimize the committee’s work. Fox News, the conservative broadcaster, controversially stood alone among mainstream networks not to air the proceedings in full.

Cheney closed out her opening remarks by speaking directly to her Republican colleagues who continue to defend Trump and minimize the Jan. 6 attack.

“There will come a day when Donald Trump is gone,” Cheney said. “But your dishonor will remain.”