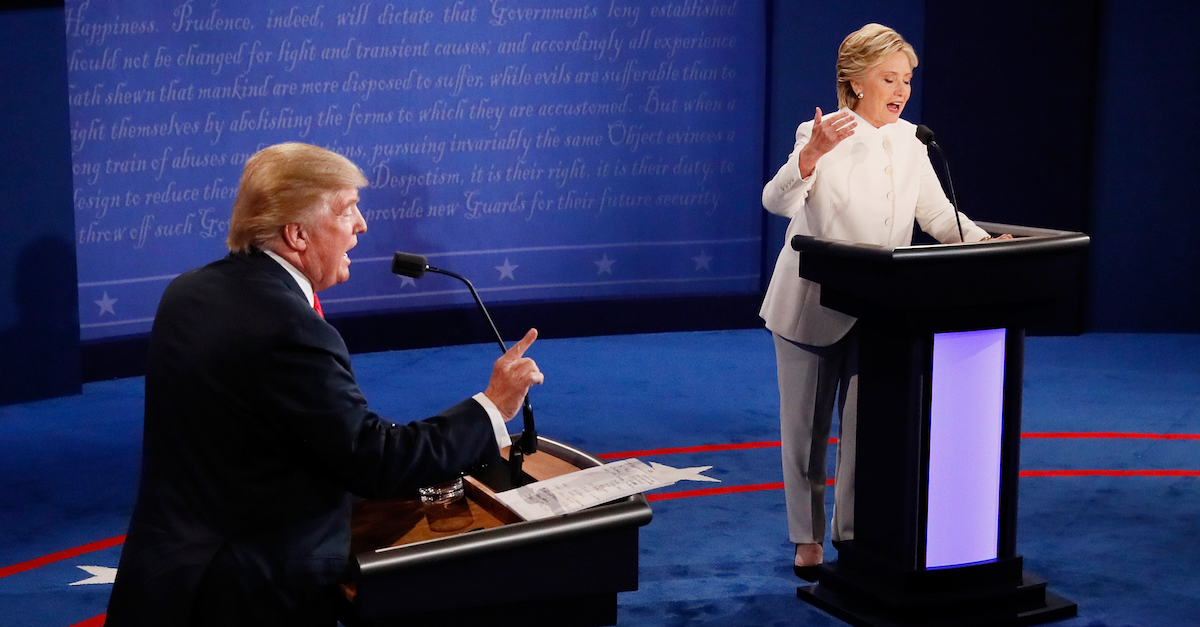 Attorneys for Donald Trump on Monday asked to stall paying sanctions directly to the first defendant who scored an award after being named in a thus-far-failed racketeering lawsuit against Hillary Clinton and others.

A request for sanctions by Clinton herself and several other high-profile defendants remains outstanding. However, U.S. District Judge Donald M. Middlebrooks awarded sanctions to defendant Charles Halliday Dolan Jr. after an earlier and separate request.

The sum total of sanctions earmarked for Dolan, according to Trump document filed Monday, is $66,274.23.  Trump’s attorneys are seeking to pay 110% of that amount, or $72,901.67, into a bond pending an appeal of their case on the merits.

The brief request for a stay lays out the math and the procedures suggested. They include a so-called “supersedeas bond” — Latin for “you shall desist” — to be paid to the district court in something akin to an escrow account. The bond will sit in the district court’s possession, according to Monday’s request by Trump’s attorneys, until the 11th Circuit Court of Appeals determines what it wants to do with the underlying case.

From Monday’s filing at length:

The Plaintiff’s attorneys, Alina Habba, Michael Madaio, Peter Ticktin, and Jamie Sasson, by and through their undersigned attorneys, hereby move this Court for a Stay of the Final Order Granting Motion for Sanctions which was rendered on November 10, 2022, and to Approve a Bond to be Paid to the Registry of the Court, and states as follows:

The Plaintiff requests this Court to Stay any collections including executions on the Final Judgment of this Court upon the filing of a Supersedeas Bond of 110% of the $66,274.23 which is the total amount of sanctions ordered, for a product of $72,901.67.

RULE 62.1 APPEAL BONDS OR OTHER SECURITY

A supersedeas bond or other security staying execution of a money judgment shall be in the amount of 110% of the judgment, to provide security for interest, costs, and any award of damages for delay. Upon its own motion or upon application of a party the Court may direct otherwise.

The filing continues by nodding to the still-in-situ appeal:

The duration of the stay should be until the Eleventh Circuit Court of Appeals issues a mandate or the equivalent. The stay shall only be effective in regard to collections the Final Judgment, and shall not apply to any subsequent orders for fees and/or costs.

WHEREFORE, the Plaintiff requests that this Honorable Court enter an Order Granting a Stay of the Final Judgment upon the depositing of $72,901.67 into the registry of this Court until the Eleventh Circuit Court of Appeals issues a mandate or the equivalent and such further and other relief as this Honorable Court may deem just and proper.

The appeal of the case before the 11th Circuit itself remains unclear.  A brief outlining Trump’s appeal-in-chief was due on Nov. 17, but the due date was pushed back to Dec. 21 at the request of Trump’s attorneys.

Trump alleged RICO violations and a long list of other claims against Clinton, the Democratic National Committee, and a collection of other political foes — real or perceived — in connection with the 2016 election cycle. Trump, of course, won that election, but he took his grievances about what transpired to federal court after he was voted out of office. The gravamen of the myriad claims generally involved a later-debunked narrative that Trump directly colluded with Russia while seeking election and Trump’s wishes to settle the score for that cooked-up narrative.

Middlebrooks determined that Trump’s attorneys (1) missed the statute of limitations to file such a case and (2) that the usual time bar on such complaints couldn’t be extended merely because Trump was being president for four years.  The latter is the most likely avenue for an appeal.

“[T]he claims presented in the Amended Complaint are not warranted under existing law,” the judge wrote back on Sept. 9.  “In fact, they are foreclosed by existing precedent, including decisions of the Supreme Court.”

Middlebrooks wrote of the “audacity of Plaintiff’s legal theories and the manner in which they clearly contravene binding case law” before dismissing the entire action:  “What the Amended Complaint lacks in substance and legal support it seeks to substitute with length, hyperbole, and the settling of scores and grievances.”