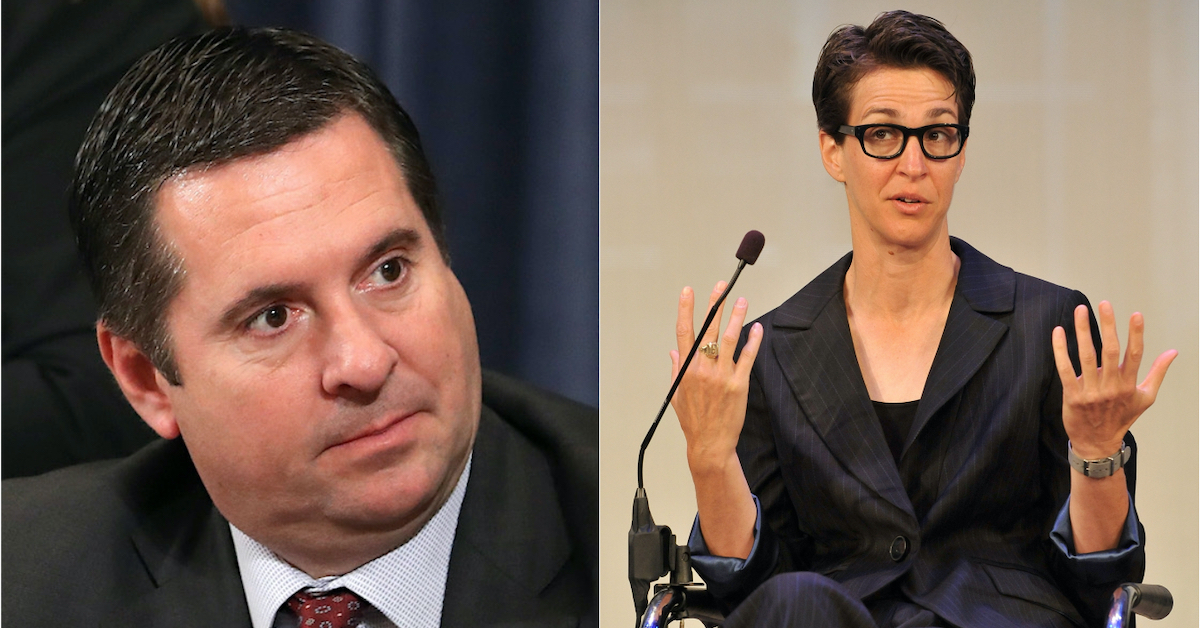 A federal judge in New York dismissed all but one of former California Rep. Devin Nunes’ (R) defamation claims related to on-air comments Rachel Maddow made suggesting that Nunes refused to turn over a package he received from a suspected Russian operative. The ruling means that one of Nunes’ claims will indeed move forward toward trial.

During the March 18, 2021 broadcast of The Rachel Maddow Show on MSNBC, the left-wing commentator hosted a segment about Russian interference with the 2020 presidential election. Specifically, Maddow discussed a report titled, “Foreign Threats to the 2020 US Federal Elections,” which had been declassified by the National Intelligence Council the prior week.

The report purported to describe Nunes’s handling of a package addressed to him from Andriy Derkach, a Ukrainian legislator with ties to Russian officials and intelligence services. Derkach has previously been tied to Rudy Giuliani’s attempts to discredit Robert Mueller.

According to the report, the package in question was delivered to the House Permanent Select Committee on Intelligence (of which Nunes was Ranking Member) in December 2019.

Maddow said on her show that Nunes accepted the package from Derkach, then refused to either hand over the package to the FBI or answer questions related to the package. By contrast, Nunes contends that the package was handled by his staff, then delivered — unopened — to FBI offices. Nunes also says he sent a letter to then-Attorney General William Barr alerting him to the matter and briefed the FBI about the package.

Nunes sued NBCUniversal, alleging that Maddow first defamed him when she said the following:

Andriy Derkach is sanctioned by the U.S. government as a Russian agent. He is singled out by name by the Director of National Intelligence as someone under Vladimir Putin’s direct purview who helped run this organization targeting our election last year. Congressman Nunes accepted a package from him. What was in it?

Congressman Nunes has refused to answer questions about what he received from Andriy Derkach. He has refused to show the contents of the package to other members of the intelligence community. He has refused to hand it over to the FBI which is what you should do if you get something from somebody who is sanctioned by the U.S. as a Russian agent.

Nunes also pointed to a third set of Maddow’s on-air comments: “Still, the Republicans have kept Mr. Nunes on as the top Republican on the intelligence committee. How does that stand? How does that stay a thing?” as another defamatory act.

NBCUniversal moved to dismiss Nunes’ complaint on a number of grounds, and U.S. District Judge Kevin Castel (a George W. Bush appointee) sided with the defense in all but one instance. As a result, Nunes’ lawsuit will now move toward trial, but only on one of Maddow’s statements.

To establish liability for defamation, a plaintiff must prove that a defendant made a false statement of fact about them and that the publication of the statement caused financial harm. A public official, such as Nunes, however, can only recover defamation damages if the statements in questions were made with “actual malice” — meaning that they were made with knowledge of their falsity with reckless disregard for their veracity.

NBCUniversal argued that Nunes’ complaint should be dismissed, because both because Maddow’s comments about Nunes were “substantially true,” and also because Maddow was expressing an opinion rather than a fact. As an alternate argument, NBCUniversal argued that its broadcast was covered by New York State’s “fair reporting privilege.” This privilege provides a total defense to any entity that reports on a judicial, legislative, or other official proceeding, so long as the reporting provides “fair and true” coverage of the proceeding.

Nunes confirms that the package was both addressed to him and received by his staff members… His staff member delivered the package to the FBI…And Nunes personally wrote to the Attorney General to advise him of the receipt of the package. The statement that Nunes “accepted” a package from Derkach compared with the actual truth as stated in Nunes’s complaint would not have a different effect on the mind of a viewer.

Castel also offered a second reason for dismissing that portion of Nunes’s complaint: “the Complaint does not plausibly allege a defamatory meaning” to Nunes’ receipt of a package. In other words, receiving a package is not the kind of statement with the kind of inherently negative meaning as to support a defamation claim.

Furthermore, Castel found that Maddow’s statement that Nunes “has refused to answer questions about what he received from Andriy Derkach,” was also substantially true. Castel explained that Nunes admitted to these underlying facts in his own complaint. Specifically, Nunes said that “during the House Intelligence Committee meeting of July 29, 2020, Nunes ‘stated that he did not wish to respond’ [to questions about the package], both because a response ‘risked disclosing classified information’ and because the questions were a ‘completely out-of-order, coordinated stunt.'”

Castel also ruled, however, that Maddow’s final sentence could be more problematic. When Maddow said, “He has refused to hand it [e.g., the Derkach package] over to the FBI which is what you should do if you get something from somebody who is sanctioned by the U.S. as a Russian agent,” those words could have been interpreted by a reasonable viewer to indicate facts far more serious than what might be true.

A refusal to turn over the package to the law-enforcement body tasked with investigating and enforcing the intelligence laws is factually distinct from declining to publicly answer questions raised in a public legislative proceeding, and could plausibly be understood by a reasonable viewer to suggest unlawful conduct on the part of Nunes.

Because Maddow’s statement may have suggested conduct more serious than the official report detailed, Castel ruled that her statements did not fall within New York’s fair report privilege.

Castel also rejected Nunes’ argument that Maddow’s question — “Still, the Republicans have kept Mr. Nunes on as the top Republican on the intelligence committee. How does that stand? How does that stay a thing?” — constituted defamatory accusations of wrongdoing. Rather, said Castel, the rhetorical questions were simply Maddow’s opinion.

Considering the immediate context of the questions, of political commentary on a political program, such statements and rhetorical questions would not be viewed by a reasonable person as expressing or implying facts about the plaintiff. The Court therefore concludes that Statement Three is privileged as pure opinion and not actionable.

On the issue of actual malice, Castel ruled that Nunes’ pleadings were sufficient to survive at the motion-to-dismiss phase. Multiple news outlets covered the facts related to Maddow’s statements, and it was too soon to ascertain whether Maddow conducted sufficient research to support her reporting. “A court does not weigh competing, plausible theories of actual malice on a motion to dismiss,” said Castel.