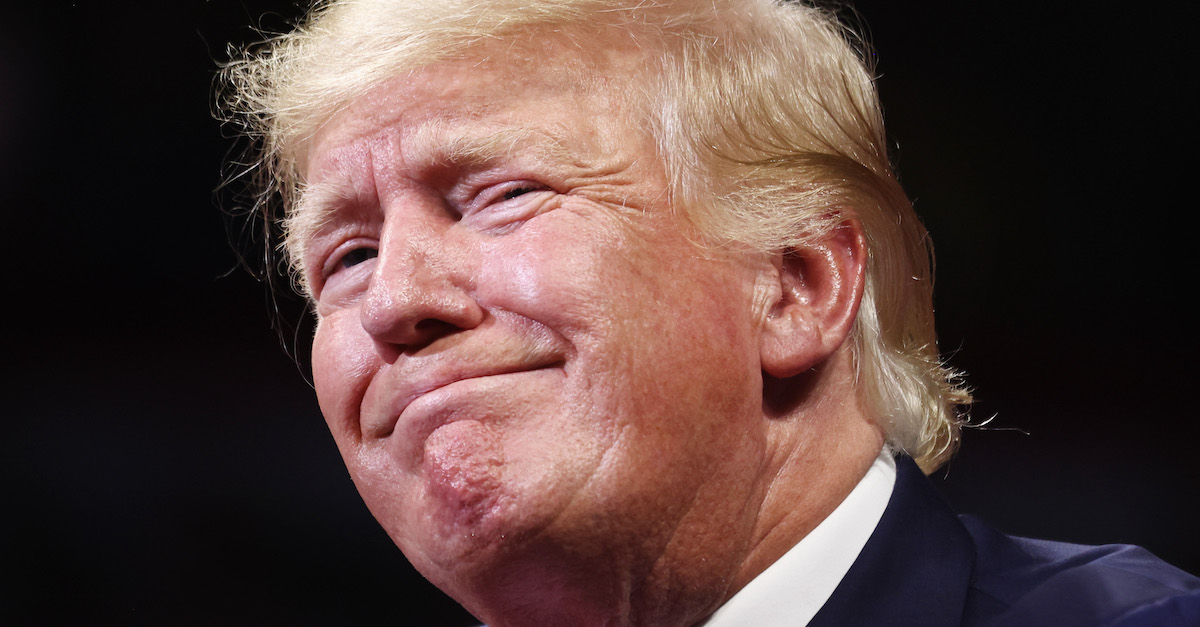 Donald Trump was photographed on July 22, 2022 at a rally in Prescott Valley, Arizona. (Photo by Mario Tama/Getty Images.)

A federal district court judge in Florida on Saturday signaled her “preliminary” intent to appoint a special master to review a tranche of material recovered from former President Donald Trump’s home and club in Palm Beach, Florida.

An Aug. 8, 2022 FBI search of Trump’s palatial Mar-a-Lago resort resulted in the recovery of boxes of secret and classified documents, according to an inventory filed before a U.S. magistrate judge who signed off on the original probable cause determination for the mission.

Trump’s attorneys did not directly fight the warrant in an original proceeding before U.S. Magistrate Judge Bruce E. Reinhart. Rather, they filed a concurrent proceeding, styled as Trump v. United States, in U.S. District Court for the Southern District of Florida on Mon., Aug. 22. That filing did not ask to quash the warrant entirely. Rather, among other things, it asked U.S. District Judge Aileen M. Cannon, a Trump appointee, to appoint a special master to review the voluminous evidence recovered from Trump’s post-presidential palazzo.

Special masters have been appointed to review allegedly privileged materials in other high-profile cases, including a search of Rudy Giuliani’s home and office, a raid involving Michael Cohen’s office, home and hotel room, and a search of the homes of staffers at Project Veritas.  Special masters generally filter out attorney-client communications so that such discussions do not fall into the hands of federal prosecutors.

On Saturday evening, Judge Cannon replied that she was inclined to grant the request for a special master due to the “exceptional circumstances presented” by the events at Mar-a-Lago.  However, that inclination, she said, was “subject to an opportunity” for additional arguments by both sides, including the U.S. Government.

As of Saturday, the government has not even entered an appearance in the matter before Judge Cannon; all of its practice has been focused on the original proceeding in Reinhart’s court.

(1)  Pursuant to Rule 53(b)(1) of the Federal Rules of Civil Procedure and the Court’s inherent authority, and without prejudice to the parties’ objections, the Court hereby provides notice of its preliminary intent to appoint a special master in this case.

Next came a series of specific demands for “the defendant” — the U.S. Government.  Judge Cannon ordered the government to “publicly file a Response” to Trump’s list of demands on or before Tues., Aug. 30.

Additionally, Judge Cannon ordered the government to file under seal a “more detailed” list of the property seized during the Aug. 8 search and a “particularized notice indicating the status of Defendant’s review of the seized property, including any filter review conducted by the privilege review team and any dissemination of materials beyond the privilege review team.”

A reply to the government from Trump’s legal team is due before Judge Cannon by Wed., Aug. 31.

The documents requested by Judge Cannon must, per her order and “accordance with Rule 53,” explain the parties’ “respective and particularized positions on the duties and responsibilities of a prospective special master, along with any other considerations pertinent to the appointment of a special master in this case.”

The government asserted in the original search warrant application before Magistrate Judge Reinhart that it believed violations of the Espionage Act and a few other laws may have been afoot.  It is framing the case around those criminal statutes, particularly  18 U.S.C. §§ 793(e), 2071, and 1519.  No one has been charged, however.

But in documents filed Friday, Trump’s attorneys alternatively characterized the dispute as arising under the Presidential Records Act, 44 U.S.C. §§ 2201-2209, which Trump’s camp indicated is “not a criminally-enforceable statute.”

In an earlier letter sent to the government before the warrant was executed, Trump’s counsel identified an entirely different statute— 18 U.S.C. § 1924(a) — as the purported locus of the matter.

Recently revealed letters that are connected to the document dispute suggest that the government is poised to contest one type of privilege Trump may attempt to assert over the fruits of the Mar-a-Lago seizure.  Letters from the National Archives indicate that Trump is trying to use theories of executive privilege to prophylactically guard certain material removed from the White House when he unceremoniously left office.

The government has asserted that a former president has no basis as a matter of law to assert executive privilege claims over a subsequent executive’s administration or to administrative agencies such as the National Archives.  Executive privilege is usually asserted by one branch of government over another.  For instance, the executive can — and has — asserted privilege over materials requested by members of Congress.  The policy rationale behind that area of law is that the privilege belongs to the branch of government and not to the individual who from time to time occupies the White House — as there must be at least some degree of interoperability from one administration to the next.