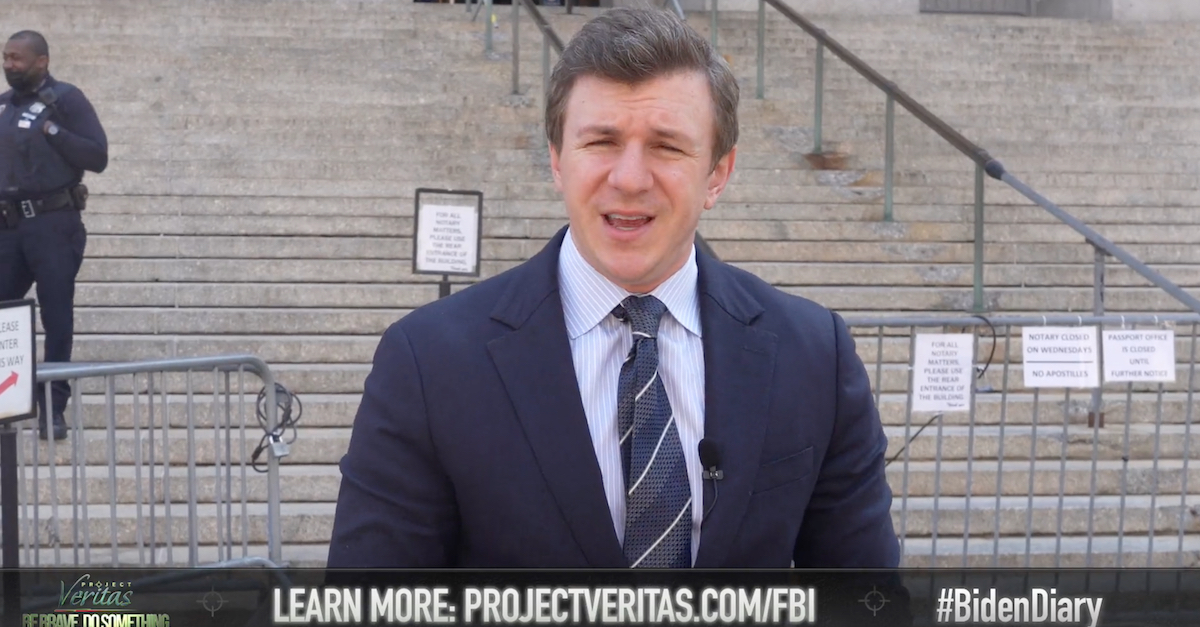 James O’Keefe appears in a Tuesday, March 22, 2022 video to complain about material he and his attorneys say the federal government seized from him in violation of the law.

In a 45-page Tuesday court filing, attorneys for Project Veritas accused the federal government of conducting an “all-out assault on the First Amendment and free press” by allegedly “circumventing” a review process established by a federal judge for legally protected materials seized from the group.  The upshot, urged the attorneys for the organization, is that federal prosecutors may have afforded themselves backdoor-style access to exactly the sort of information a judge ruled should be filtered out from a high-profile federal probe.

The filing involves a contested FBI raid on Project Veritas staffers — a raid which itself surrounded the organization’s receipt of the alleged diary of presidential daughter Ashley Biden.

“Because Project Veritas researched a potential news story about what Ashley Biden’s diary recounted about her father, the United States Attorney’s Office for the Southern District of New York has launched a retributive campaign that does violence to the First Amendment,” wrote the attorneys for the organization.

“As far as we know, federal law enforcement has never before investigated an abandoned diary,” the Project Veritas attorneys continued in a letter to U.S. District Judge Analisa Torres.  “Moreover, the government’s diary investigation has included extreme measures that violate the First Amendment and corrode freedom of the press.”

The missive from Project Veritas comes just a few days after the New York Times recapped what its sources claim to be the story how how the Trump-favored investigative organization came to possess the alleged Biden diary.  According to the Times, the U.S. Department of Justice is examining whether Project Veritas played a role — maybe even a “complicit” one — in “stealing Ms. Biden’s property and in transporting stolen goods across state lines.”

The Times report sheds new light on a government filing from late last year which argued that the conduct under investigation was not constitutionally protected: “That is, there is no First Amendment protection for the theft and interstate transport of stolen property, and as such no related privilege attaches to materials responsive to the search warrants.”

Pointing to the Supreme Court’s “clear and critical distinction” between “stealing documents and disclosing documents that someone else had stolen previously,” the government broke it down to a basic proposition.

“Put simply, even members of the news media ‘may not with impunity break and enter an office or dwelling to gather news,'” prosecutors wrote on Nov. 19, 2021, some weeks after the searches on the homes of Project Veritas staffers. Project Veritas and its staffers deny any allegation of impropriety and insist that they received the documents from sources in their journalistic capacity. 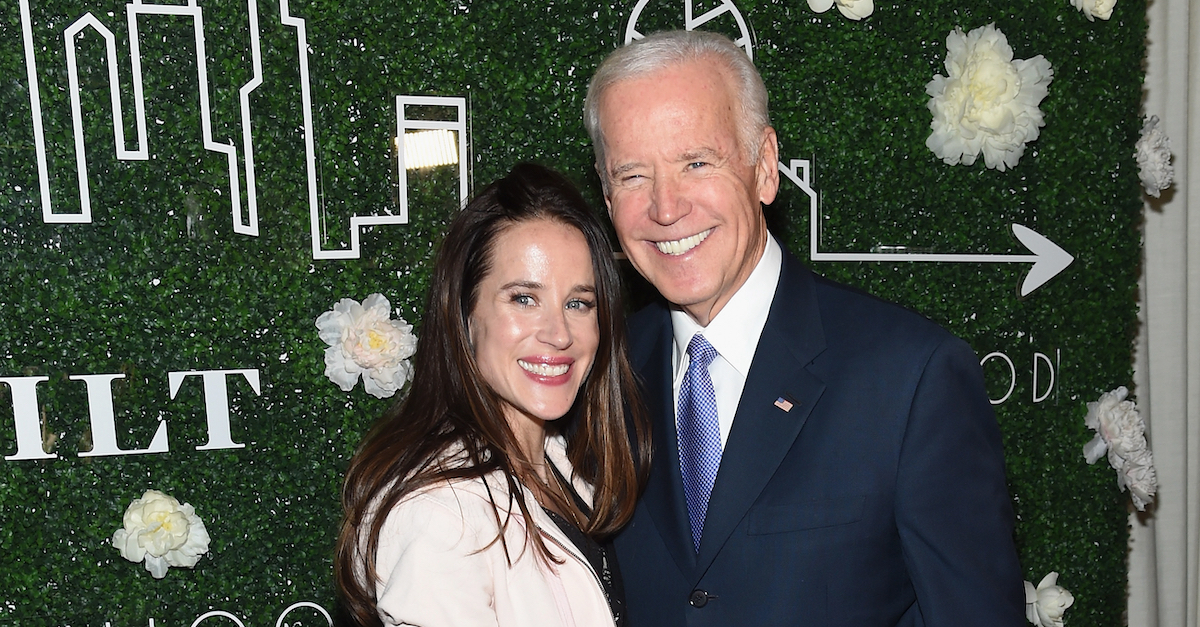 The FBI investigation, according to previous court documents, is believed by Project Veritas to have surrounded the connection of that organization to a diary which was purported by its sources to have emanated from the hand of the president’s daughter.  Previous letters to the judge said Project Veritas and O’Keefe individually had obtained “credible evidence that the diary belonged to Ashley Biden” but that neither could “confirm the diary’s authenticity to the degree they required to satisfy their journalistic ethics.”  Therefore, they “never published” the diary or any reports on its contents; instead, Project Veritas’s attorneys said the organization handed the material over what they called “local law enforcement in Florida.”

According to the subsequent federal court record, Judge Torres appointed a special master to unravel the matter on Dec. 8, 2021, under a case styled as In re: Search Warrant dated November 5, 2021 in the Southern District of New York. The special master’s appointment was intended to preserve the First Amendment and attorney-client privileges sought by Project Veritas.

“In light of the potential First Amendment concerns that may be implicated by the review of the materials seized from Petitioners, the Court finds that the appointment of a special master will ‘help[] to protect the public’s confidence in the administration of justice,'” the judge noted while agreeing that a special master was needed.

Project Veritas says the feds both circumnavigated and circumvented the procedure ordered by Judge Torres.  From the Tuesday letter, at length:

According to the letter, those government requests allowed prosecutors to look at the Veritas material aside and apart from the devices seized during the Nov. 6, 2021 raid and — therefore — allegedly without following the procedures established by Judge Torres herself.  The attorneys were especially angered to learn that federal eyes had sought to gaze upon Project Veritas material as far back as the November preceding the 2021 raid and that the feds didn’t disclose that they were after said material long before the contested proceeding surrounding the 2021 raid.

“It appears that the government misled this Court by omission, failing to disclose during the briefing and arguments over the appointment of a Special Master that the government had already obtained through these surreptitious actions many of the privileged communications this Court charged the Special Master with protecting,” the letter from Project Veritas attorneys continued. “The government’s clandestine invasions of journalist’s communications corrode the rule of law.”

“The government apparently disdains the free press, and candor to the Court and opposing counsel,” the letter went on to allege.

According to court papers attached to the letter, here is some of what the feds were after:

f. Evidence of steps taken in preparation for or in furtherance of the Subject Offenses, such as surveillance of Ashley Biden or property associated with her, and drafts of communications to Ashley Biden, President Biden, and Ashley Biden’s associates regarding her stolen property and communications among co-conspirators discussing what to do with her property.

When reached by Law&Crime, a representative with the U.S. Attorney’s Office for the Southern District of New York — the office that is handling the matter — declined to comment about the allegations levied by Project Veritas’s Tuesday filing.

The American Civil Liberties Union issued a carefully worded statement in response to the filing.

“We deplore Project Veritas’ deceptions, and we don’t have a full picture of the government’s investigation,” said Brian Hauss, senior staff attorney with the ACLU’s Speech, Privacy, and Technology Project. “But we’re concerned that the precedent set by this case could have serious consequences for press freedom. We’re deeply troubled by reports that the Department of Justice obtained secret electronic surveillance orders requiring sweeping disclosure of ‘all content’ of communications associated with Project Veritas email accounts, including attorney-client communications.”

Read the order appointing the special master and the Tuesday filing by Project Veritas below: