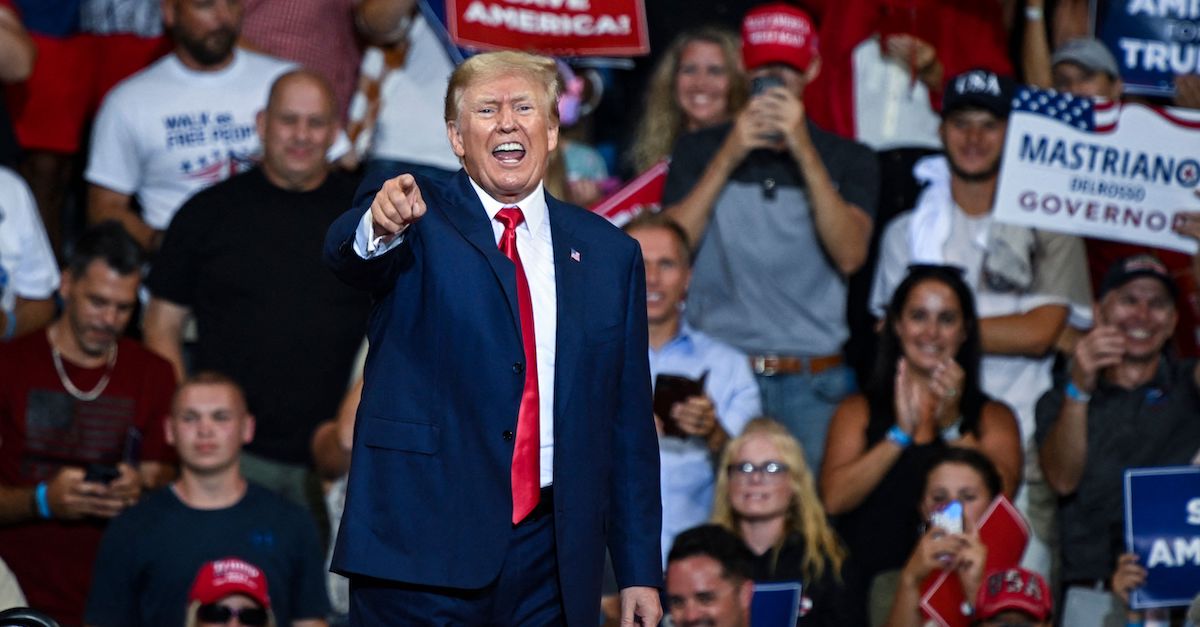 Former President Donald Trump speaks during a rally in Wilkes-Barre, Penn. on Sept. 3, 2022. (Photo by ED JONES/AFP via Getty Images)

Hours after insisting that the Mar-a-Lago investigation “must be conducted in the public view,” former President Donald Trump’s attorneys asked a federal judge to consider their objections to the Justice Department’s special master candidates in secret.

The request, contained in a supplemental pleading filed on Monday, claimed that it would be “more respectful” to the special master candidates to keep the public in the dark about the basis for Trump’s opposition.

“Plaintiff also submits it is more respectful to the candidates from either party to withhold the bases for opposition from a public, and likely to be widely circulated, pleading,” Trump’s lawyer Christopher Kise wrote in a three-page filing.

Jones was the special master selected to preside over the privilege review in the cases of Trump lawyers former and current: Michael Cohen and Rudy Giuliani.

Trump’s attorneys claims to have “specific reasons” why Jones and Griffith “are not preferred for service as Special Master in this case.” But they do not list those rationales publicly — nor do they want to do so.

“Therefore, Plaintiff asks this Court for permission to specifically express our objections to the Government’s nominees only at such time that the Court specifies a desire to obtain and consider that information,” their filing states. “Such information could then be provided in camera or pursuant to whatever procedure the Court deems most efficient and appropriate. Consistent with that approach, Plaintiff is willing to provide our specific rationale for supporting our nominees if and when the Court so orders.”

“There is a presumption in all matters that there’s a right to public access,” Epner said. “In this case in particular, there have been numerous times, but the press has already gone to get orders requiring public access that my experience of 25 years of practicing in criminal law, I have never seen a request like this.”

Epner, a partner at Rottenberg Lipman Rich, also called the request the “ultimate in hypocrisy.”

“The former president’s attorneys are speaking out of both sides of their mouths,” he said.

“Given the significance of this investigation, the Court recognizes, as does President Trump, that it must be conducted in the public view,” the filing from earlier in the day argued. “The Court has correctly directed commencement of a process which certainly benefits the Government, President Trump and the people of the United States.”

Former federal prosecutor Renato Mariotti also told Law&Crime he had not seen a filing like it.

“I haven’t seen something like this before in a court case, although I can understand why they don’t want to criticize the potential special master publicly,” Mariotti noted. “In the context of arbitrations, there is a secret process to rank them. In this context, usually nothing is said by the parties once the names are submitted.”

The Justice Department so far has remained silent on Trump’s choices for special master, one of whom is Paul Huck, a former partner at Jones Day, a major law firm that has long represented Trump, his campaigns, and now his political action committee.

Huck is married to U.S. Circuit Judge Barbara Lagoa, who — like Cannon — is a Trump appointee. She sits on the 11th Circuit, where the Justice Department has a pending appeal.

For Epner, the marital tie given the pending appeal makes Trump’s choice “unseemly.”

“It’s inappropriate, and it is corrupt,” he said.

Later in the day, the Justice Department entered a notice opposing only Huck’s appointment as special master, noting that he is the only nominee without relevant experience.

Read Trump’s request for secrecy, below: