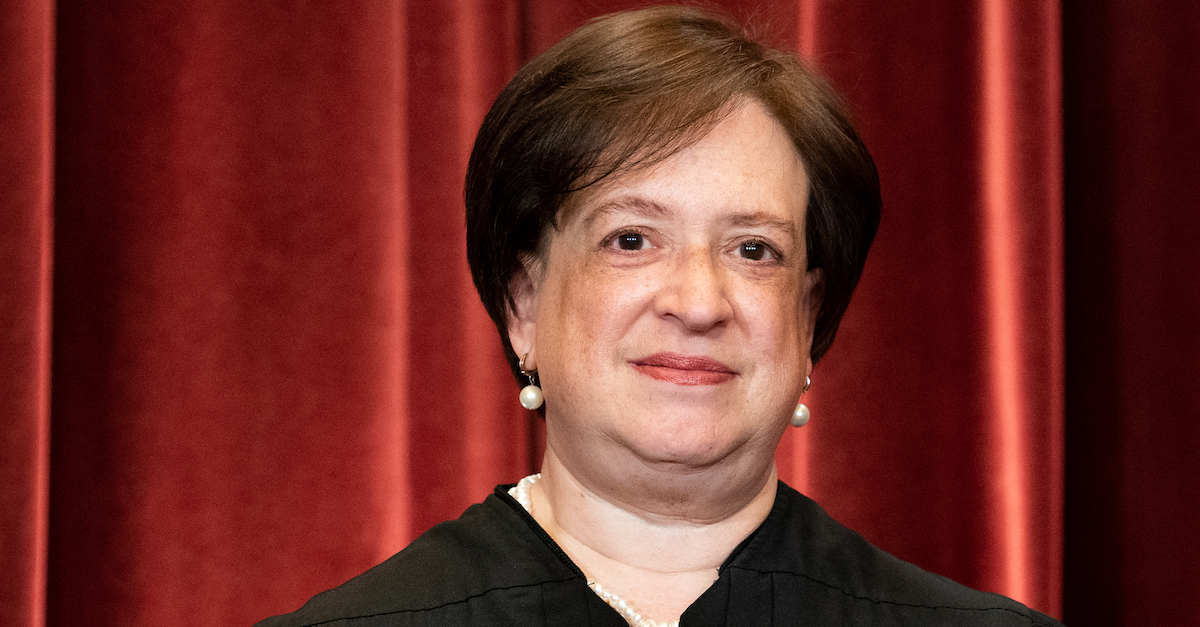 Associate Justice Elena Kagan stands during a group photo of the Justices at the Supreme Court in Washington, DC on April 23, 2021.

Kelli Ward, the chair of the Arizona Republican Party, asked the U.S. Supreme Court on Wednesday to stop the U.S. House Select Committee on the January 6 Attack from obtaining her phone records. In a quick turn of events, Justice Elena Kagan granted a brief reprieve.

In the emergency application, Ward asked Kagan, who oversees such applications in response to cases emanating from the U.S. Court of Appeals for the Ninth Circuit, to temporarily block a subpoena that requires her cellular service provider, T-Mobile, from handing over her phone records to congressional investigators.

In January, the committee issued the subpoena, demanding call records, phone numbers, text messages, and IP addresses Ward communicated with in the days and weeks following the 2020 election. Investigators are keen to get their hands on that information because Ward acted as a so-called “alternate” or fake elector as part of a would-be competing slate of Electoral College members who aimed to undo President Joe Biden’s victory in the Grand Canyon State and vote for then-President Donald Trump instead.

Ward, additionally, was a lead plaintiff in one of the self-styled “Kraken” lawsuits that were intended to similarly overturn Biden’s victories in various states. Filed by since-sanctioned Trump stalwart and attorney Sidney Powell, none of those lawsuits went anywhere.

After attempting to quash the subpoena, the committee – several months later – responded on the merits and called for the district court to dismiss Ward’s objection, which was granted. Ward then appealed to the Ninth Circuit but the appellate court affirmed the lower court’s order, paving the way for T-Mobile to provide the records.

The 94-page emergency stay request relies on an argument that there is a “reasonable probability” four of Kagan’s colleagues are likely to grant her merits case worthy of hearing during oral argument – four high court members are required to grant a petition for writ of certiorari. The motion also argues that there is a “fair prospect” that a majority of justices would vote to reverse the lower courts.

“This is an unprecedented case with profound precedential implications for future congressional investigations and political associational rights under the First Amendment,” the filing argue. “In a first-of-its-kind situation, a select committee of the United States Congress, dominated by one political party, has subpoenaed the personal telephone and text message records of a state chair of the rival political party relating to one of the most contentious political events in American history.”

Ward’s husband, Michael Ward, is also included as a petitioner – the couple were 14 out of 84 total alternate electors who have been subpoenaed by the committee so far this year. Kelli Ward’s information has also been sought in a recent subpoena directed toward Trump himself. Michael Ward and the couple’s medical practice are plaintiffs in the lower court cases but the committee itself is only specifically seeking Kelli Ward’s information.

“The telephone and text message records of the state chair of a major political party should enjoy at least as much First Amendment protection as the identities of a journalist’s confidential sources,” the petition argues – citing heavily from the sole dissent in the Ninth Circuit ruling by George W. Bush-appointed Judge Sandra Ikuta.

The First Amendment goes on to play a prominent role in the filing.

“The effect of this subpoena would be to gather the telephone numbers (and via reverse look-up directories the identities) of every person who was in contact with Dr. Ward during one of the most contentious periods in our political history,” the petition argues at one point.

Ward also dings the January 6th Committee for a a seven-month delay before they finally addressed her case on the merits.

“Here, the Committee requested, and was granted, extensions for seven months prior to filing its Motion to Dismiss,” the petition continues. “Even then, the Committee would not have filed its Motion to Dismiss when it did had the district court not forced it to respond. To the extent there is any urgency now, it is urgency entirely of the Committee’s making and does not justify depriving the Wards of the right to meaningful appellate review in one of the most important First Amendment cases in history.”

Kagan, in a terse order via the so-called “shadow docket,” granted the request – and seemingly cognizant of those delays, ordered a tight briefing schedule.

The committee’s response to the application is due this coming Friday, Oct. 28, 2022.