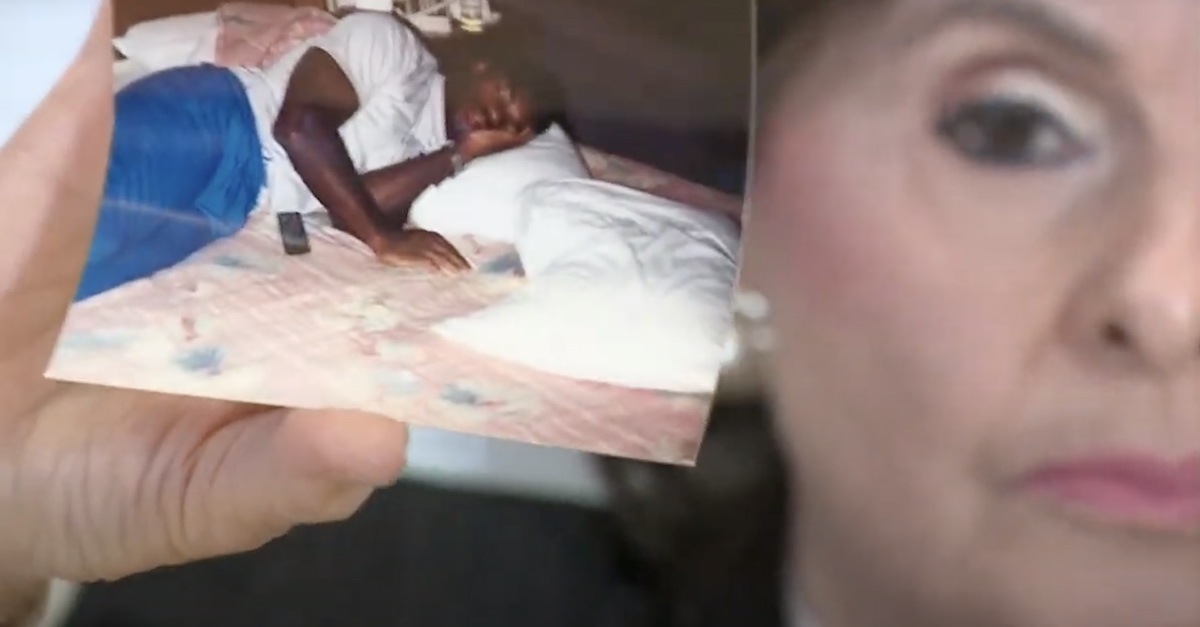 Attorney Gloria Allred holds a photo she said is of Herschel Walker in 1990, during a press conference on Wednesday, Oct. 26, in Los Angeles.

An anonymous woman told reporters Wednesday that Herschel Walker, the Republican U.S. Senate candidate in Georgia, pressured her to have an abortion that he funded in 1993, calling him a hypocrite who falsely claimed on Fox News that he never signs his name as “H.”

Attorney Gloria Allred held a press conference in Los Angeles to announce the woman’s claims, displaying letters she said Walker wrote the woman in the 1990s, a receipt from a hotel stay 32 years ago and a photo she said was of Walker sleeping in bed.

Walker denied the allegations at a campaign rally Wednesday, with a reporter telling Allred he’d compared them to the sexual misconduct claims against then-nominee Brett Kavanaugh during his confirmation hearings to the Supreme Court. He said it was a celebrity lawyer coming out and making false allegations.

Walker also said, “And I also want to let you know that I didn’t kill JFK either. And right now they, Sen. [Raphael] Warnock, got crushed at that debate and now the Democrats are doing so, whatever they can to win this, to win this seat,” according to NBC News.

When a reporter told Allred he’d called the allegations “foolishness,” she replied, “I think Mr. Walker should respond to each and every allegation our client made rather than giving an absurd and nonsensical response.”

A licensed attorney in California since 1975, Allred does not currently have a legal action against Walker, and she declined to say if one may be on the horizon.

“She sought legal representation, which is very wise on her part, and she sought support in speaking her truth. We’re not discussing what the next step will be,” Allred said of her alleged client.

Allred also made clear she’s hoping to influence Georgia voters, who have started voting in a tight race that pits Walker against Warnock, the Democratic incumbent.

“This is not just about the values of Herschel Walker,” Allred said. “This is about the values of every voter in Georgia who decides to vote for him. Because if they’re voting for him then they’re expressing their values that it’s OK to lie and it’s OK not to have your deeds match your words.” She added: “I think the voters in Georgia are very bright, I give them a lot of credit.”

Another woman who has a child with Walker also has said he paid for her abortion in 2009 after encouraging her to have one. Walker was confronted during a recent NBC News interview with a receipt from an abortion clinic and a $700 check dated days after the receipt. He acknowledged the check was his but denied that it had paid for an abortion.

But Allred on Wednesday declined to say whether she had records of the alleged abortion or say how much Walker paid for the procedure, nor would she say whether photos exist of the woman and Walker together.

“We also have definitely more exhibits, but we will not be providing them at this time. But if it’s appropriate to do so in the future we’ll make the decision at that time,” Allred said. She said the receipt and photos could be inspected by reporters who attended the press conference in person, but she wouldn’t allow anyone to look at the letter she said Walker wrote the woman’s parents, keeping it inside an envelope. Asked if the letters had been examined by a handwriting analysis, Allred told reporters they’re welcome to have them analyzed themselves.

“If any of you want to do a handwriting analysis, feel free to do it. We don’t think it’s necessary, but we have a number of items here and you can go feel free to have it analyzed,” Allred said.

Prior to answering a few questions, Allred read a prepared statement, then the woman, who did not appear on camera, read another, similar statement that had been written in first person.

“Mr. Walker professes to be against abortion even though he paid for and pressured our client to have an abortion,” Allred said.

The woman said she is not coming forward because Walker is a Republican Senate candidate.

“I am a registered Independent and I voted for Donald Trump in both elections. I do not believe that Herschel is morally fit to be a U.S. senator and that is the reason why I am speaking up and providing proof,” the woman said.

Allred declined to identify which state the woman was speaking from, saying, “I’m not going to identify the state except to say it’s not where she lives.” Allred also said the woman will not be giving interviews.

Allred said the woman and Walker were in a relationship starting in 1987, when she lived in Dallas, Texas, and Walker played football for the Dallas Cowboys. She said she visited him in Minnesota after he was traded to the Vikings in 1989, and he sent her a card signed “Sam, Stud or H.” Another card was signed “Love ya forever, H,” the lawye said.

“The reason the signed cards with the letter ‘H’ is important is because in a televised interview on Fox News Channel, which is available on the internet, Mr. Walker stated, ‘I have never signed anything with just an ‘H,'” Allred said, mimicking Walker.

Allred also played a recording she said was a voicemail Walker had left on the woman’s answering machine while he was competing in bobsledding at the Winter Olympics in France in February 1992, and she said she has a letter Walker wrote her parents his card “in which he repeatedly states that he loves our client and apologizes for the ‘mess’ that he has created, apparently referring to having a relationship with their daughter while he remained married.”

The woman learned she was pregnant in April 1993, and “Mr. Walker clearly wanted her to have an abortion and convinced her to do so,” according to Allred. He gave her cash to visit a clinic, but she “became overwhelmed with emotion” while there, the lawyer continued.

“She could not go through with it and left the clinic in tears,” Allred said. “The following day, Mr. Walker drove her to the clinic and waited in the parking lot for hours until the abortion was completed, and she came out. Then he drove her to the pharmacy to pick up medications and supplies as prescribed and then drove her home.”

Whoever was monitoring Allred’s Zoom press conference disabled the chat after a reporter asked if, given the meticulous record-keeping demonstrated through the hotel receipt and other documents, did the woman also save records directly related to the abortion?

Allred ended the press conference by telling everyone to “Have a great day,” then looking into the camera and saying, “You, too, Herschel.”

[Image: screenshot from WAGA-TV, a Fox affiliate in Atlanta]