Jan. 6 Committee Subpoenas Donald Trump, Blasting Him for His ‘Central Role’ in Bid to Block Transfer of Power That Led to ‘Bloody Attack’ 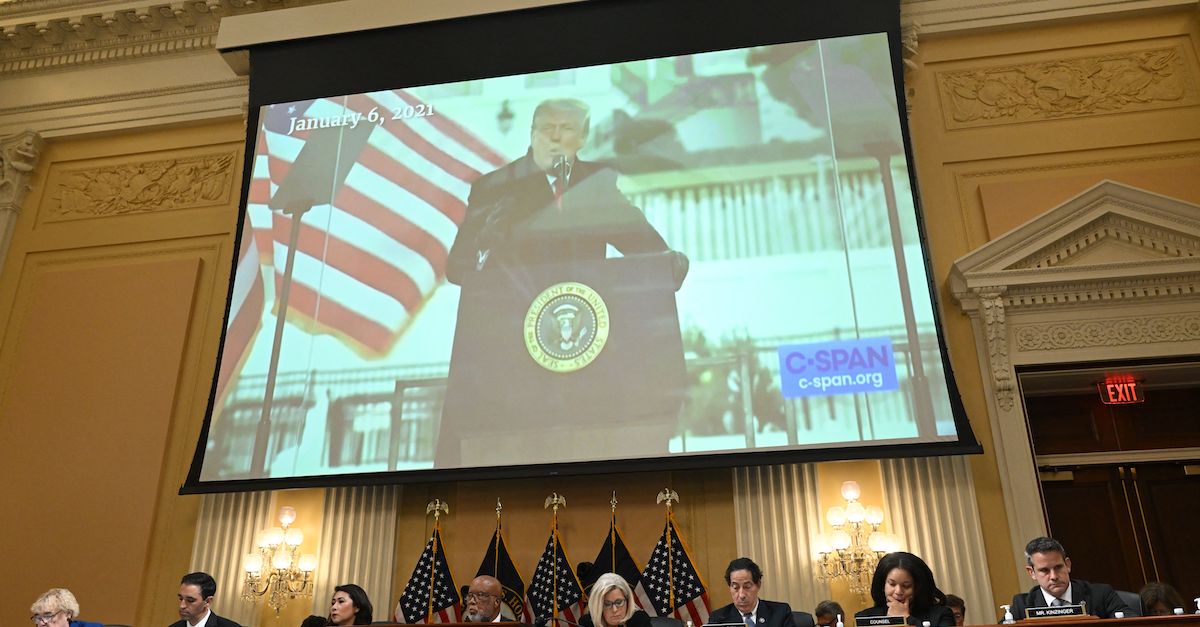 An image of former US President Donald Trump is shown during a full committee hearing on the Jan 6th investigation on Capitol Hill on July 12, 2022, in Washington, D.C.

The Jan. 6th Committee excoriated former President Donald Trump in a lengthy subpoena and letter placing him “at the center” of a plot against the peaceful transition of power, one that he knew to have been “illegal and unconstitutional.”

“In short, you were at the center of the first and only effort by any U.S. President to overturn an election and obstruct the peaceful transition of power, ultimately culminating in a bloody attack on our own Capitol and on the Congress itself,” a letter accompanying subpoena states. “The evidence demonstrates that you knew this activity was illegal and unconstitutional, and also knew that your assertions of fraud were false. But, to be clear, even if you now claim that you actually believed your own false election claims, that is not a defense; your subjective belief could not render this conduct justified, excusable, or legal.”

Earlier this week, a federal judge added specificity to his prior findings that Trump “more likely than not” committed two felonies: obstruction of an official proceedings and conspiracy to defraud. Adding fuel to the fire of the latter allegation, U.S. District Judge David Carter said that Trump attached his signature to voter fraud statistics that his lawyers informed him were false.

That the subpoena was issued was no surprise: The Committee voted in favor of it at its most recent proceedings.

“Because of your central role in each element of these actions, the Select Committee unanimously directed the issuance of a subpoena seeking your testimony and relevant documents in your possession on these and related topics,” the letter states. “This subpoena calls for testimony regarding your dealings with multiple individuals who have now themselves invoked their Fifth Amendment privilege against self -incrimination regarding their communications with you, including Roger Stone, Lt. Gen. Michael Flynn, U.S. Army (Retired), John Eastman, Jeffrey Clark, and Kelli Ward. These Fifth Amendment assertions – made by persons with whom you interacted — related directly to you and your conduct.”

The subpoena seeks 19 sets of documents, starting with “any telephone calls, text messages, or communications sent through Signal or any other means, placed or received by you or at your direction on January 6, 2021, including records of any calls you joined as an active or passive participant.”

Trump famously claims not to use texts messages or emails. Signal is an app, popular with journalists and others who need to communicate securely, that provides for encrypted chatting.

Despite recognizing that their action is historic, the Committee notes that it is not unprecedented.

“We recognize that a subpoena to a former President is a significant and historic action,” the letter states. “We do not take this action lightly. But as you likely know, you would not be the first former president to testify before Congress or to receive a congressional subpoena. Former Presidents John Quincy Adams, John Tyler, Theodore Roosevelt, William Howard Taft, Herbert Hoover, Harry Truman, and Gerald Ford each testified before Congress after they left office.”

The Committee pointedly quoted Roosevelt as having explained during his congressional testimony that “an ex-President is merely a citizen of the United States, like any other citizen, and it is his plain duty to try to help this committee or respond to its invitation.”

“Even sitting Presidents, including Abraham Lincoln and Gerald Ford, also testified before Congress,” the letter continues.”Further, both former and sitting presidents including Presidents Nixon, Tyler, and Quincy Adams, have provided evidence in response to congressional subpoenas.”

Trump’s attorney did not immediately respond to an email requesting comment. Legal experts doubt that he will ever testify, with the subpoena falling shortly before the midterm elections.

Read the letter and subpoena here.