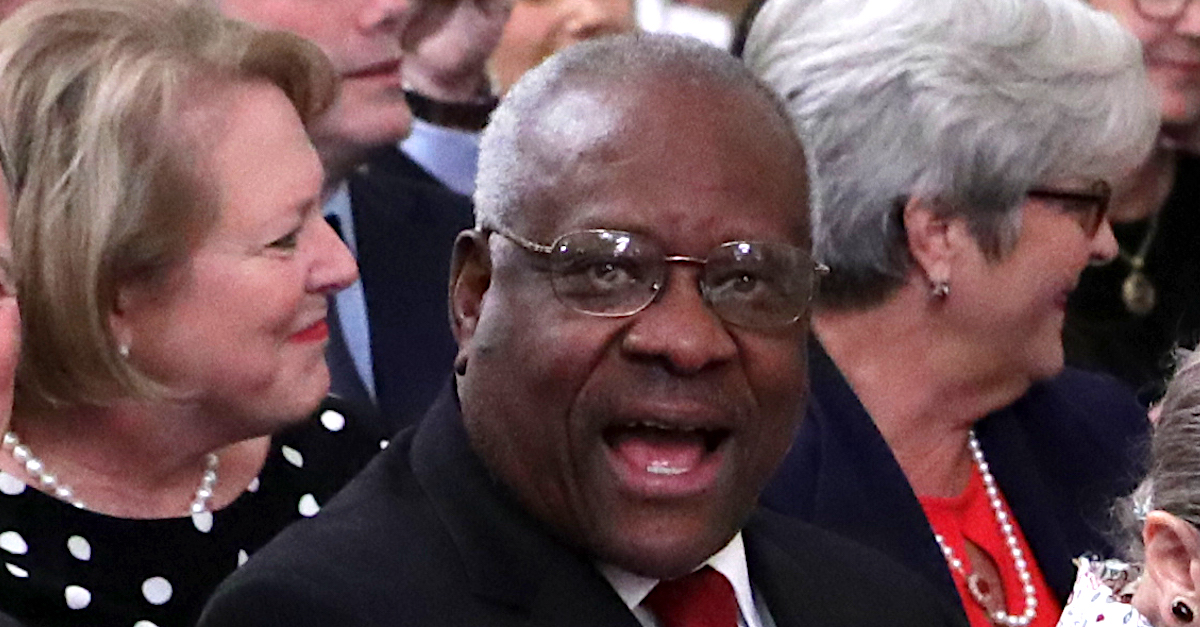 The Supreme Court of the United States on Monday put an end to a lawsuit that challenged then-President Donald Trump’s then-ability to block his critics on his personal Twitter account. The justices unanimously vacated a lower court’s decision, which held that Trump’s actions violated the First Amendment. The high court ordered the case dismissed as moot in light of the fact that the former president has been permanently banned from Twitter. But more significantly, Justice Clarence Thomas became the first member of the high court to endorse a radical new view of social media companies that been steadily gaining steam among conservatives.

Writing a separate concurrence that was not joined by any of the other eight justices, Thomas suggested that social media companies like Twitter and Facebook had become too powerful and should be stripped of their First Amendment rights to moderate speech on their websites.

“Today’s digital platforms provide avenues for historically unprecedented amounts of speech, including speech by government actors. Also unprecedented, however, is control of so much speech in the hands of a few private parties,” Thomas wrote. “We will soon have no choice but to address how our legal doctrines apply to highly concentrated, privately owned information infrastructure such as digital platforms.”

The U.S. Court of Appeals for the Second Circuit in 2019 held that because the president used his Twitter account as a channel for official government communications, blocking access to that pseudo-public forum of information violated users’ First Amendment rights. After spending months flagging Trump’s false tweets about the 2020 election, Twitter did just that, permanently banning Trump from the platform two days after his supporters stormed the U.S. Capitol to prevent Congress from ratifying the votes of the electoral college.

Thomas, however, said there was particular tension between the view that Trump’s account was a public forum and the fact that Twitter could simply eliminate Trump’s account whenever it wanted.

“Because unbridled control of the account resided in the hands of a private party, First Amendment doctrine may not have applied to respondents’ complaint of stifled speech,” Thomas wrote. “Where, as here, private parties control the avenues for speech, our law has typically addressed concerns about stifled speech through other legal doctrines, which may have a secondary effect on the application of the First Amendment.”

According to Thomas, one of the ways to address this problem is to implement a “common carrier” regulatory framework upon social media companies, meaning its service must be provided to anyone.

“In many ways, digital platforms that hold themselves out to the public resemble traditional common carriers,” he wrote. “Though digital instead of physical, they are at bottom communications networks, and they ‘carry’ information from one user to another. A traditional telephone company laid physical wires to create a network connecting people. Digital platforms lay information infrastructure that can be controlled in much the same way. And unlike newspapers, digital platforms hold themselves out as organizations that focus on distributing the speech of the broader public. Federal law dictates that companies cannot ‘be treated as the publisher or speaker’ of information that they merely distribute.”

Thomas’s views appear to align closely with the GOP’s recent broadsides against the Section 230 of the Communications Decency Act, which many on the right (Trump among them) have sought to repeal. Indeed, many on the right praised his concurrence on Monday.

For Thomas, the question going forward should concentrate on who has the right to exclude others from a particular forum.

“The Second Circuit feared that then-President Trump cut off speech by using the features that Twitter made available to him. But if the aim is to ensure that speech is not smothered, then the more glaring concern must perforce be the dominant digital platforms themselves,” Thomas wrote. “As Twitter made clear, the right to cut off speech lies most powerfully in the hands of private digital platforms. The extent to which that power matters for purposes of the First Amendment and the extent to which that power could lawfully be modified raise interesting and important questions.”

Legal commentators immediately responded by saying that the archconservative justice on the court had essentially advocated for government taking over control of private corporations.

Thomas’s suggestion appears to have had its genesis in Richard Epstein’s comments in this FedSoc webinar from February https://t.co/7vTKSjrZPq

First Amendment attorney Ari Cohn said there was a stark difference between Thomas’s latest concurrence and his earlier opinions on compelled speech.

Clarence Thomas here: jk lol anything can be a public accommodation if you just believe because words have no meaning and what even is principle anyway. https://t.co/oDczaMcemM

Read the full concurrence below:

Thomas Concurrence by Law&Crime on Scribd