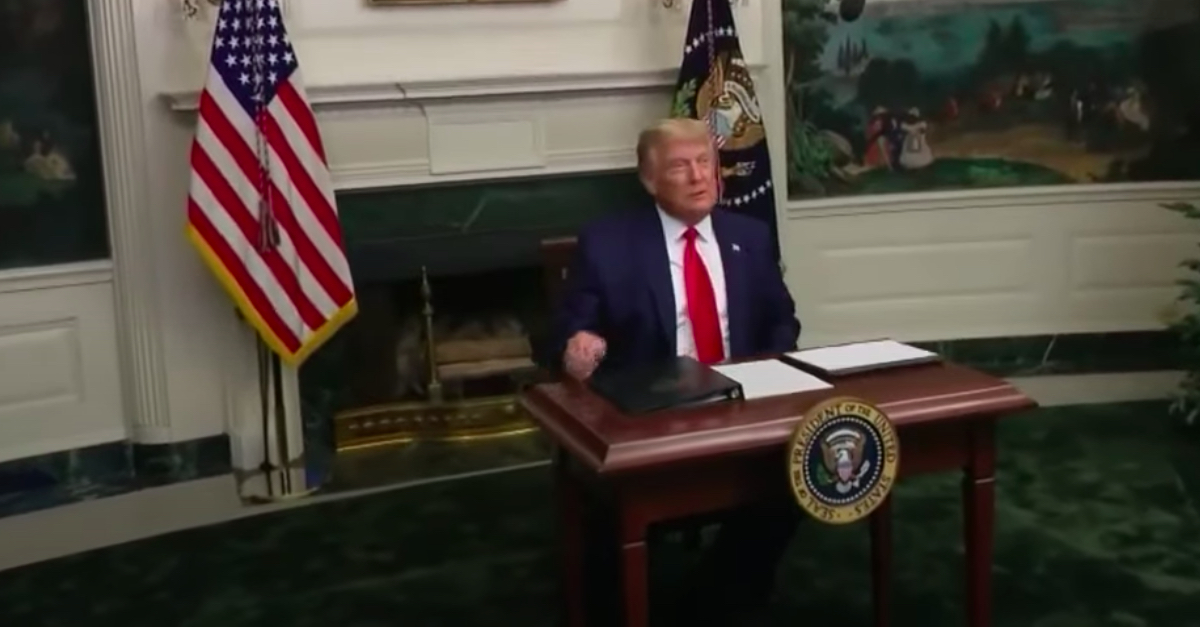 With the end in sight, the Trump administration is making a final push to overhaul Big Tech’s liability protections enshrined in Section 230 of the Communications Decency Act—the oft-misunderstood law that protects internet companies from being held liable for content created by third-parties that is hosted on their websites. President Donald Trump is lobbying Congress to repeal the provision as part of the National Defense Authorization Act (NDAA), Axios reported Monday evening.

President Trump renewed his attacks on Section 230 last week, accusing Twitter of posing a national security threat by creating false “trends” after the hashtag “#DiaperDon” went viral on Thursday, an apparent reference to the small desk the president sat behind during a pugnacious press conference.

The president responded later that night—on Twitter—calling for an end to Section 230.

“Twitter is sending out totally false ‘Trends’ that have absolutely nothing to do with what is really trending in the world. They make it up, and only negative ‘stuff’. Same thing will happen to Twitter as is happening to [Fox News] daytime. Also, big Conservative discrimination!” Trump tweeted.

“For purposes of National Security, Section 230 must be immediately terminated!!!” he added, just five minutes later in a separate tweet.

While the White House is seeking a full repeal of the law, Congress is reportedly seeking to amend the language of Section 230 to limit the protections offered to Big Tech. Generally, Trump and his supporters believe that social media platforms should be held liable for the manner in which they moderate and curate content, believing that Republican points-of-view are unfairly censored and suppressed (despite little, if any, evidence to support such a theory). Democrats, on the other hand, have derided companies like Twitter and Facebook for failing to prevent the widespread dissemination of disinformation.

Hoping to capitalize on bipartisan resentment of social media platforms, a source said to be familiar with the ongoing negotiations told Axios that the chairman of the Senate Commerce Committee, Sen. Roger Wicker (R-MS), has already proposed that his bill “limiting Section 230 protections” should be folded into the NDAA.

As previously reported by Law&Crime, President Trump has threatened to veto the must-pass NDAA unless a bipartisan slate of legislators agree to remove a provision that would require military bases currently named after Confederate leaders be renamed by the end of next year. However, the White House told lawmakers that the president would be willing to sign the military spending bill—including the provision stripping Confederate names—if  it also repeals Section 230, Axios reported.

“But Senate Republicans are instead trying to negotiate an alternative that would combine multiple bills aimed at reforming the law, including the bipartisan Platform Accountability and Consumer Transparency Act and Wicker’s Online Freedom and Viewpoint Diversity Act,” the report stated.

According to the report, Republicans are far more open to the idea of overhauling Section 230 than Democrats, making it extremely unlikely any tangible changes will be made to the law during Trump’s final few weeks in office.

The Trump-appointed head of the Federal Communications Commission (FCC) Ajit Pai recently announced that plans to move forward with rulemaking to “clarify” the scope of Section 230, but experts immediately panned his comments as misstating both the substance of the law as well as the FCC’s authority to interpret the meaning of the law.