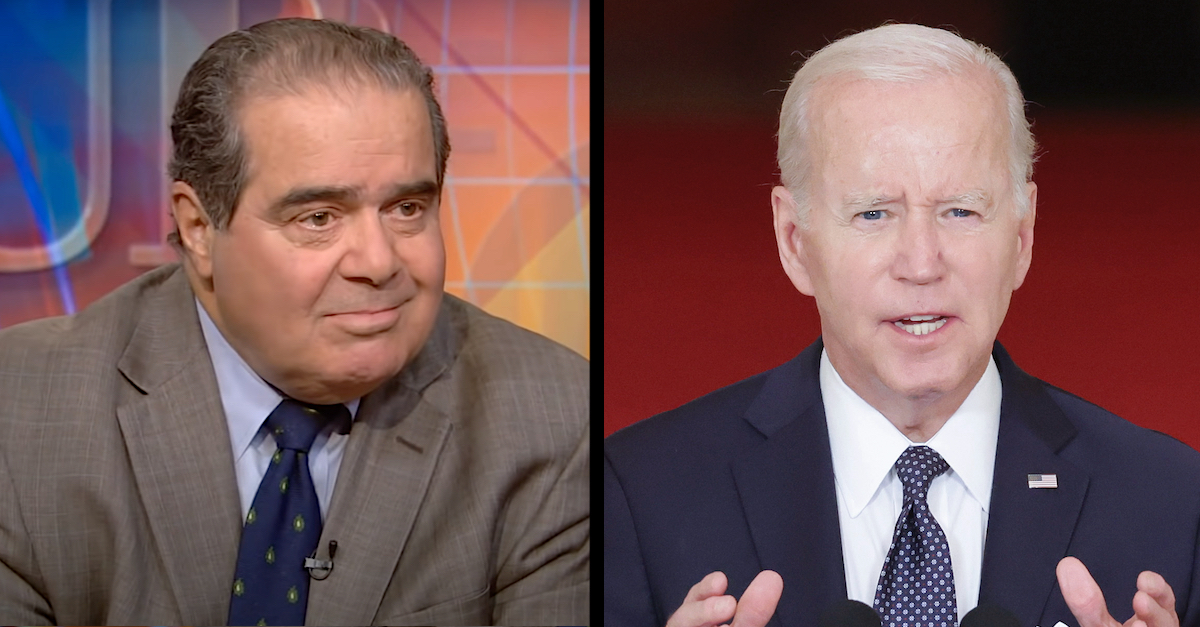 President Joe Biden on Thursday night quoted the late conservative Justice Antonin Scalia during a speech which proposed myriad gun control measures in the wake of more than two hundred mass shootings so far this year.

Biden said the issue was one of “conscience and common sense.”

“I want to be very clear:  this is not about taking away anyone’s guns,” Biden said. “It’s about vili — not about vilifying gun own — gun owners.  In fact, we believe we should be treating responsible gun owners as an example of how every gun owner should behave.  I respect the culture and the tradition and the concerns of lawful gun owners.”

Biden said “machine guns have been federally regulated for 90 years, and this is still a free country.”

The quote attributed to Scalia wasn’t a verbatim replication of the original, but it was close. The actual quote which comes the closest to the phraseology offered by Biden is from District of Columbia v. Heller, the 2008 U.S. Supreme Court case which affirmed an individual’s right to own some types of guns. The opinion held that the Second Amendment was a “guarantee” of “an individual right to possess and carry weapons in case of confrontation.”

Later in the Heller opinion, Scalia put it this way (again, boldface emphasis is added for comparison):

Like most rights, the right secured by the Second Amendment is not unlimited. From Blackstone through the 19th-century cases, commentators and courts routinely explained that the right was not a right to keep and carry any weapon whatsoever in any manner whatsoever and for whatever purpose. See, e.g., Sheldon, in 5 Blume 346; Rawle 123; Pomeroy 152-153; Abbott 333. For example, the majority of the 19th-century courts to consider the question held that prohibitions on carrying concealed weapons were lawful under the Second Amendment or state analogues. See, e.g., State v. Chandler, 5 La. Ann., at 489-490; Nunn v. State, 1 Ga., at 251; see generally 2 Kent *340, n. 2; The American Students’ Blackstone 84, n. 11 (G. Chase ed. 1884). Although we do not undertake an exhaustive historical analysis today of the full scope of the Second Amendment, nothing in our opinion should be taken to cast doubt on longstanding prohibitions on the possession of firearms by felons and the mentally ill, or laws forbidding the carrying of firearms in sensitive places such as schools and government buildings, or laws imposing conditions and qualifications on the commercial sale of arms.

While Biden missed the mark on some of the quote, the president was correct as to the basic premise of Scalia’s writing: that the right to own guns has always been limited in American jurisprudence.

We also recognize another important limitation on the right to keep and carry arms. Miller said, as we have explained, that the sorts of weapons protected were those “in common use at the time.” 307 U.S., at 179, 59 S.Ct. 816. We think that limitation is fairly supported by the historical tradition of prohibiting the carrying of “dangerous and unusual weapons.”

That passage was followed by nearly a full paragraph of citations to various cases and authorities which had in the past limited gun rights.

The core conclusion of Heller was as follows:

We are aware of the problem of handgun violence in this country, and we take seriously the concerns raised by the many amici who believe that prohibition of handgun ownership is a solution. The Constitution leaves the District of Columbia a variety of tools for combating that problem, including some measures regulating handguns, see supra, at 2816-2817, and n. 26. But the enshrinement of constitutional rights necessarily takes certain policy choices off the table. These include the absolute prohibition of handguns held and used for self defense in the home. Undoubtedly some think that the Second Amendment is outmoded in a society where our standing army is the pride of our Nation, where well-trained police forces provide personal security, and where gun violence is a serious problem. That is perhaps debatable, but what is not debatable is that it is not the role of this Court to pronounce the Second Amendment extinct.

After citing Heller on Thursday, Biden called for a “ban on assault weapons and high-capacity magazines,” and if that effort fails, he proposed raising the purchase age on such weapons from 18 to 21. He proposed additional background checks, safe storage laws, and so-called “red flag” laws. He further proposed repealing federal immunity provisions which protect gunmakers from liability.  He also said gun violence has resulted in a mental health crisis and suggested that additional counseling services should be made available to the victims of gun violence.

“In the ten years it was law, mass shootings went down,” the president said. He blamed Republicans for allowing the law to expire in 2004.

“Mass shootings tripled” after the 2004 expiration of the law, Biden said. “Those are the facts.”

Later, Biden said he wished to enact “safe storage laws” and require “personal liability for not locking up your gun.” He cited the Sandy Hook, Connecticut shooting as an example where a young man obtained unsecured weapons and used them to kill his mother and, later, to kill 20 children and six staffers at a school.

“If you own a weapon, you have a responsibility to secure it — every responsible gun owner agrees — to make sure no one else can have access to it,” Biden said. “To lock it up. To have trigger locks. And if you don’t, and something bad happens, you should be held responsible.”

Massachusetts, Oregon, Connecticut and a few other states have “safe storage” laws on the books.

The president said Americans need to have the freedom to go to school, to the grocery store, or to church without being killed.

The president then said CDC data indicated that guns, not car accidents or cancer, were the number one cause of death for children. He said more kids were killed by guns than were on-duty police officers or soldiers.

“For God’s sake, how much more carnage are we willing to accept?” he asked rhetorically.

The speech is below: