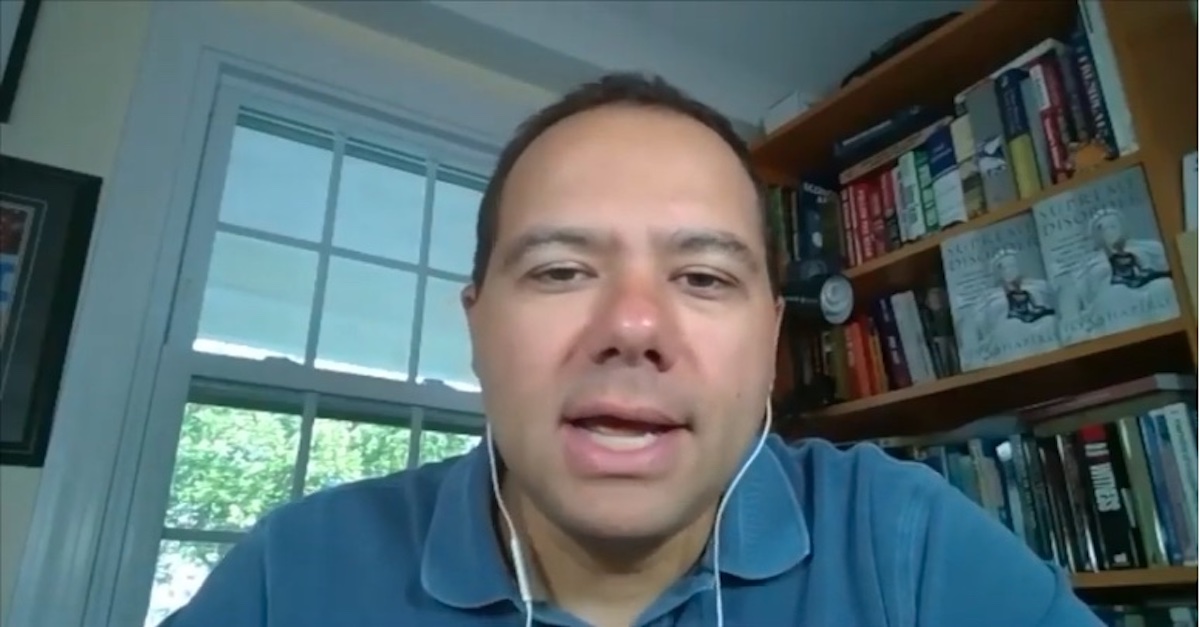 Ilya Shapiro is seen discussing the 2020-21 Supreme Court term in an interview with the John Locke Foundation (Aug. 3, 2021) (via YouTube/screengrab)

The Georgetown Law professor who was placed on leave earlier this year after tweeting that President Joe Biden‘s pledge to nominate the first Black woman to the U.S. Supreme Court would amount to a “lesser” qualified appointee officially has his job back.

Ilya Shapiro announced Thursday on Twitter that he will be heading to work as the Executive Director of Georgetown Law’s Center for the Constitution on Friday.

He had been on administrative leave since January, following a series of Twitter posts in which he bemoaned Biden’s campaign pledge to nominate a Black woman to serve on the Supreme Court.

“Objectively best pick for Biden is Sri Srinivasan, who is solid prog & v smart. Even has identity politics benefit of being first Asian (Indian) American,” Shapiro tweeted on Jan. 27. “But alas doesn’t fit into the latest intersectionality hierarchy so we’ll get lesser black woman. Thank heaven for small favors?”

“Because Biden said he’s only consider black women for SCOTUS, his nominee will always have an asterisk attached,” Shapiro also wrote. “Fitting that the Court takes up affirmative action next term.”

The following day, Shapiro walked his tweet back: “I apologize. I meant no offense, but it was an inartful tweet. I have taken it down.”

Days later, William M. Treanor, the dean of Georgetown Law, announced that he had placed Shapiro on administrative leave pending an investigation.

On Thursday, Treanor said in a statement that the investigation by the school’s Office of Institutional Diversity, Equity and Affirmative Action, as well as the Office of Human Resources, had been completed—and that Shapiro would soon be back on the job.

“As Mr. Shapiro posted the tweets on January 26, 2022, but his employment did not start until February 1, 2022, IDEAA and HR concluded that Mr. Shapiro was not a Georgetown employee at the time of his tweets,” Treanor said. “As such, he was not properly subject to discipline for them. As a result, he can begin his work as Executive Director and he will, subject to the Law Center’s normal Office of Academic Affairs processes, be able to teach upper-class elective courses as a senior lecturer.”

Treanor said that investigation also found that Shapiro’s tweets “had a significant negative impact on the Georgetown Law community, including current and prospective students, alumni, staff, and faculty, and they recommended that I put in place actions to address the negative impact that the tweets had on the law school community.”

Treanor said that he met with Shapiro to discuss the tweets, stressing that “although he has every right to express his views, I expect him, as a staff member at the Law Center, to communicate in a professional manner.”

“Georgetown Law is committed to preserving and protecting the right of free and open inquiry, deliberation, and debate,” Treanor also said in the statement. “We have an equally compelling obligation to foster a campus community that is free from bias, and in which every member is treated with respect and courtesy. I am committed to continuing to strive toward both of these indispensable goals.”

For his part, Shapiro said in a statement that he intends to welcome “a diversity of ideas.”

“I’m gratified that I’ll get to do the job for which I was hired more than four months ago,” Shapiro said Thursday on Twitter. “I look forward to teaching and engaging in a host of activities relating to constitutional education. As befitting a Center for the Constitution, all students and participants in my programs can expect to be accorded the freedom to think and speak freely and to be treated equally: a diversity of ideas will be most welcome. Let’s get to work!”

Shapiro’s reinstatement comes weeks before Ketanji Brown Jackson will be sworn in as the next Supreme Court justice after Breyer officially retires this summer. Jackson, who was confirmed in April, will indeed be the first Black woman to serve on the nation’s highest court.