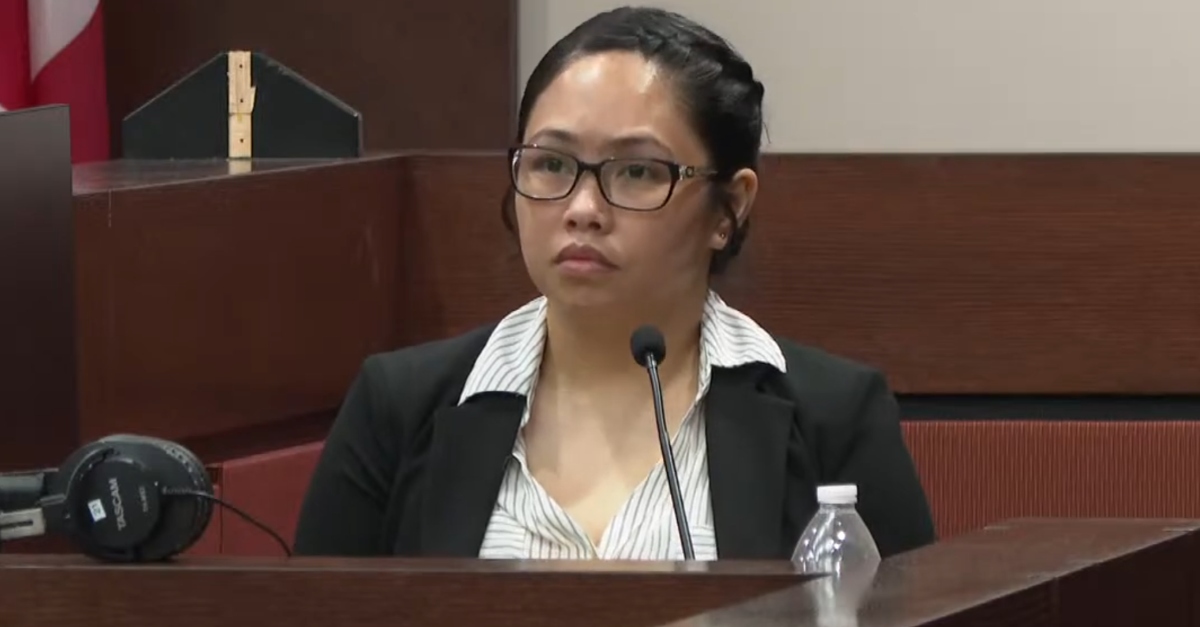 Katherine Magbanua, 38, was convicted on Friday of helping murder law professor Dan Markel, 41, in a 2014 assassination. She did not pull the trigger, but served as a pivotal middlewoman between the lead plotters and the shooters, prosecutors have said. Charges were first-degree murder, solicitation to commit murder, and conspiracy to commit murder.

“She herself was the stage manager in this thing,” prosecutor Georgia Cappleman said in closing arguments on Friday.

Defense lawyer Tara Kawass attacked the state’s case, saying that the prosecution cherry picked evidence and avoided details that showed Magbanua’s innocence. She called this the “anatomy of a wrongful prosecution.”

Markel, a law professor at Florida State University, was attacked at his home on July 18, 2014. He had pulled into the driveway while on the phone with a friend, and found someone there he did not know, officers have said. Shot twice in the face, he died the next day.

Prosecutors have said it was ex-wife’s family who set up the assassination for custody of Markel’s son. Markel had an ugly divorce with fellow FSU professor Wendi Adelson. Authorities are saying that Wendi’s brother Charlie Adelson—who was indicted last month in Markel’s death—used Magbanua, his then-girlfriend, to find someone to carry out the killing. That someone was Sigfredo Garcia, the father of Katherine’s children.

Garcia and Magbanua were first put on trial together in 2019, with Luis Rivera claiming that Garcia recruited him to help out in the murder. It was hardly a slam dunk case for the state. They managed to convict Garcia, but jurors were deadlocked on Magbanua.

Kawass, who said that both Garcia and Rivera are guilty, said the only evidence directly tying Magbanua to the plot was Rivera’s testimony. The attorney attacked his credibility in closing arguments on Friday. She pointed out that Rivera, facing the death penalty, took a deal for 19 years in prison. This would be served concurrently with a 12-year punishment in a separate case.

The attorney emphasized there were inconsistencies in his story, and she suggested that Rivera built his fabricated account based on “crumbs” that the investigators left for him. Rivera couldn’t even get his story straight on whether he or Garcia drove on the way up to Tallahassee, she said. He changed his story on the stand, first saying Garcia drove the whole way up until he was confronted with the truth. He then claimed they switched seats on the way up.

She said Rivera also did not know if there were one or two guns, could not get his story straight on how many trips they took, or what kind of animal he took a picture of in Tallahassee to post on Instagram–an owl or a lion.

Prosecutors said, however, said it was Charlie who was the mastermind behind the killing. Even the Adelsons’ mother Donna was allegedly involved, discussing the plot through code, though Charlie is the only member of the family who got charged; Wendi received immunity to testify. The family took Dan’s sons out of Tallahassee and changed their names from Markel to Adelson, Cappleman said.

“Just like that, their father was erased from their life,” she said.

The Adelsons have denied wrongdoing.

Authorities based their new arrest in part on apparently damning audio in which he appeared to discuss the plot with Magbanua at a restaurant. In it, Charlie discussed something about engaging with “Nazi shit,” and that he did not care about how much it will cost.

Kawass said authorities only recorded Charlie Adelson’s part of the conversation, not Magbanua’s—and even then, he was only talking in scenarios. She depicted her client as the overwhelmed listener in a one-sided conversation. She pointed out a friend of Charlie’s who discussed ending their friendship because Charlie would repeat the same thing over and over in different ways.