The attorney for a 75-year-old Colorado man who was hospitalized after being tased by police in his apartment in late May has shared a compilation of body cam video of the incident.

The video was released in connection with the case against now-former officer Nicholas Hanning, who is facing criminal assault charges for tasing Michael Clark, who was unarmed and mostly unclothed at the time the Taser was deployed. Although Clark answered the door with what the video described as a “shark-mouth sword,” video shows that he complied with commands to put the weapon down. 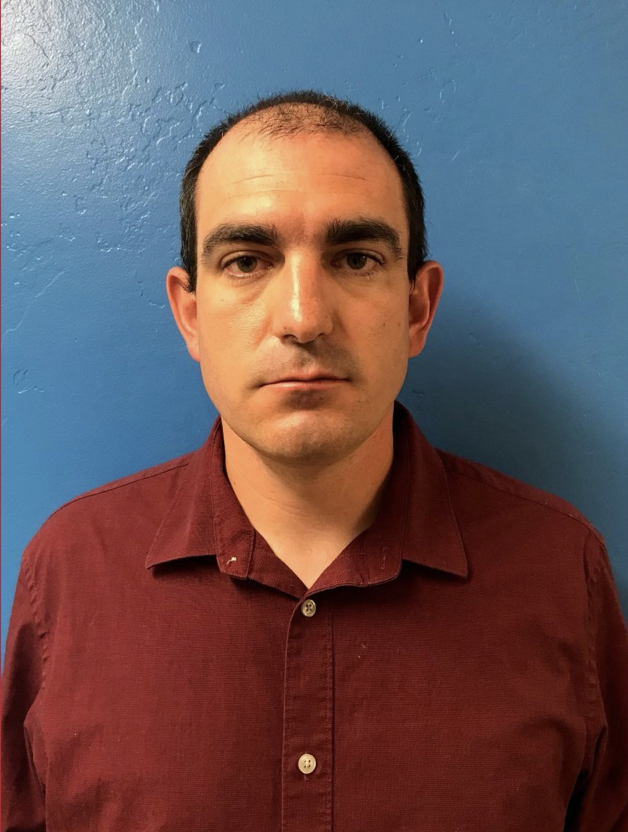 The video was shared by the Clark family’s attorney, Sarah Schielke, and it has been edited to include text and information that support Clark’s position that excessive force was used. It starts with Hanning and fellow officer Ellie Summers speaking with Clark’s neighbor, Brittany Odom, who said that Clark had banged on a shared wall between their apartments, yelling at her to “Shut the fuck up,” and then allegedly punched her in the face when she went next door to confront him. Odom said she had been sleeping at the time and not making any noise.

“He busted all of my shit, my nose, my mouth,” Odom can be heard saying, while text reading “She had no visible injuries” and “there was not a drop of blood anywhere” appears on the screen. The text, which was added by Schielke, also says Odom was drunk at the time.

All faces on the video, including Odom’s, are blurred, except for the officers and Clark. You can watch the officers’ body cam video at length below as well.

Hanning is then seen walking to the apartment next door and knocking on Clark’s door, but does not appear to identify himself as a police officer. When Clark answers, he can be heard saying “What do you want?” He is mostly unclothed, wearing only boxer shorts, and is apparently holding what police described as a weapon (a “machete”). Hanning kicks the door open, and he and Summers order Clark to put the blade down.

Clark complies, putting what turned out to be a so-called “shark-mouth sword” on top of a piece of furniture behind him. He then argues with the officers, while Hanning tells him to come out of the apartment and Summers tells him to get on the ground.

“Get on the ground,” Summers orders Clark. 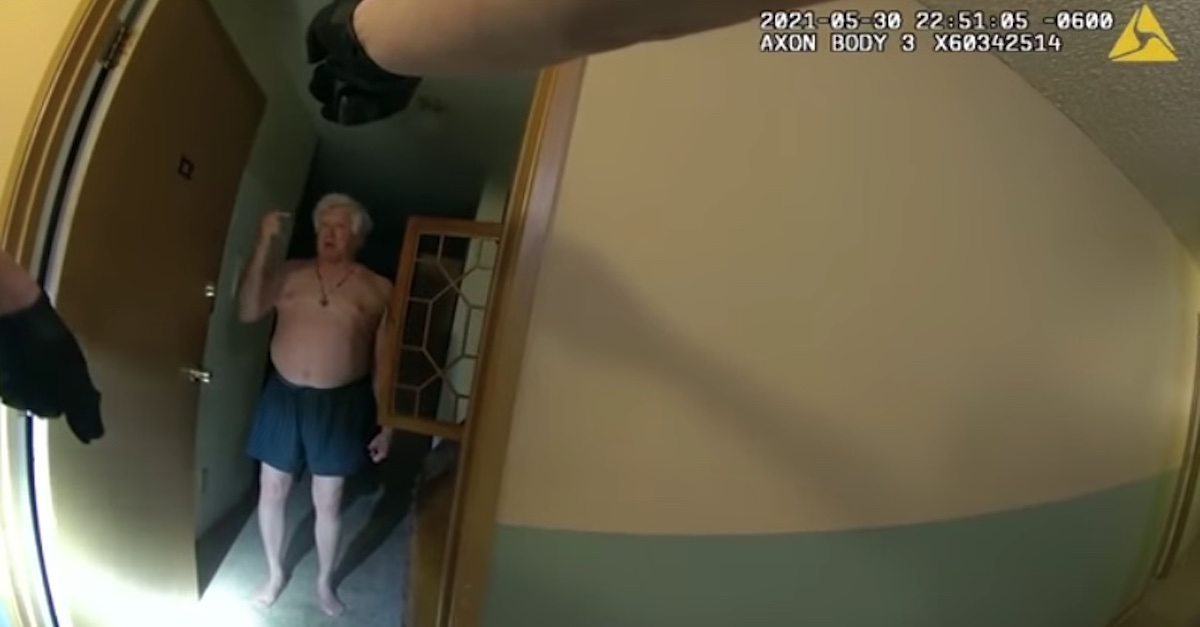 “No,” Clark says. “They hit that wall so hard, I thought they were going to come through the wall,” he adds, motioning in the direction of Odom’s apartment.

A moment later, as Clark stands inside his apartment, Hanning discharges his Taser, hitting Clark in his midsection. Clark is seen falling backward on to the ground.

As the officers approach Clark, Summers says he’s unconscious. Video shows that a chair appeared to have fallen on Clark’s face after he was tased, and it looks like in trying to move Clark out of the apartment the officers cause Clark’s head to hit a large piece of wood furniture.

Once the officers get Clark out of his apartment, Hanning is seen placing his knee on Clark’s neck as he lies face-down on the floor of the hallway. Then, as Summers appears to try to wake Clark up, Hanning’s body cam video shows Hanning removing the “shark-tooth sword” from where Clark had previously placed it—on top of a piece of furniture inside his apartment—and dropping it in the hallway in front of another apartment.

The video also shows EMTs attending to Clark, who, after regaining consciousness, says he doesn’t know what’s going on, or why he’s being detained. He also says that the shark-tooth sword was in his apartment, and says that he did not move it. He denies having punched Odom, or anyone, and insists he was “just laying in bed.”

“I did nothing,” Clark says repeatedly, as restraints are placed on him in the stretcher.

In addition to showing the body cam footage, Schielke’s video also alleges that Odom has a criminal history that includes charges of fraud for lying to police, felony aggravated domestic assault, and attempted murder. 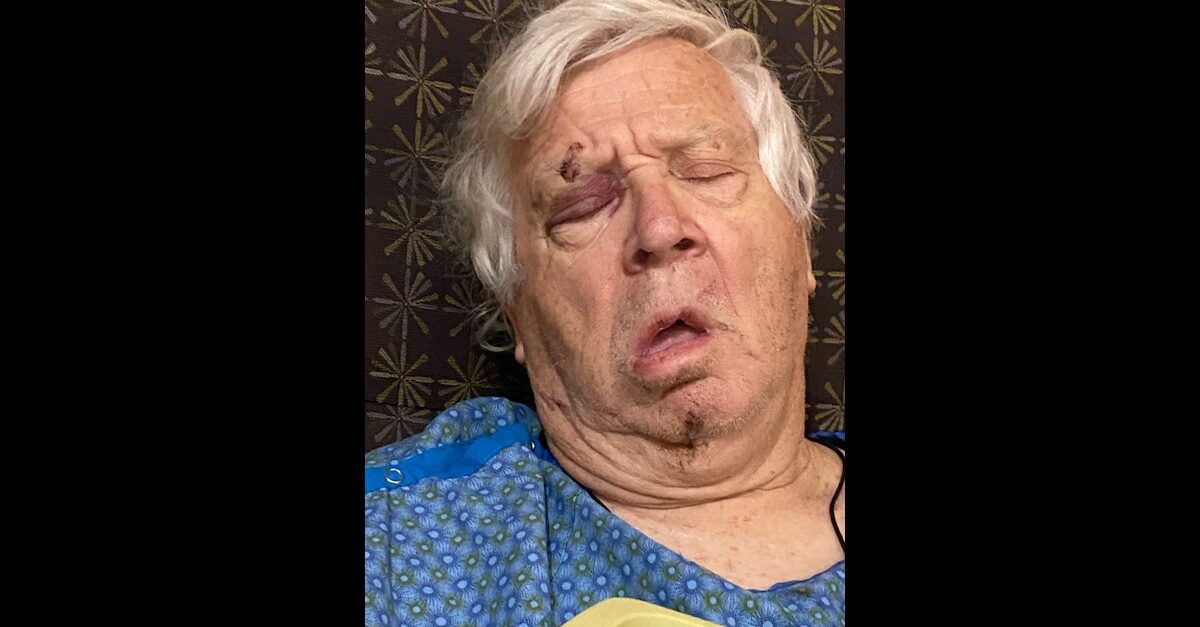 Clark suffered a stroke the day after the incident, according to Schielke, and has since been suffering multiple health problems. Schielke says that Clark is currently in a 24-hour nursing facility.

“We knew it was going to be bad from the affidavit for Officer Hanning’s arrest,” Schielke said of the video in a statement. “But that affidavit, it turns out, did no justice to the level of injustice seen on these videos. They need to be seen to be believed.”

The Idaho Springs police department fired Hanning after an investigation into the use-of-force incident. In the July 16 statement announcing Hanning’s termination, the police description of the video matches much of what is seen, confirming that the officers had not identified themselves as police when knocking on Clark’s door, and noting that Clark was not holding a weapon at the time he was tased.

The Idaho Springs police department declined to comment on the video itself, but told Law&Crime that “the original incident, in which officers were sent to investigate, has been closed with no pending charges for any involved party.”

UPDATE: After Schielke shared the police body cam video, Judge Cynthia J. Jones called a hearing Thursday morning for all the parties involved to address the video issue. Schielke told Law&Crime that she has been ordered to show how her release of the video didn’t violate a court order. The court hearing on that issue is set for August 12.

Schielke said that she was not told to take the video down.

According to a July 14 order from Jones, body cam video from the incident was to be released to the public by July 29, although the footage must be blurred to mask the identities of civilian witnesses and EMS personnel. The blurring must also cover any footage showing medical intervention and treatment.

The July 14 order also said that Schielke was to receive the unblurred video by July 28, and that “the victim or his representatives may not release this unblurred footage to the public absent a further Court order.” This video was provided to Schielke ahead of the July 28 deadline.

Schielke said that after she received the unblurred video, she had it blurred herself before posting it to YouTube.

“The DA kept deferring to how long the blurring takes,” Schielke told Law&Crime. “They’ve had the video for eight weeks now. I got the blurring done in three days.”

Schielke confirmed Thursday that she is no longer representing the Clark family’s interest in the criminal case, but that she is anticipating filing a civil lawsuit on Clark’s behalf.

District Attorney Heidi McCollum told Law&Crime that her office is still in the process of preparing the video pursuant to the court’s order, and that she intends to comply with the July 29 deadline to release the video to the public. The August 12 hearing will focus on whether Schielke’s addition of text and other information to the video violated the court’s order.

McCollum could not confirm the accuracy of the text and additional information, but said that her office wouldn’t editorialize the body cam video.

“We want to comply with whatever statutes are out there,” McCollum said, referring to the fact that newly-enacted Colorado legislation about the release of police body cam video has caused some confusion in this case. “We want to ensure that the victim’s rights are protected, and we want to ensure that the defendant’s right to a fair trial is protected. If not, that can lead to an appeal, which can cause more trauma to the victim, and that’s the last thing I want.”

[Images via screengrab of video provided by Sarah Schielke]