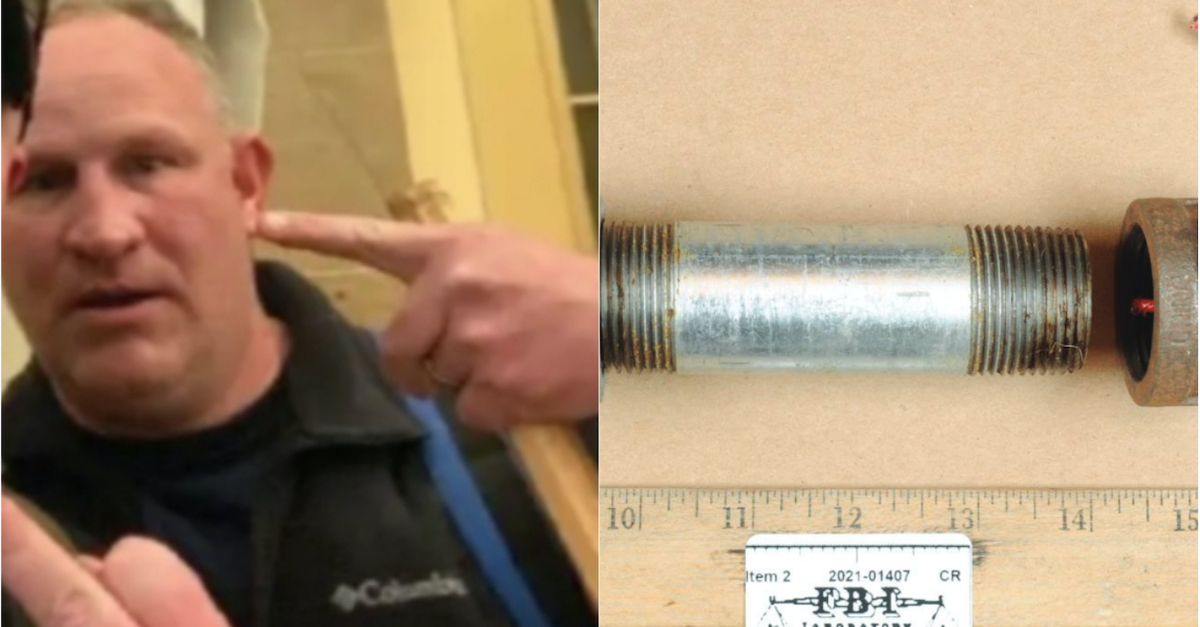 Thomas Robertson is seen in the image on the left, via an FBI affidavit. The image on the right depicts a “Main Charge Container and Hobby Fuse – Non-Electric Fuzing System,” as labeled in the FBI report as an item allegedly found in his home.

The day after urging a federal judge to keep an ex-police officer behind bars pending trial, federal prosecutors on Thursday revealed the FBI report concluding that components found in the accused U.S. Capitol rioter’s home “could be used to readily assemble” an “improvised explosive device.”

Thomas Robertson, a 47-year-old former Rocky Mount, Va. police officer, has been released since less than a week after his arrest in January. The discovery of those materials could jeopardize that freedom. Robertson claimed that what prosecutors describe as a “partially-assembled pipe bomb” found in his home in June was actually a “prop for training.”

Unsatisfied with the explanation, prosecutors provided U.S. District Judge Christopher R. Cooper with a copy of the FBI’s report featuring analysis by the Quantico Laboratory.

Dated Wednesday, the report materials that authorities claim the FBI found when searching Robertson’s home less than a month ago on June 29: a powder sample, a metal pipe with two end caps, a fuse and a piece of a fuse.

The Quantico lab’s conclusion was categorical.

“It is the opinion of this Explosives and Hazardous Devices Examiner that contained in the submitted items of evidence are components that could be used to readily assemble one (1) improvised explosive device (IED),” the report states.

Short for “Advanced Law Enforcement Rapid Response Training,” ALERRT was developed by Texas State University and was subsequently named by the FBI as a standard in active shooter response training. The FBI’s website discusses the program in greater detail.

“Furthermore, this partially assembled pipe found inside the box is not a destructive device as this device is used to teach students (Safety) in law enforcement as part of the ALERRT class,” his defense memo states. “Mr. Robertson was a level II instructor for ALERRT. This pipe is not active as it is a prop for training.”

Robertson was reportedly fired from his job in late January.

The materials in question were allegedly found in his home in June.

Despite the box’s markings labeling the contents a “prop,” the FBI said that the components could have formed a deadly weapon.

“The resulting explosion from an IED of this type could cause property damage, personal injury and/or death,” Christopher Rigopoulos, of Quantico’s explosives unit, wrote.

Assistant U.S. Attorney Elizabeth Aloi called that conclusion “highly relevant” to the judge’s pending ruling on whether to revoke Robertson’s conditions of release.

“Attached is an FBI laboratory report received by the undersigned this morning concluding that the defendant possessed components that could be used to readily assemble an improvised explosive device (IED), despite being ordered not to possess a firearm, destructive device, or other dangerous weapon,” Aloi wrote on Thursday.

Robertson appeared enthusiastic about the siege of the U.S. Capitol.

Robertson’s attorney Rollins, from the Washington, D.C.-based firm Rollins & Chan, did not immediately respond to an email requesting comment.

Read the FBI report below: