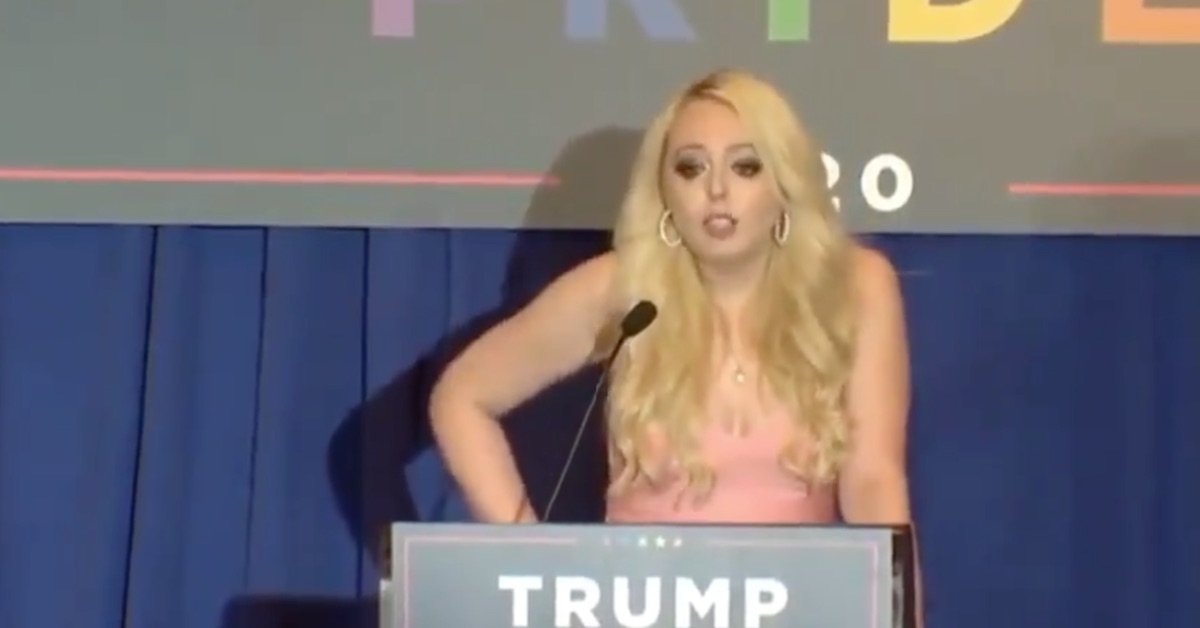 If you haven’t seen Tiffany Trump’s cringefest of a speech on Saturday night, you’re probably feeling as if you just ate cheap sushi. You know something is very wrong, even if you can’t quite articulate precisely what.

Allow me to help. Tiffany’s stumbling trek through the imaginary rainbow forest where her dad is the greatest LGBTQ+ ally of all time hit all of the usual markers. The messaging went: I HAVE GAY FRIENDS! MY DAD HAS GAY FRIENDS! HE HAS ALWAYS LOVED THEM! And to be fair, compared with the president’s blatant stoking of racial tensions, his anti-LGBTQ+ actions are far lower profile.

Still, while scapegoating the LGBTQ+ community and publicly vowing to erode their rights isn’t a hit on the campaign trail, it is very much Donald Trump’s official legal position. Tiffany is a lawyer now, and she should know all if this. But since it appears she doesn’t, I’ve put together a brief (and not necessarily exhaustive) refresher on how her dad has systematically opposed LGBTQ+ rights since taking office.

1. Trump bragged about—and then followed through with—a ban against transgender people serving in the military.

Trump’s ban on military service for transgender people was a priority for the administration, coming just months after he took office. The policy then became the subject of lengthy litigation, in which the Trump administration made the argument that the lowest level of legal scrutiny should be applied to discrimination against transgender people.

Fired Attorney General Jeff Sessions issued guidance to the executive branch of government to interpret “religious liberty” in a way that would allow for discrimination on the basis of gender identity and sexual orientation. Although LGBTQ+ legal issues were not specifically mentioned in Sessions’ memo, that was the meaning.

3. The administration fought for employers’ right to discriminate against LGBTQ+ people in the workplace.

Under Trump, the DOJ, several times, took the legal position that employers should be able to legally discriminate against individuals on the basis of sexual orientation and gender identity. Ultimately, the issue made its way to the United States Supreme Court, where Trump-appointed Justice Neil Gorsuch dashed the administration’s hopes by penning something of a surprise ruling against the DOJ’s position. Under that ruling, sexual orientation and gender identity are now entitled to legal protection under Title VII of the Civil Rights Act.

4. The administration sided against transgender students.

The Trump administration, through its infamous “Dear Colleague Letter,” took the position that schools can force transgender students to use the bathroom that corresponds with their “biological gender” instead of the one that corresponds with their gender identity. The guidance culminated in the lawsuit of Gavin Grimm. The administration ultimately changed its guidance in the wake of Gorsuch’s opinion in Bostock v. Clayton County.

5. The administration supported discrimination against same-sex couples who wish to adopt children.

The Department of Health and Human Services (HHS) proposed a rule that would allow adoption and foster care agencies to discriminate on the basis of sexual orientation and gender identity. Given the significant number of same-sex couples who adopt children, this rule was especially harmful to the LGBTQ+ community.

The administration even submitted a brief that argued that a taxpayer-funded agency should have the right to use foster care and adoption agencies that discriminate against same-sex couples.

Under the rule, shelters can legally ignore a person’s gender identity and house them according to their assigned sex at birth; this means, for example, a transgender woman could be turned away from a women’s shelter and forced to go to a men’s shelter.

7. The administration supported private businesses that wish to discriminate against same-sex couples.

The DOJ submitted an amicus brief in the Supreme Court case over whether a Colorado baker could legally refuse service to a gay couple on religious and freedom of speech grounds. The case ended with a win for the baker, albeit a narrow one.

8. The administration is attempting to undermine important LGBTQ+ healthcare measures.

The administration threatens the healthcare of LGBTQ+ Americans in its quest to completely eliminate the Affordable Care Act (ACA). Protection for pre-existing conditions (such gender dysphoria or HIV/AIDS) is essential to the health of many LGBTQ+ Americans; without the ACA’s legal protection, insurance plans could very well exclude coverage or transition care to those individuals.

9. The administration opposes legislation that would protect LGBTQ+ people from discrimination.

The Trump Administration officially opposed the Equality Act, a landmark law that would increase protections against discrimination for LGBTQ+ people.