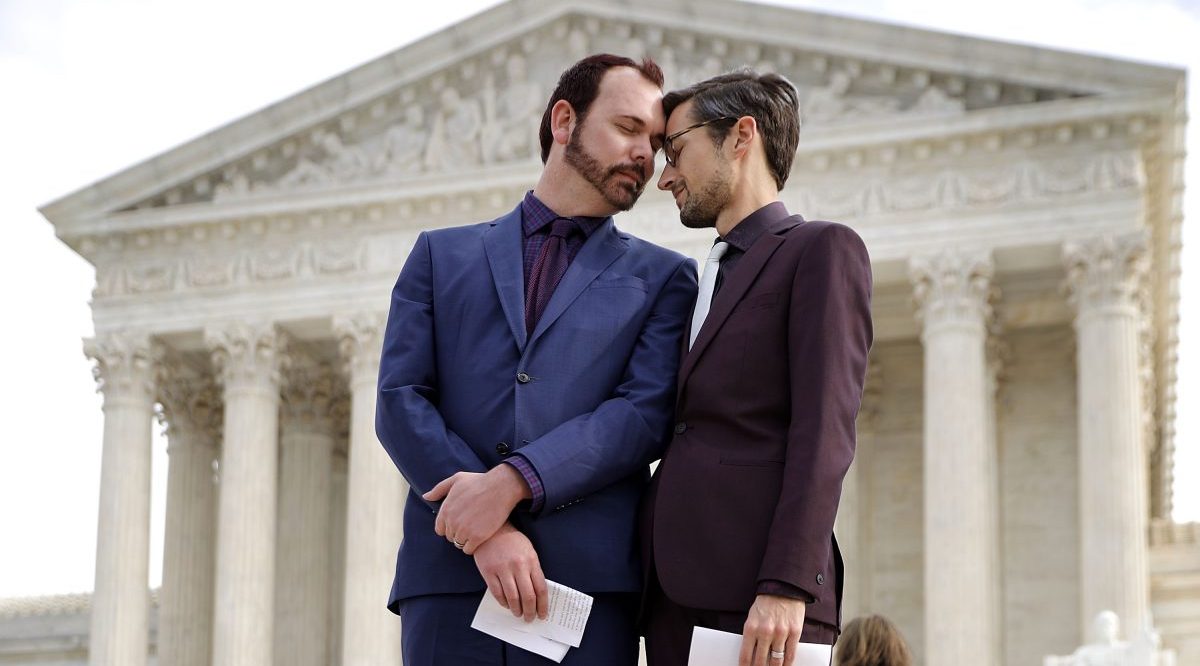 Well, that didn’t take long. You had to know that the bigot brigade would be out in full force celebrating how SCOTUS’ ruling in the Masterpiece Cakeshop case means it’s open season for hating on gays. Right. Because it’s reasonable to assume that the Supreme Court thinks discrimination is a great idea.

One particular master of cognitive processes is Jeff Amyx, the owner of Amyx Hardware & Roofing Supplies in Tennessee. Following the Masterpiece ruling, Amyx posted a sign saying “No Gays Allowed” in front of his store. When asked about it, he lamented his personal persecution to the local news, complaining that “Christianity is under attack.” Amyx also expressed concern that his celebration over the Masterpiece ruling might be short-lived: “Right now, we’re seeing a ray of sunshine. This is ‘happy days’ for Christians all over America, but dark days will come.”

It’s true that Jack Phillips won his Supreme Court battle – an unfortunate outcome in that the case presented an opportunity for SCOTUS to slap down the argument that free exercise of religion requires the right to discriminate against gays. What actually happened (and I’ll try to use small words here, in case Amyx and his friends are interested learning a little law) is that the Court found that Colorado had not given the baker a fair hearing.

Justice Anthony Kennedy, who penned the opinion in Masterpiece Cakeshop as well as several other important gay rights cases, was clear that the ruling did not mean gay people aren’t entitled to have civil rights:

Our society has come to the recognition that gay persons and gay couples cannot be treated as social outcasts or as inferior in dignity and worth. For that reason the laws and the Constitution can, and in some instances must, protect them in the exercise of their civil rights.

Kennedy went on to limit the Masterpiece decision in two important ways.

One of the reasons the Masterpiece case captured so much public attention is that it presented an interesting intersection of law and facts: where does art end and commerce begin? No one has seriously doubted that if a priest or minister were to refuse to conduct a same-sex marriage ceremony, that he’d be well within his rights to do so based on well-settled principles of religious freedom. Similarly, it’s pretty clear that public accommodation laws appropriately prohibit shopkeepers from throwing out gay customers from, say, a supermarket or bank, purely on the basis of their sexual orientation. The wedding-cake issue presents a unique challenge, falling somewhere midway on that spectrum.

Justice Kennedy did his best to remind everyone that had we been talking about something less artistic than a decorative cake, we wouldn’t have needed to have all this hoopla – and that even the lawyers for the cake shop know it:

Petitioners conceded, moreover, that if a baker refused to sell any goods or any cakes for gay weddings, that would be a different matter and the State would have a strong case under this Court’s precedents that this would be a denial of goods and services that went beyond any protected rights of a baker who offers goods and services to the general public and is subject to a neutrally applied and generally applicable public accommodations law.

That might have been good news for Jack the Baker, but it’s decidedly less helpful for Jeff the Hardware Guy. Someone should probably tell him that unless he’s holding wedding ceremonies in the screwdriver aisle, he’s going to have to treat gay customers like customers.

Let’s remember that this case was an appeal from a decision made by the Colorado Civil Rights Commission against Masterpiece Cakeshop. That case resulted when same-sex couple David Mullins and Charlie Craig filed a discrimination complaint, and the Commission ruled that bakery had, in fact, violated state law. The problem, though, was that (at least according to the SCOTUS majority) when the Commission reviewed the charges against Masterpiece Cakeshop, they weren’t exactly fair about it.

The Court gave several examples of how the Commission demonstrated bias against Jack Phillips – such as assuming from the start that Phillips’ religious belief was insincere, even describing his faith as, “one of the most despicable pieces of rhetoric that people can use.” Perhaps more important than the Commission’s hostile-sounding language, though, was the fact that while Phillips’ case was pending, the same Commission ruled that other bakers had acted lawfully when they declined to create cakes demeaning gay persons or gay marriages. The Court ruled that the disparity in outcomes indicated a lack of neutrality on the Commission’s behalf.

That all adds up to the idea that the Colorado Civil Rights Commission should have done a better job–a point that isn’t entirely unreasonable given the underlying facts.  What it does not mean, though is that as a blanket rule, religion trumps law. What’s likely to happen is that another business owner will discriminate against another gay couple in violation of another public accommodation law; when that happens, we’ll likely be right back where we were before anyone had heard of Jack the Baker.

There are times when the free exercise of religion renders certain individuals exempt from following certain laws in certain circumstances. That was the case before Masterpiece Cakeshop, and it’s still the case now.

While gay-hating conservatives may be missing the point by celebrating the Masterpiece decision, supporters of LGBT rights aren’t wrong in being disappointed by it. The ruling may not have wide legal significance, but clearly has the power to inspire hateful consequences. Bigots are by nature ignorant. They are not likely to pay an iota of attention to legal nuances or limiting language; instead, they will adopt Jack Phillips’ individual victory as an allegory of the triumph of Christianity over sexuality, and use the precedent to (illogically, but still persuasively) justify discrimination and hate in the days to come.

As for our favorite gay-hating hardware store, though, the internet is seeking its own form of retributive justice:

Love that amyx hardware is now listed as a gay bar on google reviews. #amyxhardwareboycott pic.twitter.com/biL7pnCCKy