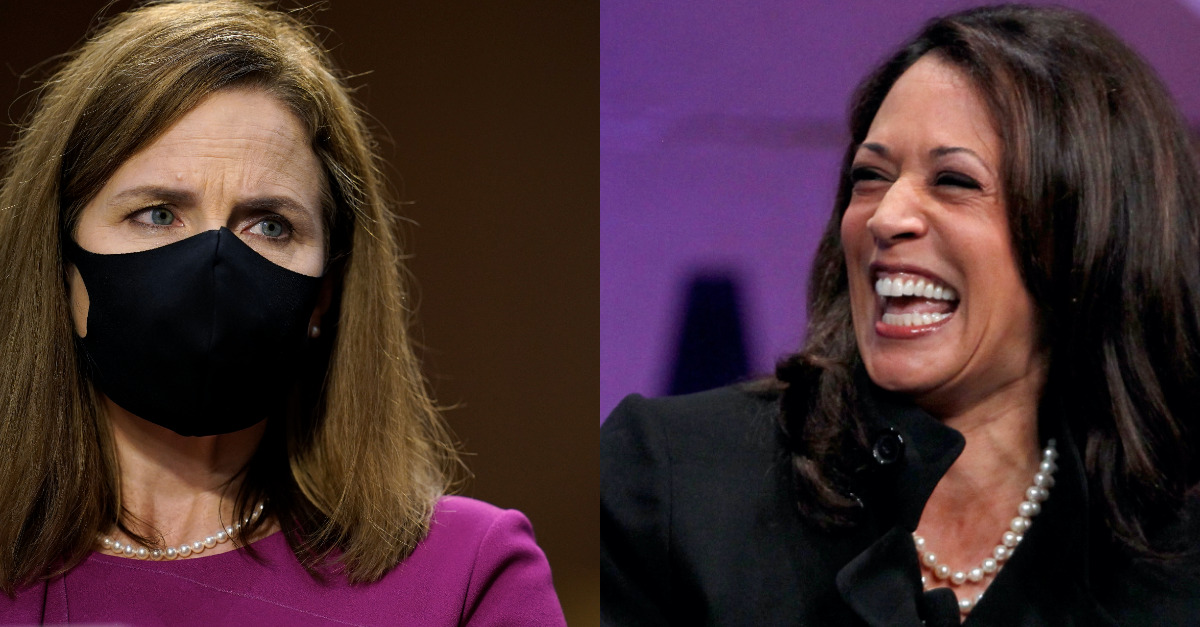 Now that the average American is following the Supreme Court almost intently enough distinguish David Souter from Stephen Breyer, politicians are falling all over themselves to dramatize the once dull and unremarkable process of seating a new justice. Set against the backdrop of intense political warfare stemming from Merrick Garland’s doomed nomination, Democrats appear determined to characterize the confirmation of Judge Amy Coney Barrett as a death sentence for every bit of their agenda.

At the forefront of the hysteria is Democratic Senator and Vice Presidential Nominee Kamala Harris (D-Calif.).

November 10. That’s when the United States Supreme Court is set to hear a case to strike down the Affordable Care Act.

Senate Republicans are fast tracking this nominee today in order to ensure that happens.

“November 10. That’s when the United States Supreme Court is set to hear a case to strike down the Affordable Care Act,” warns Harris. “Senate Republicans are fast tracking this nominee today in order to ensure that happens.”

Sure, it sounds reasonable to say that Trump’s nominee would be the justice to strike the fatal blow to the heart of Obamacare. After all, I just heard Senator Ted Cruz on C-SPAN saying that whole point of a three-branched government is to give Republican presidents additional authority any time the Senate has a Republican majority. It’s not all that shocking to suggest that Justice Barrett could single-handedly destroy American healthcare. The thing is, though, it’s just not true.

Despite the campaign-ready messaging of it all, fast-tracking a vote on Barrett isn’t likely to strike a death blow to Obamacare. And as much as I enjoyed Harris’s exquisite side-eyes during the VP debate, I’d like to cordially invite her to stop nonsensically misinforming the electorate. We Americans have been dealing with Donald Trump’s idiotic and incessant hyperbole since 2016. We need a break. Senator Harris is a smart lawyer, and she knows damn well that even if Barrett were to vote in line with the Trump administration on the Affordable Care Act (ACA), “ACB” would likely find herself on the dissenting end of a 6-3 vote.

The litigation over the ACA is not really about whether the ACA itself is constitutional – it’s about the far less-sexier concept of “severability.” And six justices (all but Neil Gorsuch and Clarence Thomas) have already gone on record and proven that they may very well be inclined to vote against the Trump position on the ACA’s severability.

Statutes, particular lengthy ones, often contain portions that are later deemed by courts to be unconstitutional. The question of whether the problematic portion is cut out—or “severed” from the entire law—or whether one bad statutory piece spoils the bunch, is one with which courts are used to grappling.

The case headed to the Supreme Court for oral arguments on Nov. 10 reviews the fate of the “individual mandate” portion of the ACA. The Department of Justice is arguing that the “entire ACA must fall” as a result of the individual mandate having been struck down. The issue at stake isn’t interpretation of the ACA so much as it is, “what do we do with the rest of the ACA now that we know that one part of it is problematic?”

SCOTUS’s likely ruling on the severability of the ACA’s individual mandate is neither mysterious nor hinges on Amy Coney Barrett’s vote. SCOTUS recently handed down rulings in two cases where severability was a primary issue.

In the first, Justice Brett Kavanaugh penned the opinion for the 7-2 majority in Barr v. American Assn. of Political Consultants. The case looked at a portion of the Telephone Consumer Protection Act (TCPA) that banned cellphone robocalls – unless those calls were made to collect government debts. Seven justices agreed that the clause allowing government debt collection was a 1A violation – but they weren’t willing to throw out the TCPA entirely.

Noting that Supreme Court opinions have “developed a strong presumption of severability,” Justice Kavanaugh and the majority ruled that the exception for government debts could be severed from the rest of the TCPA.

“The Court presumes that an unconstitutional provision in a law is severable from the remainder of the law or statute,” Kavanaugh continued. He explained that this particular tenet of interpretation has roots all the way back to Marbury v. Madison.

Severability came up again in Seila Law v. CFPB, in which SCOTUS decided what to do with a provision in the Dodd-Frank Act that allowed removal “for cause” removal protection for the director of the Consumer Financial Protection Bureau (CFPB). The provision was struck down as having violated separation of powers, but SCOTUS would not use that defect to strike down the statute in its entirety.

In that case, Chief Justice John Roberts wrote for the majority, holding (again) that the offending portion of the statute should simply be severed from the remainder: “We think it clear that Congress would prefer that we use a scalpel rather than a bulldozer in curing the constitutional defect we identify today.”

Now it’s true that in both of the recent cases raising severability, the statutes themselves contained “express severability clauses” – meaning that Congress had specifically said it wished any non-offending portion of the statute to survive in the event a court took issue with some portion of the law. However, both Roberts and Kavanaugh made a point to explain even without specific guidance, they’d have severed anyway, because there should be a presumption in favor of severability.

The ACA does not contain an express severability clause; it would be up the justices to decide whether, during an unprecedented pandemic, it will throw out an entire healthcare statute or simply strike down the portion deemed unlawful. Everything – from past precedent to recent precedent to the climate of the times – weighs in favor of the Court choosing to sever the individual mandate from the remainder of the ACA.

Severability isn’t overturning Roe v. Wade, and it isn’t a novel question of law. It’s an entirely non-radical move very much in line with the Court’s usual decision-making process.

I spoke Monday with University of Iowa College of Law Professor Andy Grewal, who has written extensively on Trump-related legal issues. He agreed that casting Barrett as a villainous vote against the ACA is inaccurate. “Whatever constitutional concerns Professor Barrett may have had about the ACA,” said Professor Grewal, “don’t translate very well to the current case.”

He explained that because Congress has already chosen to remove the individual mandate without repealing the remainder of the ACA (despite its legislative authority to do so), the DOJ would be left to make the unconvincing argument that, “Congress wanted the entire ACA to fall.”

“That argument is not likely to win a majority of Justices,” predicted Professor Grewal. “I would be highly surprised if Justice Barrett cast a deciding vote in the case.”

You may be asking why, if SCOTUS’s outcome on the severability of the ACA’s individual mandate is practically a foregone conclusion, is the DOJ is even arguing otherwise? Unfortunately for our republic, the answer to that is something we’ve heard many times before: it’s a bad idea, but Trump is insisting the DOJ do it anyway for political reasons.

The DOJ has already advised Trump against the strategy, but even William Barr’s advice seems to have gone unheeded.

Now, conservatives appear equally frustrated with both Trump’s insistence on boarding a sinking ship and Democrats’ mischaracterization of Barrett as its captain.

If you’re a progressive eager to press for Court-packing, what sense does it make to put all your marbles on ACA threat that is likely to collapse at oral argument on Nov. 10? #Strategery

Yeah, I don’t get this either. I also don’t get why the administration is pushing a politically and legally stupid case its lawyers have told the White House it will lose. https://t.co/wmyLys2Kqf

So where does that leave us?

The DOJ is litigating Trump’s personal vendetta against Obamacare before a Supreme Court that most legal experts believe will rule against the administration. Meanwhile, Democrats, potential VP included, are stoking fears that Barrett can single-handedly steal both that win and healthcare from millions of Americans. Evidence suggests otherwise.