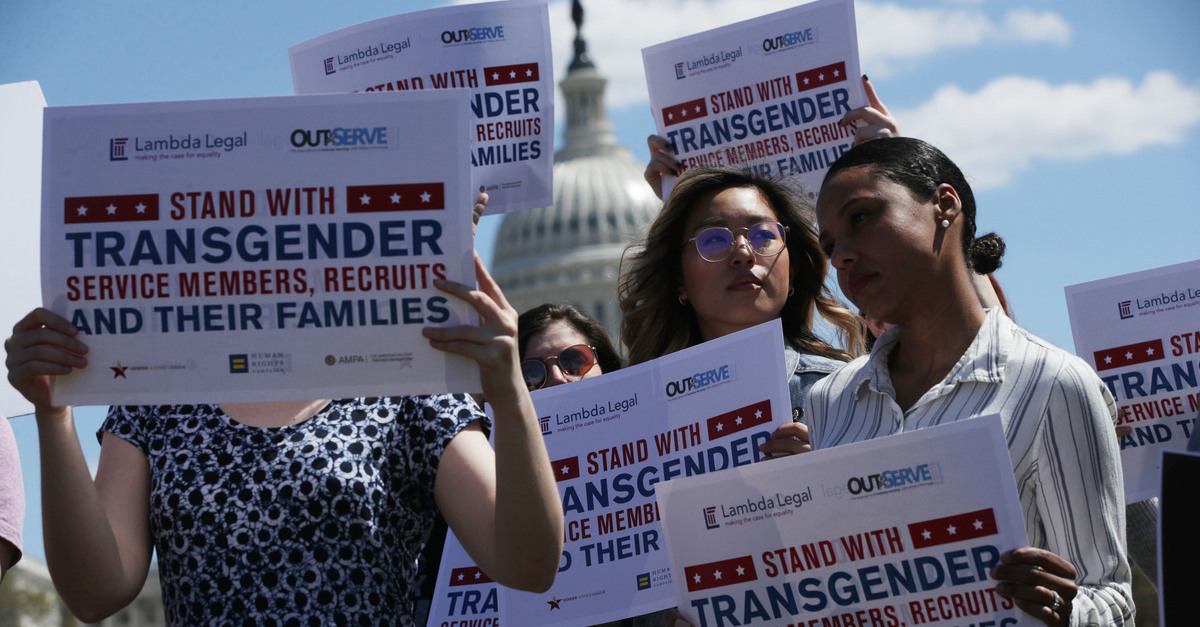 The Ninth Circuit just handed the transgender community a win wrapped in a losing ruling.

The appeal originated from the District Court’s ruling in Karnoski v. Trump—the transgender military ban case. The Ninth Circuit’s specific ruling wasn’t particularly shocking or momentous, because it amounted to little more than tying up loose ends.  However, the court’s resulting decision set out a legal standard for all things transgender moving forward – and that is a big deal.

In July 2017, Trump announced a ban on transgender military service via tweet.  Almost immediately, four federal judges issued injunctions, temporarily stopping the ban from being implemented on the grounds that it violated the constitutional rights of transgender Americans. In January 2019, the U.S. Supreme Court lifted two of those injunctions, and the other two were lifted in turn by lower courts. The Pentagon then carried out the ban.

On Friday, the Ninth Circuit overturned a lower court ruling that the same transgender ban was unconstitutional, as was expected.  None of that is great for the transgender community.  However, all of it is specific to military service, and Trump’s particular directive on it.

The Ninth Circuit’s hands were tied; after the SCOTUS ruling, lifting the injunction was the appropriate course of action.  But the court took the opportunity to answer a specific question of profound importance and broad application for the days to come: what kind of scrutiny is appropriate for laws single out transgender people?

A little primer on “scrutiny”:

Under the Fifth and Fourteenth Amendments, Americans are entitled to equal protection under the law. What that’s come to mean is that there are rules to be applied when laws treat one group of people differently from another group. For example, when a law singles out people on the basis of race, religion, or national origin, that law is presumed unconstitutional unless it survives the most exacting of standards (referred to as, “strict scrutiny.”) By contrast, when law separates folks on the basis of something less suspect – such as their income or educational level, occupation, or IQ – it need only be meet the low “rational basis” threshold. Classifications on the basis of sex (the traditional legal word for “gender”) are subject to “intermediate scrutiny.” Yes, that’s where the title of the RBG biopic comes from.

Scrutiny and the LGBT community:

For years, much debate has ensued over whether laws that single out LGBTs are entitled to the intermediate scrutiny afforded to traditional legal issues about gender (usually, involving discrimination against women).  The question is an important one, because such a designation of intermediate scrutiny would mean invalidating most laws that affect the LGBT community differently from other Americans.

Because the stakes are so high, the legal dispute encompassed the nature of homosexuality and transgenderism themselves. If a person’s sexual orientation and identity are fixed and based in biology, it follows that those characteristics are entitled to the same legal protections as race or national origin. Alternatively, if sexual orientation and identity are choices, a lower legal standard is more appropriate.

In 2017, the Seventh Circuit boldly ruled in an employment case that for legal purposes, discrimination against LGB people isgender-discrimination because at its heart, it is about gender non-conformity.  The court wrote:

Now, the Ninth Circuit has gone a step farther – and ruled that laws effecting transgender discrimination are specifically entitled to intermediate scrutiny. In its opinion, the court referred litigants to its past decision about the military’s “Don’t Ask, Don’t Tell” policy, in which it mandated an intermediate scrutiny standard for any law that, “attempts to intrude upon the personal and private lives of homosexuals…”. Handing the transgender military ban back down to the lower court, the Ninth Circuit directed that in light of past precedent, “the district court should apply a standard of review that is more than rational basis but less than strict scrutiny.”

As an extra measure, the Ninth Circuit also called out the Trump administration for its nonsensical argument that the transgender ban wasn’t really about transgenders at all:

The court Defendants alternatively argue that rational basis review applies because the classifications challenged here are based on “gender dysphoria” and “gender transition” rather than transgender status. This too is unpersuasive. On its face, the 2018 Policy regulates on the basis of transgender status. It states that “Transgender persons with a history or diagnosis of gender dysphoria are disqualified from military service…

Although the U.S. Supreme Court’s rulings on the transgender military ban do not bode well for transgender discrimination generally, SCOTUS hasn ’t yet ruled on the specific issue of appropriate constitutional scrutiny. For now, the Ninth Circuit’s ruling on intermediate scrutiny will be the law of (part of) the land.