1 Person Was Shot During Riot Between Armed Left- and Right-Wing Groups in Washington State: Police 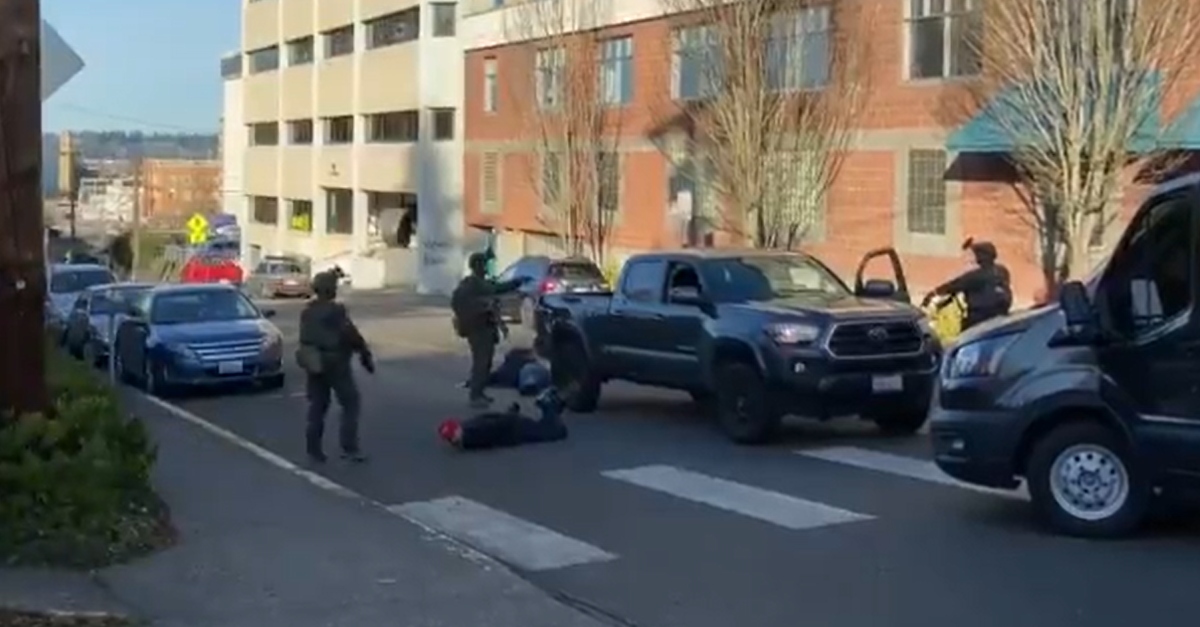 President Donald Trump‘s fight for re-election may be functionally dead in the courts, but if any thing, that is fueling on-the-street confrontation between his supporters and opponents. Police in Olympia, Washington said Saturday that they declared a local demonstration a riot after confrontations involving left- and right-wingers.

Demonstration is now on Columbia at 9th. Law Enforcement has now declared this a riot. Officers are giving dispersal orders. Please avoid the area.

Chris Loftis, Communications Director for the Washington State Patrol, told Law&Crime in a phone interview that a 25-year-old was arrested for first-degree assault in the shooting. He declined to identify the individual, saying the incident was still under investigation.

In his account, the victim refused assistance from law enforcement, and was taken to a hospital by a private party. Loftis said that to his knowledge, the person had yet to speak to police.

Local reporters said they captured the aftermath of the incident on footage.

Shots fired by one proud boy, counterprotestor hit and on the ground now. #OlympiaProtest pic.twitter.com/VYDvymPXz8

Claims of voter fraud by Trump, his attorneys, and legal supporters have found little traction in court, if they bothered to even suggest fraud when facing a judge. All told, allegations of wide-spread voter fraud were completely baseless. That has not stopped certain Trump supporters, such as those who suggest secession, or in the case of a man who spoke at the state capitol on Saturday, invite violent conflict.

“Makes me feel good seeing all these patriots here ready to fight for our nation,” says a speaker surrounded by Trump supporters and others who are dressed in riot gear. “Hopefully it doesn’t come to it…well I don’t know about that, hopefully it does come to it,” he adds. pic.twitter.com/iKnx7kVOVW

Police did not single out one political persuasion or the other when discussing yesterday’s incidents.

In the interview, Loftis described the events as two very large, heavily armed groups engaged in a series of skirmishes and some outright confrontations, which lasted right into the twilight hours. Four officers were injured. He referred our question on the officers’ condition to the Olympia Police Department; police did not immediately respond to a Law&Crime request for comment.

There were an estimated 200 to 250 people involved, Loftis said. “Easily” 100 of those were armed, in his account.

Of all those people involved, 100-150 were said to be left-wingers, and 50-75 were right-wingers. Loftis pointed out that Washington is an open-carry state, so it was not unusual to see armed people at protests, but he said Saturday’s events were different.

“From the very moment people started arriving, it was obvious this was not a gathering to air grievances or to speak freely,” he said. “This was two different groups gathering in a provocative manner.” They were there to “confront,” he said.

Some Trump supporters, Proud Boys and counter protestors faced off in a street brawl in front of the Capitol. Paintballs, smoke bombs and what appeared to be an improvised explosive were hurled by Trump supporters and Proud Boys into the crowd. #OlympiaProtests pic.twitter.com/lssBWppU1d

He said people there were armed with weapons including long guns, pistols, swords, sticks, and fireworks.

This incident occurred at the Capitol Campus during the protest activities today.

“We are asking everyone on both sides to think through their actions,” Loftis said, adding police were not asking people to come together and sing Kumbaya, but that they leave their weapons at home.

[Screengrab of the arrest via @NDpendentPDX]