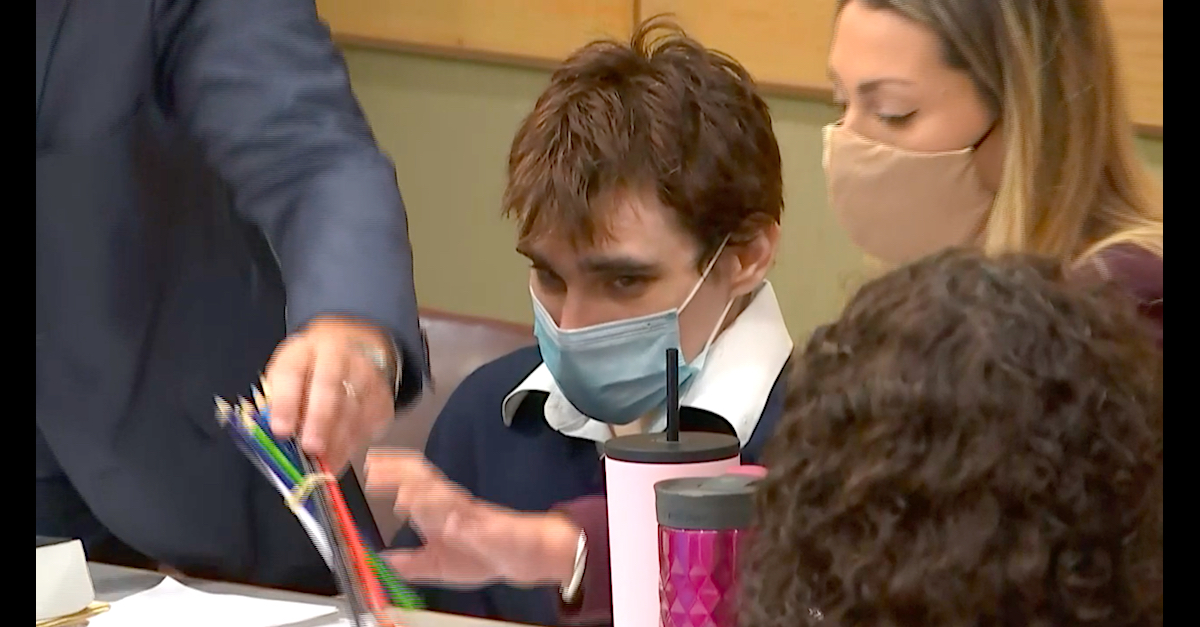 A Florida judge on Wednesday scolded defense attorneys for allowing accused Parkland school shooter Nikolas Cruz the opportunity to use colored pencils during jury selection in a trial related to a separate jail brawl. Cruz is accused of attacking a guard while he was behind bars in November 2018. That case is proceeding apart from a prosecution involving the murders of seventeen others at the Marjory Stoneman Douglas High School on Valentine’s Day 2018.

A prosecutor told Judge Elizabeth Scherer that she “just observed that coloring pencils and a page from what appears to be a coloring book” at the defense table. The prosecutor alleged that the material “was just brought in for the defendant.”

“We’re objecting to that, your honor,” the prosecutor continued. “We believe that that is something they are doing so the jury perceives that, you know, he’s a child and he has a, you know, some kind of — um — his mentality is some kind of challenged. We think that’s inappropriate, and we object to a coloring book page and coloring pencils being given — just provided to the defendant for him to use.”

Prosecutors said Cruz was writing down the names of jurors and was “very oriented” to the proceedings Tuesday — but that allegedly changed Wednesday.

The judge asked one of Cruz’s defense attorneys if he brought the materials into the courtroom. He answered that he had not.

“Somebody did that?” the judge asked.

Someone off camera — presumably a prosecutor — appeared to say that Cruz had been provided with a “page” from a coloring book. 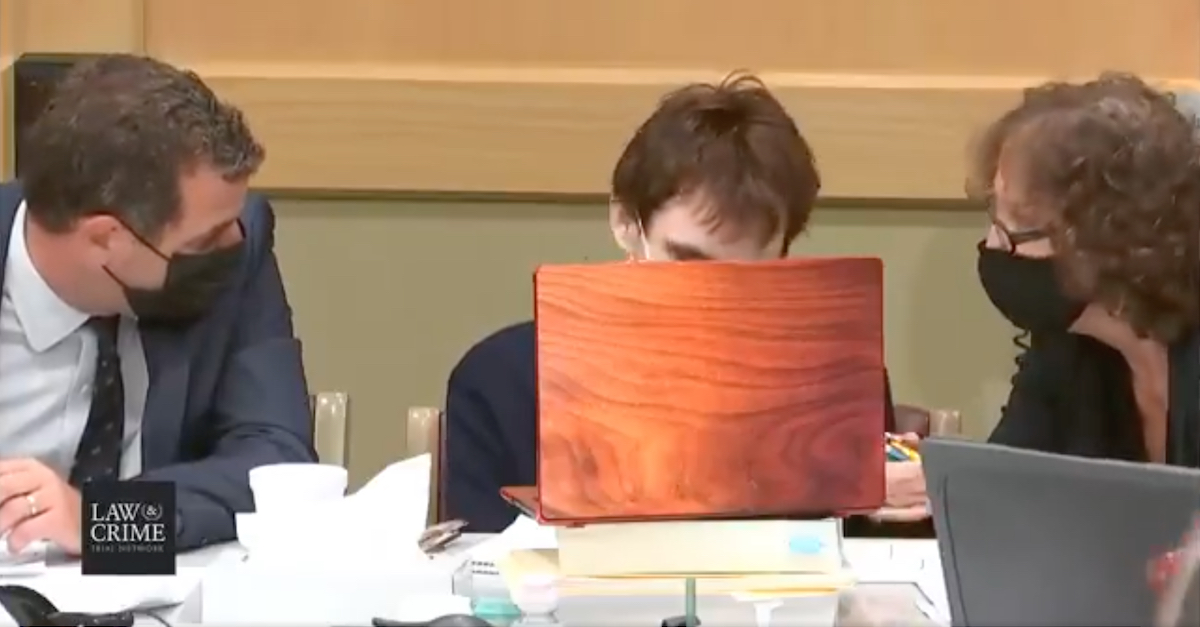 Earlier in the hearing, a woman wearing a black face mask (R) passed a bundle of colored pencils toward Nikolas Cruz (C).

“What is the purpose of it?” the judge asked. “Why does he need the book and crayons?”

Herman asked for a “brief moment to confer” with his co-counsel about the purpose of what the judge erroneously called the “crayons” and the “book.”

The judge granted the pause.

“Why does he need colored pencils and a drawing paper?” the judge asked after the attorneys conferred.

“Judge, he’s clearly upset,” the defense attorney said. “He’s visibly upset right now. I’m trying to keep him calm during this trial, and the defense team is not doing this for any nefarious reasons. Trying to keep my client calm. He just asked for two minutes to himself. I will address that with the court in a moment . . . there’s nothing that he’s doing. His hands are crossed. He’s not drawing. He’s not writing.”

That comment led to a prolonged, stunned look from the judge. 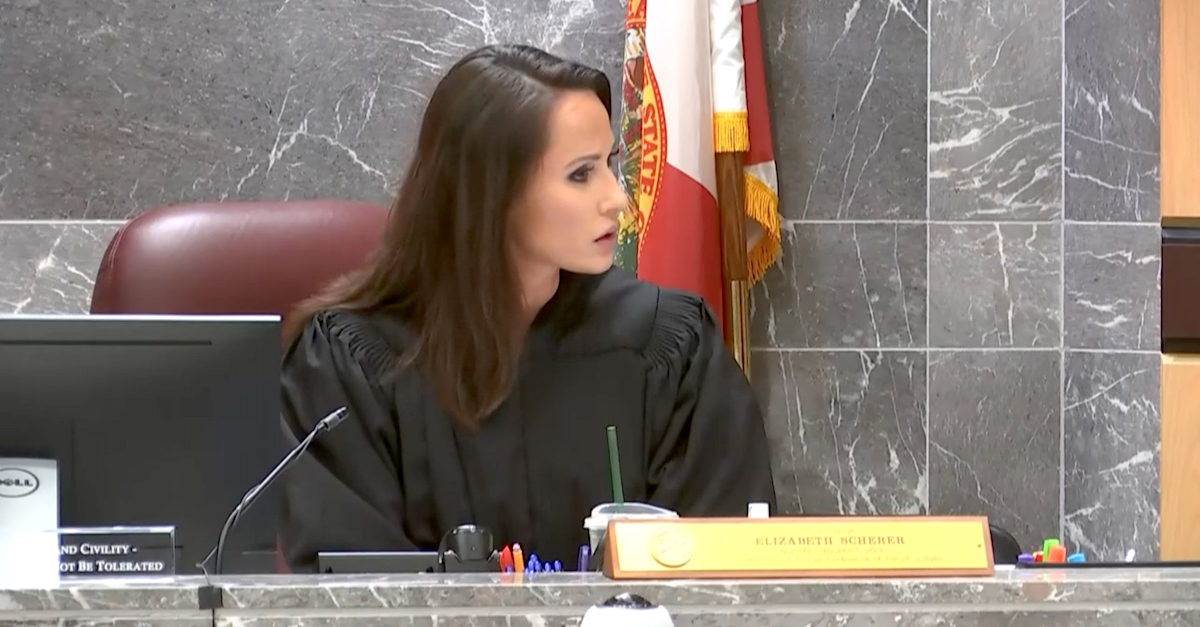 “Okay, so — as long as he’s not coloring with crayons as if he’s a child, that’s fine,” the judge said. “But that’s not appropriate,” she said while tacitly suggesting something else might have been occurring.

The judge continued to refer to a “picture book” even after the defense said there was “no coloring book” involved.

Another defense attorney tried to jump in at this point. The judge shot her down.

“You haven’t answered my question,” the judge said while asking a question the attorney already, indeed, had answered. “Are there — are there crayons or a coloring . . . ”

The judge then stopped that train of thought and went elsewhere.

One of the defense attorneys picked up a bundle of colored pencils and handed it to another attorney. The pointed instruments were secured with what appeared to be a rubber band.

“Okay, the jail’s telling me for security he needs to use the pen that’s issued by the jail,” the judge said.

“There’s no Crayola box here,” the defense quipped back after the judge’s multiple references to crayons. Rather, the defense said there were, indeed, colored pencils on the table.

The judge said it was okay for the defense to use colored pencils to make elaborate notes regarding the various jurors but that Cruz needed to use whatever pen was provided to him.

Or, rather, would be provided to him.

“We will be issuing him a pen,” a jail representative said.

In other words, he didn’t have one provided before jury selection began.

It was unclear from the context of the discussion precisely who passed the pencils to Cruz.  It is also unclear whether he was actually caught doodling or whether he was simply provided the opportunity to do so.

The judge engaged the parties from a bench visibly stocked with pens, pencils, and highlighters of various hues — red, yellow, blue, purple, aqua, and green. But she wasn’t the one on trial.

Editor’s note:  this piece has been updated to clarify that it is unclear whether Cruz actually used the colored pencils or whether he was merely provided the opportunity to use them.