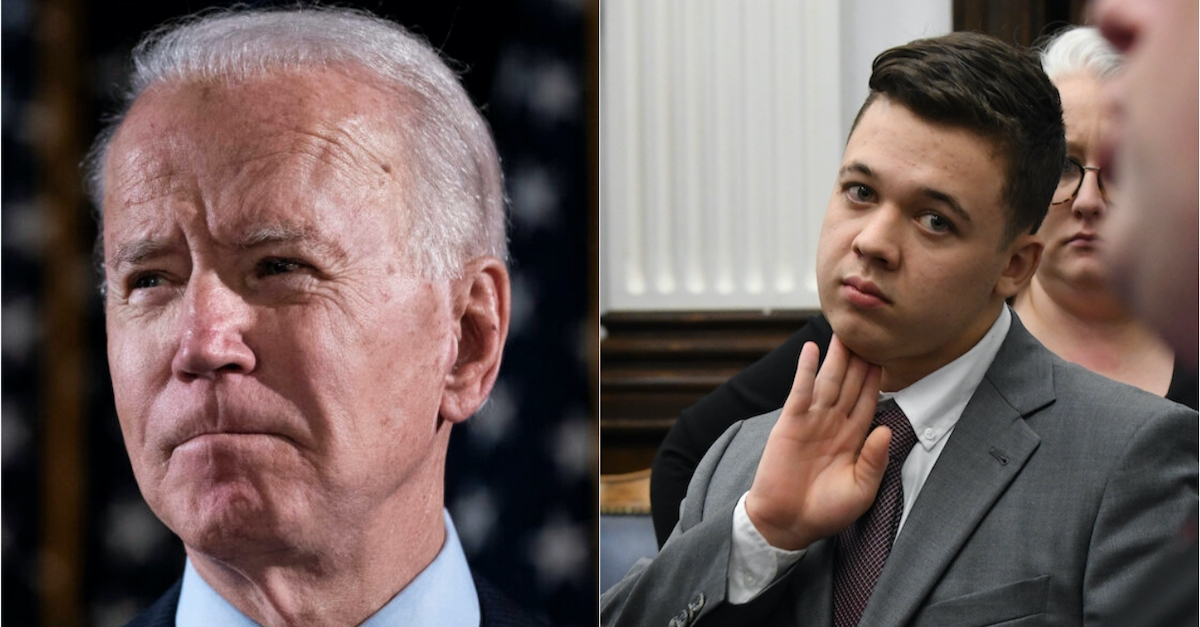 The day that a jury acquitted Kyle Rittenhouse of all charges, President Joe Biden urged those disappointed with the verdict to express views “peacefully.”

After a Wisconsin jury acquitted Kyle Rittenhouse of all charges in his homicide case, President Joe Biden proclaimed himself among those “angry and concerned” by the verdict, but he urged the public to express any criticism “peacefully.”

“While the verdict in Kenosha will leave many Americans feeling angry and concerned, myself included, we must acknowledge that the jury has spoken,” the president said in a statement. “I ran on a promise to bring Americans together, because I believe that what unites us is far greater than what divides us. I know that we’re not going to heal our country’s wounds overnight, but I remain steadfast in my commitment to do everything in my power to ensure that every American is treated equally, with fairness and dignity, under the law.”

Law&Crime’s founder Dan Abrams pointed out that many close observers of the case anticipated an acquittal, noting the prosecution’s tough burden under Wisconsin self-defense law and the murky facts of the case.

The President says he too is “angry and concerned” about the Rittenhouse verdict? But that the “jury has spoken.” Why direct any anger at the jury over a verdict that anyone who watched the case expected based on the law and evidence?

Former federal prosecutor Jennifer Rodgers, a CNN legal analyst who spent more than a decade in the Southern District of New York, agreed.

“I think Biden shouldn’t have inserted himself into the case,” Rodgers told Law&Crime. “He could have just said the jury has spoken and let’s all be peaceful. Saying he’s disappointed suggests he thinks the verdict was wrong, and I’m quite certain he doesn’t know enough about the case to say that. The evidence was such that virtually every legal expert I saw thought there would be an acquittal.”

Rittenhouse, 18, shot three people, killing two, amid spiraling protests, civil unrest and destruction in the aftermath of the 2020 police shooting of Jacob Blake in Kenosha, Wisconsin. Prosecutors made a point to note that the then-17-year-old was the only person to kill anyone that day.

A jury in that city, however, cleared him of the resulting homicide, attempted homicide and reckless endangerment charges stemming from those actions. Rittenhouse’s defense maintained all along that he acted in self-defense.

The first man Rittenhouse killed, 36-year-old Joseph Rosenbaum, had chased him before the shooting, and Rittenhouse claimed Rosenbaum lunged for his gun. A defense expert noted that the second man, 26-year-old Anthony Huber, was seen on video attacking Rittenhouse with a skateboard. The third man, Gaige Grosskreutz, 27, conceded on the stand that he omitted telling police that he himself was armed with a Glock.

Authorities in Kenosha have been bracing for protests, as has Biden, according to the president.

“I urge everyone to express their views peacefully, consistent with the rule of law,” Biden said. “Violence and destruction of property have no place in our democracy. The White House and Federal authorities have been in contact with Governor Evers’s office to prepare for any outcome in this case, and I have spoken with the Governor this afternoon and offered support and any assistance needed to ensure public safety.”

Mark McCloskey and Patricia McCloskey, the St. Louis lawyers who pleaded guilty to misdemeanors after pointing their guns at protesters outside their mansion, told the Law&Crime Network that the Rittenhouse acquittals marked “a great day for America.”

New York Attorney General Letitia James (D), who has an active lawsuit seeking to shut down the National Rifle Association (which she previously called a “terrorist organization“), came out with a far different takeaway—that the criminal justice system itself needs to be “uprooted.”

“This is a dark day for our justice system,” she wrote on Twitter. “As a lawyer, I respect jury verdicts. But this is yet another reminder that our system needs to be uprooted and reformed.”

James is now running for the Empire State’s governor, after sparking the resignation of Andrew Cuomo (D) through her sexual misconduct investigation.

“Just too many things wrong with the Rittenhouse case: from the fact that he had an AR-15, to victims not being called victims, to bad law and worse jury instructions, to an unjust outcome,” Goldman said.

Rittenhouse’s illegal weapons possessions charge was dismissed before it got to the jury because, under Wisconsin law, the weapon’s barrel barrel was of lawful length, Judge Bruce Schroeder ruled. Prosecutors conceded that the rifle did not fit the definition of “short-barreled rifle” under Wisconsin law. The judge also dismissed a curfew violation charge.

Though many criticized Schroeder’s pretrial ruling that prosecutors could not call the men the teen killed “victims,” many defense attorneys and criminal justice reform advocates applauded the move for protecting the rights of the accused. Other decisions by Schroeder—like prompting the jury clap for a defense witness, who was the only person in the courthouse on Veterans Day to have served in the armed forces—led critics to accuse him of bias toward Rittenhouse.

Others noted that prosecutors had a high burden in the case, no matter what the judge ruled: Wisconsin self-defense law puts the burden on prosecutors to disprove a self-defense claim. Many other states have similar laws.

Update: Nov. 19 at 9:29 p.m. Eastern Time: This story has been updated to include comment by former federal prosecutor Jennifer Rodgers.