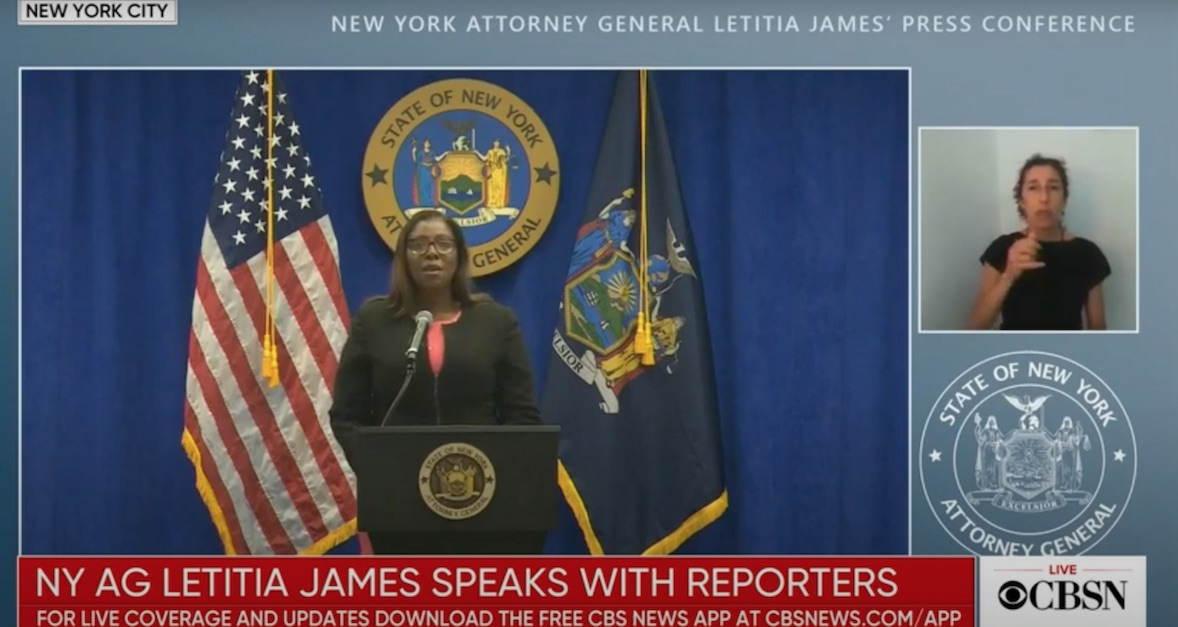 Letitia James, a week before she was elected New York Attorney General in the fall of 2018, said in an interview with Ebony that the National Rifle Association was a “terrorist organization.” On Thursday, James held a press conference that her office touted as “major” and “national.” The AG, a Democrat, told the public that she was seeking the dissolution of the NRA in a civil enforcement action against the nonprofit organization and its decades-long leader Wayne LaPierre.

James was asked by reporters if there were other examples of her office seeking to dissolve an organization. Another person from her office took the podium and pointed to two other instances, one of them the shuttering of the Trump Foundation.

“We came to the conclusion that we needed to step in and dissolve this organization, just as we did the Trump Foundation,” James said, when asked why she was pursuing an extreme and permanent course of action.

James maintained that the massive, 18-cause-of-action complaint—filled with allegations of NRA fraud, self-dealing and exorbitant spending on lavish private activities for executives—is not political and speaks for itself.

But critics say that James was clearly targeting the NRA for political reasons and had telegraphed that she might do that if elected. They pointed to the aforementioned Ebony interview James offered in Oct. 2018. For critics, the James announcement was about the Trump campaign, the election, and how James would combat Trump by persecuting top donors in the NRA.

Q: What is the most important issue you’ve have heard from prospective voters?

A: President Donald Trump and the threat to our democracy and our values. The fact that his policies have reversed all the progress that we made under President Barack Obama and others. There’s an issue of public corruption in New York state; I will seek to restore confidence and integrity in public service. The foreclosure crisis is not behind us, students debt is a major issue, health care is a challenge since they repealed the individual mandate, people are having a difficult time with premiums that have increased and are often times deciding to go without medicine because of the costs, resulting in premature death and gun violence. The NRA holds [itself] out as a charitable organization, but in fact, [it] really [is] a terrorist organization. Women’s rights . . . in New York, we have not codified Roe v. Wade, and last but not least, equal pay for equal work. We can address the feminization of poverty in the state.

The opening lines of the profile established that this was an interview about James’s campaign, the election, and how James would combat President Trump: “Letitia ‘Tish’ James is looking to make history by becoming the first Black woman to hold statewide elected office in New York state. James recently spoke with EBONY about her historic run and how she plans to take on the president if she wins and how she will help Black and Brown voters.”

President Donald Trump, for his part, responded to the news by recommending that the NRA move to Texas.

The NRA donated more than $30 million to help elect Trump in 2016. The organization endorsed Trump in 2016 and 2020 for his support of the Second Amendment. Earlier on Thursday, before the James announcement, the NRA spoke with the Free Beacon about its plans to spend tens of million dollars on the 2020 election.

It is notable that the NRA’s lawyers, who have some work to do, are reportedly saying James’s lawsuit was evidence that the AG has a vendetta against the gun rights advocacy group.

SO, I just heard back from the NRA's attorneys.

They've filed a COUNTER lawsuit against New York state, saying the NY AG's office basically has a vendetta against them and is violating their First Amendment rights.

They want a judge to declare that they're legally operating.