Gaige Grosskreutz Testifies About What He Was Thinking Just Before Kyle Rittenhouse Shot Him, Admits He Didn’t Tell Police the Whole Story 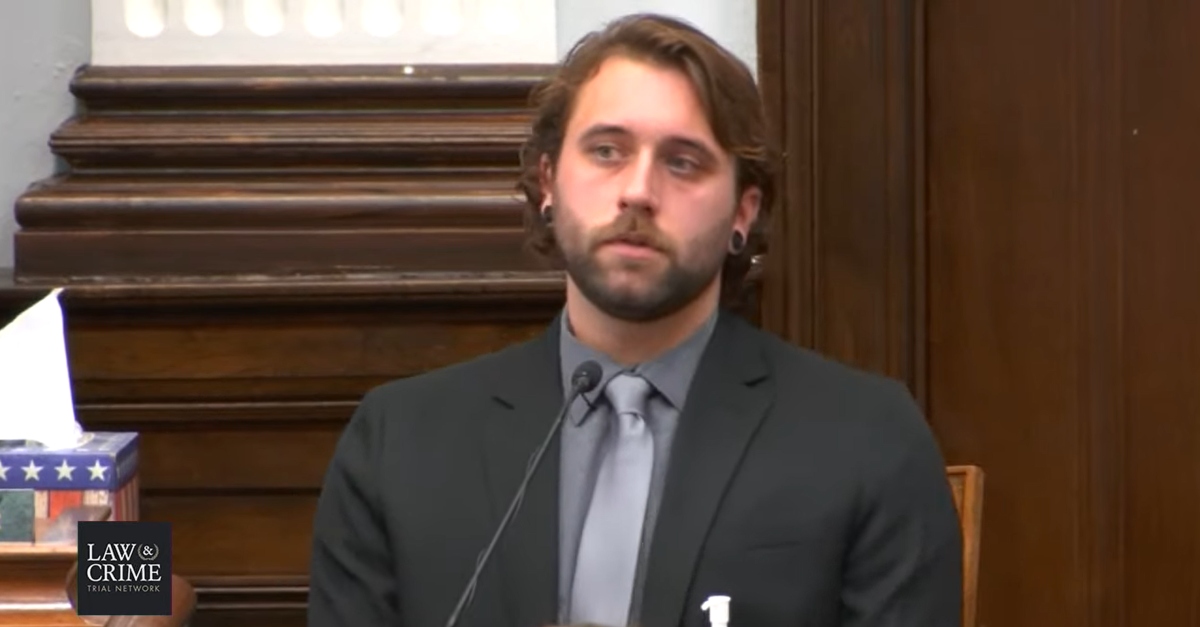 A Wisconsin man who survived a gunshot wound to his bicep on Aug. 25, 2020 took the stand on Monday and testified about what he was thinking as he approached Kyle Rittenhouse on that fateful night. During direct examination, Gaige Grosskreutz, 27, said he was just a paramedic trying to help people at the scene and testified that he only pulled his pistol when he believed that the defendant, then 17 and now 18, was an active shooter. During cross-examination, however, a Rittenhouse defense attorney worked to paint Grosskreutz as a liar. The lawyer suggested Grosskreutz lied to authorities by omission: he failed to mention to investigators that he was armed with a Glock when he encountered Rittenhouse.

Rittenhouse is on trial for the alleged intentional homicides of Joseph Rosenbaum, 36, and Anthony Huber, 26, as well as for trying to kill Grosskreutz. Rittenhouse’s attorneys maintain he acted in self-defense.

Rittenhouse was in Kenosha, Wisconsin amid raucous protests over police shooting local man Jacob Blake. Armed with an AR-15, Rittenhouse was there among other self-described protectors of public property. He in particular held himself out as a medic. Rittenhouse was seen at a Car Source before the shooting. Sahil Khindri, a manager of that business and the son of the owner, testified that he never spoke with anyone about putting together a protection detail to protect their family’s Kenosha properties.

The defense said that an aggressive and agitated Joseph Rosenbaum was the one who instigated the fatal confrontation. The defense said Rittenhouse killed Rosenbaum in self defense, and that others around the scene who didn’t see what happened — including Huber and Grosskreutz — attacked Rittenhouse “in the street like an animal.”

“The evidence will show that [Rosenbaum] thought — probably — that he could get that gun from Kyle Rittenhouse,” defense lawyer Mark Richards said. “He was wrong. Kyle Rittenhouse protected himself, protected his firearm so it couldn’t be taken — used against him or other people. And the other individuals who didn’t see that shooting attacked him in the street like an animal. Ladies and gentlemen, that’s what the evidence will show.”

In any case, Grosskreutz’s initial belief about what Rittenhouse said appeared to sync up with what another armed man, Ryan Balch, said about police planning to push protesters toward militiamen, with the understanding that the militiamen would “deal with them.”

More people began to chase after Rittenhouse. The defense construed this as a “mob.”

Grosskreutz said he pulled out his gun not intending to use it, but also being ready if he had to use it. Rittenhouse fired two shots at another man, and then shot Huber in the chest, the prosecution said.

Grosskreutz said he was holding his gun in his right hand and his phone in his left hand. In his mind, he believed he was going to die, and that Rittenhouse “re-racked” his gun. He testified to believing that Rittenhouse had tried to fire the weapon but that it did not go off as planned. Rittenhouse did not accept Grosskreutz’s “surrender,” the witness said. Grosskreutz denied ever trying to kill the defendant. He said he did not shoot Rittenhouse first because that he is not the kind of person he is.

The Rittenhouse bullet took out a large majority of Grosskreutz’s right bicep, the witness said. He has lost strength in that arm, and lost feeling along the edge of his forearm down to his thumb, Grosskreutz testified.

#KyleRittenhouse – Under cross-exam the jury was shown a tweet by Gaige Grosskreutz on Friday (during this trial). Grosskreutz reponds to someone else’s tweet and posts: “Make sure you look and listen for the defendant’s fierarm malfunctioning (winky face)” pic.twitter.com/fRmwNytxqo

#KyleRittenhouse – On redirect, Grosskreutz demonstrates how his body was positioned in the moment of the screenshot shown. He describes he had his left side toward Rittenhouse with the gun in his right hand in the air away from Rittenhouse. pic.twitter.com/oPkfVRUnNJ

#KyleRittenhouse – Binger asks Grosskreutz if this is the way he holds his gun if he’s going to shoot it. He said, no. @LawCrimeNetwork pic.twitter.com/QQC85P5abD

Grosskreutz denied chasing the defendant, but acknowledged he never told authorities that he had a gun during his interaction with Rittenhouse. Grosskreutz did not dispute that there was a round in the chamber.

The defense also brought up Grosskreutz’s federal lawsuit against the city and county of Kenosha. The complaint never mentioned Grosskreutz having a gun.

Grosskreutz agreed that he never told police that he believed Rittenhouse professed to be working with cops.

“That is correct,” Grosskreutz said.

The defense also mentioned that another man — referred to in court as “Jump Kick Man” — was caught on video leaping at Rittenhouse. Grosskreutz said he never saw the individual strike Rittenhouse in the face, but did see him go over him. Describing a picture of the scene, Grosskreutz acknowledged that Huber struck Rittenhouse with a skateboard.

When speaking with law enforcement, Grosskreutz omitted that he ran up to Rittenhouse with his Glock in hand. He acknowledged that’s what happened in court.

In trying to explain these omissions, Grosskreutz said that the discrepancies were not purposeful. He said that he had gone through one of the most traumatic events in his life, had been sedated, and was in pain. When he declined to answer after the shooting what he did for work, Grosskreutz said he was worried about safety. But the defense suggested he was methodically choosing what information he told investigators and what he withheld. The defense suggested that Grosskreutz selectively left out the detail about being armed.

Under defense questioning, Grosskreutz further acknowledged that his permit to carry a concealed weapon had expired and was not valid on the night of the shooting.