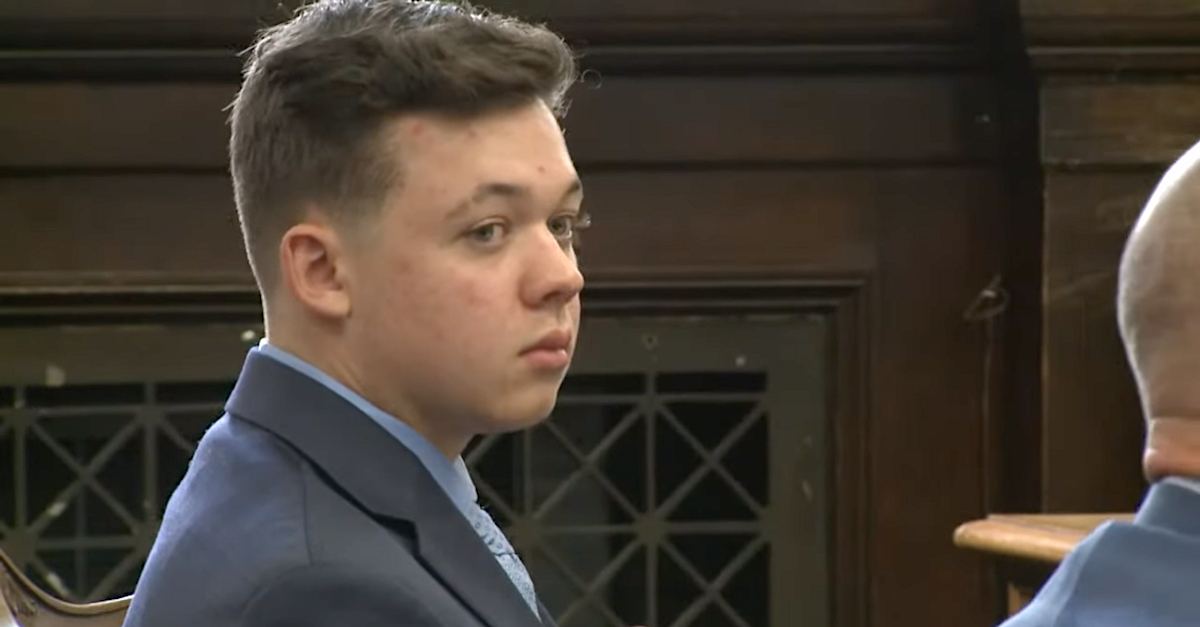 Kyle Rittenhouse appears in court for a pre-trial hearing on Oct. 25, 2021. (Image via screengrab from WITI-TV/YouTube.)

Keeping with a longstanding practice employed across “thousands” of cases tried before him, a Wisconsin judge has indicated that attorneys will not be allowed to refer to any of the three individuals shot by Kyle Rittenhouse as “victims.” However, Kenosha County Circuit Court Judge Bruce Schroeder ruled on Monday that those individuals could be referred to as having been involved with “arson, rioting, or looting” if the facts proved those latter accusations true.

“This is a long-held opinion of mine, which very few judges, I guess, share with me,” said the judge with reference to his disdain for the particular moniker. “The word ‘victim’ is a loaded, loaded word, and I think ‘alleged victim’ is a cousin to it.”

The judge said referring to the “decedent” or something similar was more “appropriate” because it neither implied the defendant’s guilt nor implied the innocence of those killed.

Assistant Kenosha County District Attorney Thomas Binger agreed with the judge that he has personally been admonished “in the thousands” of times for using the term “victim” in Schroeder’s court, but Binger argued unsuccessfully that the defense should be similarly prevented from using inflammatory terms to refer to the individuals killed or injured by Rittenhouse.

“I don’t think I’m inclined at all toward prior restraint,” Schroeder said. “I would encourage restraint in opening statement, but let the evidence show what the evidence shows. And if the evidence shows that any (or more than one) of these people were engaged in arson, rioting, or looting, then I’m not going to tell the defense they can’t call them that.”

The judge said he was accustomed to attorneys using various adjectives to “beatify” and “demonize” various individuals. He recalled one case where a prosecutor refused to a defendant as a “worthless excuse for a human being,” which he said was clearly “out of line.” But the judge said he had no issue with attorneys using words “a person has earned by his behavior.”

Binger said the terms “rioters, looters, and arsonists are as loaded if not more loaded than the term victim.”

“It’s a double standard,” Binger said, but the judge disagreed.

“Their behavior that night has nothing to do with this case unless it was witnessed by the defendant,” Binger continued. “This is going to be a case about self defense, so we’re going to talk about the defendant’s state of mind . . . his state of mind is the most important thing in this case. If there are things he witnessed with his own eyes by Mr. Huber, Mr. Rosenbaum, and Mr. Grosskreutz, I have no problem with that because it does go to his state of mind.”

Prosecutors conceded at the Monday hearing that Rosenbaum had been recorded saying “inflammatory things to other people” before he was killed, but Binger said Rittenhouse appears to have known nothing about those statements. Therefore, Binger said those statements should not come into evidence during the trial. Generally, evidence to suggest Rosenbaum acted in conformity with having a bad character would be inadmissible, Binger argued.

Judge Schroeder suggested Binger could say “Kyle Rittenhouse is a cold blooded killer” during closing arguments, and Binger agreed that he should be able to do so if he pleased.

A significant portion of the two-and-a-half hour hearing was spent hashing out other evidentiary issues.

Among them were evidentiary battles over whether an officer who interacted with Rittenhouse regarding an unrelated incident before the deadly shootings would be able to testify at trial. Prosecutors said the officer described her conversations with the defendant as “brief but cordial interactions” but sought a protective order against the officer’s testimony out of fear that it would come across as if the authorities had “approved” Rittenhouse’s actions as a lawful activity. Though prosecutors said Rittenhouse’s group engaged in some minimal conversations with a business owner about protective duties, Rittenhouse was not a professional security guard. Rather, they argued that Rittenhouse was “wandering on his own” and engaged in conduct “well beyond his purview.” The defense said the officer’s observations of Rittenhouse’s behavior were relevant to the question of whether the defendant was “reckless” — and that term carries significant weight under the relevant Wisconsin law by which Rittenhouse will be judged. The judge said he was inclined to allow the defense to question the officer but suggested a preference for ruling on the fly about any particular types of questions as the testimony develops at trial. The defense made clear that it did not wish to question the officer about the underlying incident which led to the contact between Rittenhouse and the officer in the first place.

The parties also battled about whether a use-of-force expert would be allowed to testify about video of the deadly shooting. Prosecutors said the expert proffered by the defense was biased because he issued a report filled with speculation about the intent of various people portrayed in a video of the shootings and of their aftermath. The state also said the proffered reason for the expert’s testimony — to walk the jury through the video — could be accomplished by other means. They said the jury was “well equipped” to assess the matter using a stopwatch or slow-motion video and that no expert was necessary. The defense countered that the jury needed to be keyed in on one section of video that lasted only one second and another that lasted seven seconds.

“It’s our position,” a defense attorney said, that the situation required “self-defense.”

“I’m going to turn myself in to the police — I had to,” Rittenhouse said when asked if he shot someone shortly after pulling the trigger.

Watch the proceeding below; it is queued to the discussion about the word “victim.”

[Image via screengrab from WITI-TV/YouTube.]