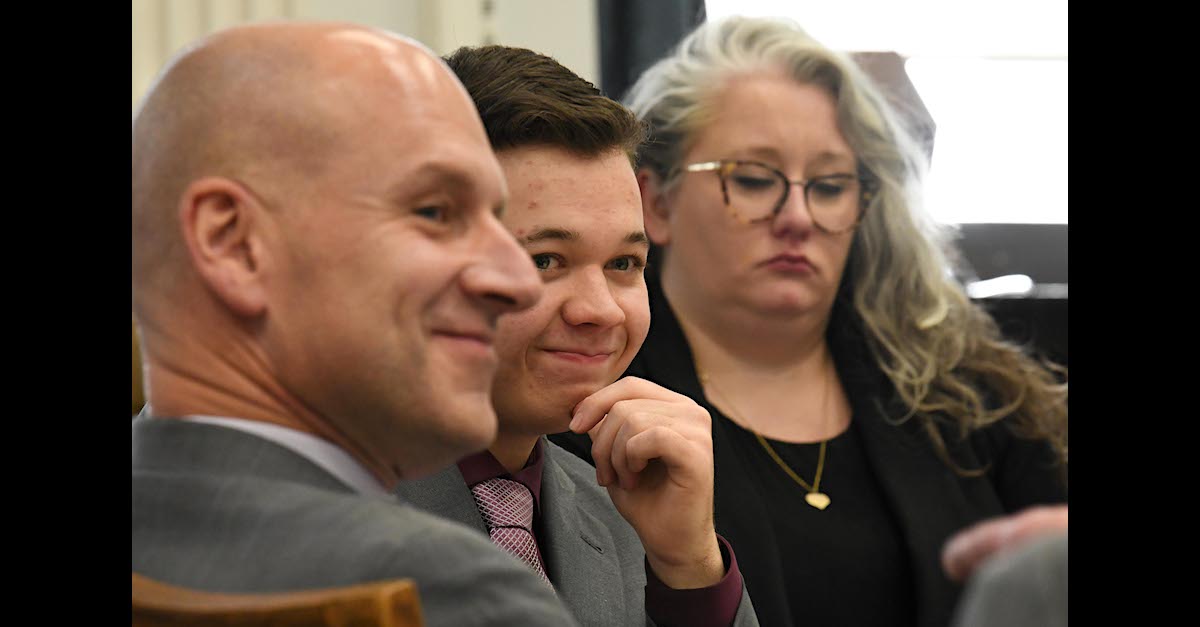 The Wisconsin judge overseeing the intentional homicide trial of Kyle Rittenhouse on Tuesday afternoon dismissed the seventh count against the teen. That charge alleged that Rittenhouse failed to comply with an emergency management order of a state or local government by failing to heed a curfew on Aug. 25, 2020, when he shot three people and killed two of them.

Lead defense attorney Mark Richards moved to dismiss the count after the jury broke for lunch.

“I want to put on the record now that the state intends to rest,” said lead prosecutor Thomas Binger.

Judge Bruce Schroeder used the jury’s lunch break as a natural pause during which to handle motions.  Richards asked Judge Schroeder to confirm that the state had rested its case; the judge interpreted the state’s intention to rest as a de facto termination of the state’s case in chief.  (Some of the audio of the proceeding was muted, so all of the conversation leading up to request by Richards was unclear.)  Spurred by the judge’s request to get the motions out of the way while the jury ate, Richards wasted no time; he seized the moment by lodging a standard request made by defense attorneys after prosecutors rest their cases in chief.

“They have not put in any evidence regarding a lawful order for a curfew violation; we’ll be moving to dismiss that,” Richard said. He also renewed an object as to another count — count six — which alleged Rittenhouse possessed a dangerous weapon while under the age of 18. The court previously refused to acquiesce to the defense’s objections as to count six, but Richards sought to preserve the issue for the record so that it would not be waived. The issue involving count seven, however, required fresh discussion and consideration. 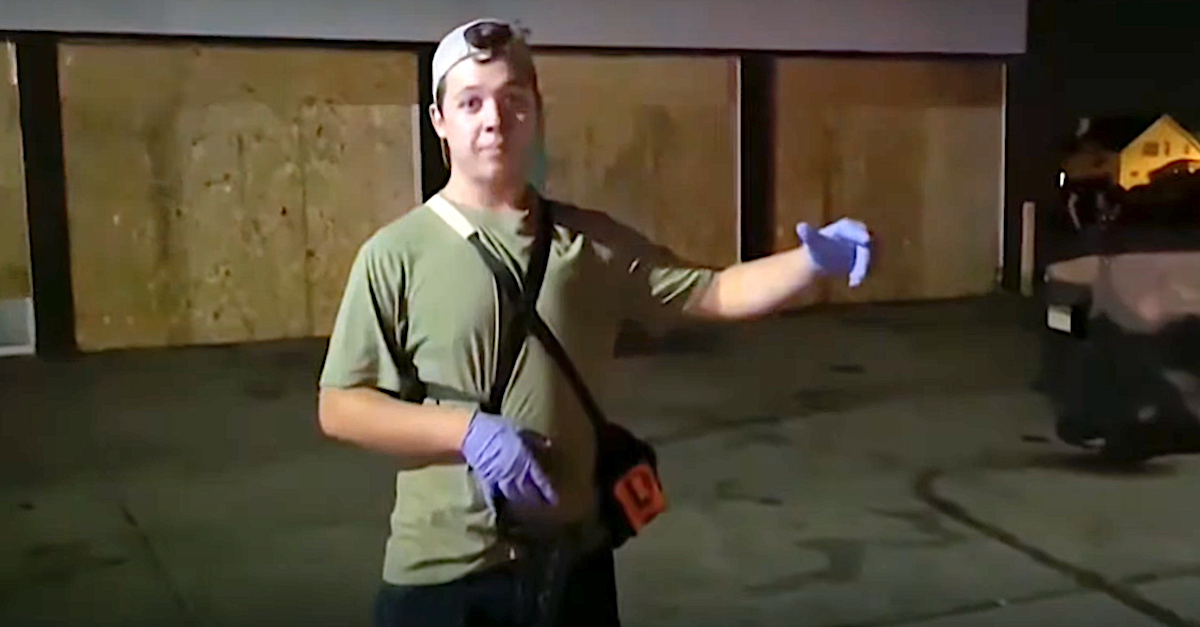 Kyle Rittenhouse speaks to Richie McGinniss of the Daily Caller on Aug. 25, 2020. The recording was entered into evidence on Nov. 4. 2021, in Rittenhouse’s trial. (Image via screengrab from the Law&Crime Network)

The judge asked lead prosecutor Thomas Binger to respond to the defense’s request to have count seven judicially jettisoned from the jury’s purview.

Binger replied that a police officer’s testimony should be acceptable.

“We’ve had testimony from the detective that a curfew was in place,” Binger responded.

“Did he testify as to by whom the order had been issued?” Judge Schroeder asked.

“I don’t know about that one,” Schroeder continued in what seemed like a stream-of-consciousness discussion. “I would expect that there would have to be — just the mere statement that a detective said that there was a curfew in effect doesn’t really satisfy the — the burden of proof. I will permit you to reopen the evidence, however — no, no, no — I don’t want to — this is — this is — .”

The judge appeared to be thinking out loud as he trailed off in thought. The attorneys jumped in with raised voices. One of the prosecutors appeared to say that the state hadn’t closed its case-in-chief just yet. Richards retorted that he explicitly asked if the state had rested; when the judge affirmed they had, he said he jumped in with a motion to dismiss count seven.

“That’s why I bought it up!” Richards exclaimed. 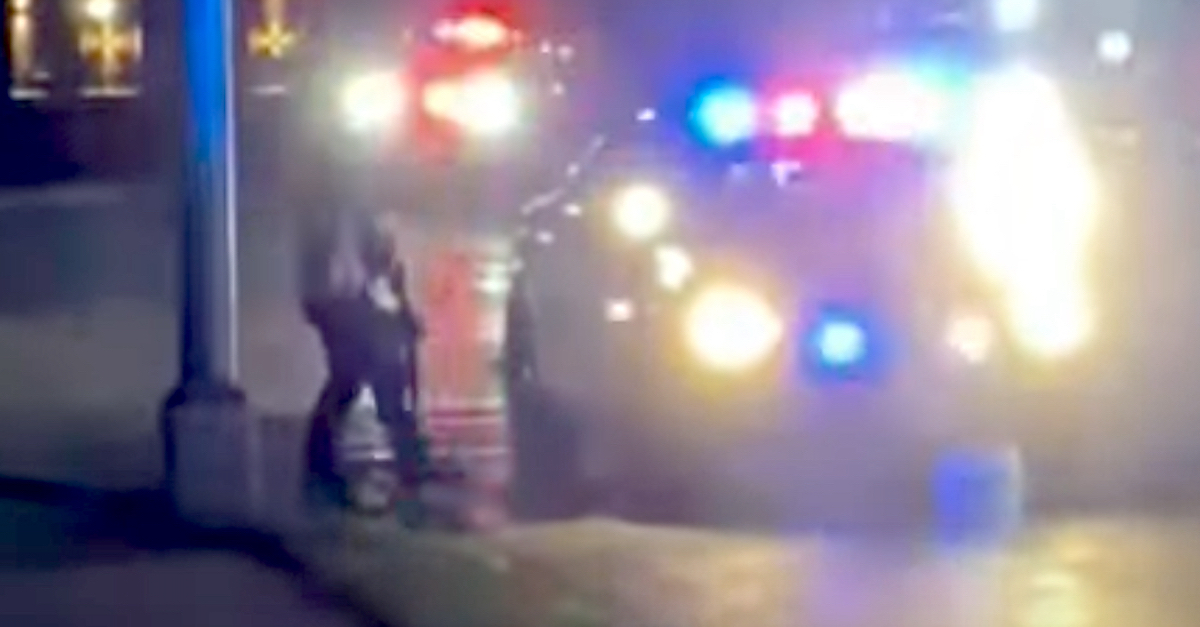 A still frame from an evidence video shows the moment when Kenosha police officers began to pepper spray Kyle Rittenhouse to get him out of the road. They said he touched his rifle several times when he approached their squad car and that they were concerned he was a threat. (Image via the Law&Crime Network.)

Schroeder talked over the bickering attorneys and extolled a few lessons about a judicial training from decades ago.

“We’re here to get to the truth of things, and I don’t want to mess around with — um, with, uh — an error in presentation of that magnitude,” Schroeder said.

The judge then indicated he was “inclined” to grant the request but did not do so immediately. He said he wanted to avoid a “thicket” that another judge from years past had entered by pondering whether to toss a charge.

“I’m not going to dismiss it on the ground that it wasn’t proven,” Schroeder said before lunch. He said the bigger issue as to count seven was slightly different, but the context was slightly unclear. He suggested that he needed to know whether another judge had previously resolved in issue surrounding the directive.

The judge broke for lunch while apparently pondering the request. He returned having apparently changed his mind.

“I think the evidence you offered was a statement by a . . . City of Kenosha police officer that there was a curfew in effect,” Judge Schroeder said. “And that’s the extent of it?”

“It’s not,” Schroeder ruled. “The motion is granted. Count seven is dismissed.”

Whoever intentionally fails to comply with an order issued by an agent of the state or of a local unit of government who is engaged in emergency management activities under this chapter, including training exercises, is subject to a forfeiture of not more than $200.

A specific jury instruction for the statute involved does not appear to be a part of the standard Wisconsin criminal jury instructions that judges read to panels which decide cases.

The loss of count seven is just one in a series of what might be perceived as prosecutorial blunders in the high-profile trial. Last week, prosecutors stopped eliciting testimony from a relative of one of the men Rittenhouse shot. The relative, Susan Hughes, was the great aunt of Anthony Huber. Hughes was prepared to testify that in her opinion Huber was generally a peaceful individual. The defense said it was prepared to cross-examine Hughes about Huber’s criminal and perhaps even psychiatric record to dig into the thoroughness of her opinions about her deceased relative’s character. The defense’s tactical move led prosecutors to withdraw one question already asked and to prematurely terminate their attempt to characterize Huber as a hero who tried to prevent Rittenhouse from committing harm. Legally speaking, prosecutors said they sought the testimony from Hughes to counteract claims by Rittenhouse’s lawyers that Huber was an initial aggressor in the attack.

Additionally, Gaige Grosskreutz, the man who survived being shot, testified that he failed to tell the police key portions of his story the night he was shot.  For instance, he admitted on the witness stand that he never told the police he had a gun.  He also admitted he was carrying a concealed weapon when he didn’t have a valid permit to do so.