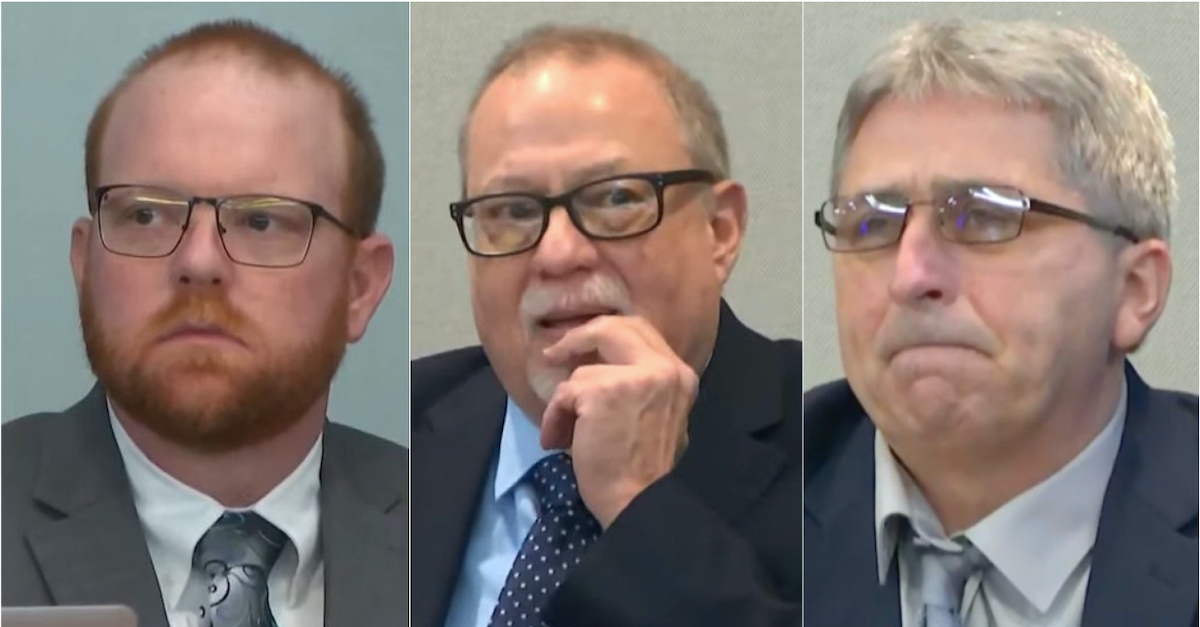 A Georgia jury convicted the three men charged with murdering Ahmaud Arbery of nearly all of the charges leveled against the trio on Wednesday.

Three white men—gunman Travis McMichael, his father Greg McMichael and William “Roddie” Bryan—faced a raft of charges for pursuing Arbery in the confrontation that led to the 25-year-old Black man’s death, including malice murder, four counts of felony murder, two counts of aggravated assault, one count of false imprisonment, and one count of engaging in a criminal attempt to commit a felony.

The top counts for each of the men carry a mandatory minimum of life imprisonment. Judge Timothy Walmsley will decide whether or not they will be parole-eligible after 30 years.

The Arbery family’s attorney Ben Crump, who did not immediately respond to a request for comment, released a statement characterizing the verdict as “progress”—but not full justice.

“Today certainly indicates progress, but we are nowhere close to the finish line,” Crump tweeted. “America, you raised your voices for Ahmaud. Now is not the time to let them quiet. Keep marching. Keep fighting for what is right. And never stop running for Ahmaud.”

Travis McMichael’s attorney Jason Sheffield told Law&Crime in a phone interview that he understands that the same findings that “devastated” his client’s family has brought “joy and celebration” to the Arbery family.

“I find myself at an emotional crossroads,” Sheffield said. “In one direction, I have my client and his family who are devastated and are disappointed, who now realize that the father and the son will be spending the rest of their life in prison for something that they truly in their hearts and in their minds thought was the right thing to do to protect themselves and their community. At the same time, recognize the joy and the celebration of the Arbery family in arriving at a point that brings them great relief and closure to their tragedy.”

It is undisputed that the Travis McMichael, armed with a shotgun, killed Arbery by firing three shots at him at point blank range on Feb. 23, 2020.

Months would pass without any action from local authorities until a grisly video of the killing surfaced. The image of Arbery’s shooting sparked protests by Black Lives Matter activists and an investigation by Georgia state authorities, leading to the men’s indictment.

Falling in tandem with the equally hot-button trial of Kyle Rittenhouse, their case also became a political lightning rod—described by Arbery’s family, racial justice activists, and even then-candidate Joe Biden as an apparent “lynching.” Others rallied around the accused men, accepted their self-defense claims, and criticized the prosecution as a media-fueled rush to judgment.

Defense attorneys insisted that the trio tried to effectuate a citizen’s arrest of Arbery, whom they claimed to have suspected of a burglary at the construction site of Brunswick, Ga. homeowner Larry English. Arbery was spotted in surveillance footage on English’s property in the Satilla Shores neighborhood, but English testified that it was “common” and “normal” for the site to attract onlookers.

For the prosecution, the case was one about “assumptions and driveway decisions.” Assistant District Attorney Linda Dunikoski told the jury that the men jumped to the wrong conclusions when seeing, in the words of Greg McMichael in a 911 call, a “Black male running down the street” away from English’s property. That jury reviewed the 911 of the elder McMichael making that remark during deliberations.

Greg McMichael also told a Glynn County police officer that Arbery was “trapped like a rat” after he and his co-defendants chased him, the jury heard.

Bryan told another officer that Arbery had been “hauling ass” away from him at the time and said that he was nearly “thrown through the damn windshield trying to chase this joker,” referring to a then-deceased Arbery.

Making an analogy asserting their shared responsibility for Arbery’s death, prosecutor Dunikoski said during closing arguments: “Everybody gets a Superbowl ring.”

Travis McMichael’s lawyers framed the case as one of “duty and responsibility,” playing up his service in the U.S. Coast Guard and asserting that he used the law enforcement training there to protect his community. He continued to echo those themes when he took the stand in his defense, testifying that he shot Arbery when the 25-year-old lunged for his weapon. The jury asked to review the video of McMichael and Arbery’s final confrontation three times.

Bryan had shot the footage.

Under cross-examination on Nov. 18, Travis McMichael conceded that Arbery never yelled at him, threatened him, or brandished any sort of weapon when the pursuit began.

“There Appears to Be Intentional Discrimination”

Throughout the case, Travis McMichael claimed that he chased Arbery based on reasonable suspicion that the 25-year-old had committed a crime, and the prosecutor sought to systematically undermine that. A Glynn County police officer testified that he would have given Arbery a warning for trespassing, a misdemeanor offense that would not have allowed McMichael to execute a citizen’s arrest. The construction site where English’s home was being built was open, unsecured and did not have any “No Trespassing” signs on it.

English installed a phalanx of surveillance footage on his property after he had belongings stolen from his boat on a dock nearby. The parties offered no evidence connecting Arbery to that crime, and English testified that he never authorized McMichael or his co-defendants to confront anybody at the site.

The prosecution of the McMichaels and Bryan followed after wrenching video of the shooting became public in May—reportedly leaked by a lawyer informally consulting for the defense. The footage ignited national controversy, animated the Black Lives Matter movement, and sparked demonstrations outside the courthouse throughout the trial. Civil rights leaders like Al Sharpton and Jesse Jackson visited the courtroom—to the dismay of Bryan’s lawyer Kevin Gough, who openly groused about visits from “Black pastors.”

Gough later apologized for making the remark, but he continued to make sure these same complaints were entered into the record time and again. He even erroneously said last week that he spotted Martin Luther King, Jr. in the courtroom.

Greg McMichael’s attorney Laura Hogue sparked outrage on Monday when she made a remark about Ahmaud Arbery’s “long, dirty toenails” — a comment widely perceived as a dehumanizing and racist dog-whistle.

During closing arguments on Monday, an attorney for Greg McMichael raised eyebrows by making a comment about #AhmaudArbery “in his khaki shorts, with no socks, to cover his long dirty toenails.” @LawCrimeNetwork pic.twitter.com/2ezGRpp2dN

Arbery’s mother Wanda Cooper–Jones was so taken aback she had to leave the courtroom.

“I didn’t expect them to go that low,” Cooper-Jones told CBS after that day in court. “I’ll just say this, regardless of how long and how dirty his toenails were, that’s still my son, and he didn’t deserve to die the way that he died.”

Before trial, Judge Walmsley found “there appears to be intentional discrimination” in the defense’s use of peremptory strikes but he said his hands were tied by precedent to address it. Prosecutors rarely brought up race during the trial itself, other than to quote the defendants.

Race likely will come into focus in other litigation connected to Arbery’s death. Arbery’s mother continues to pursue a federal civil lawsuit, filed on the one-year anniversary of Arbery’s death, accusing Glynn County law enforcement of a cover up of her son’s killing. State prosecutors took over the case to avoid a conflict of interest by local authorities accused of wrongdoing. The lawsuit claimed that Travis McMichael used a racial slur after shooting Arbery to death.

(Images via the Law&Crime Network)