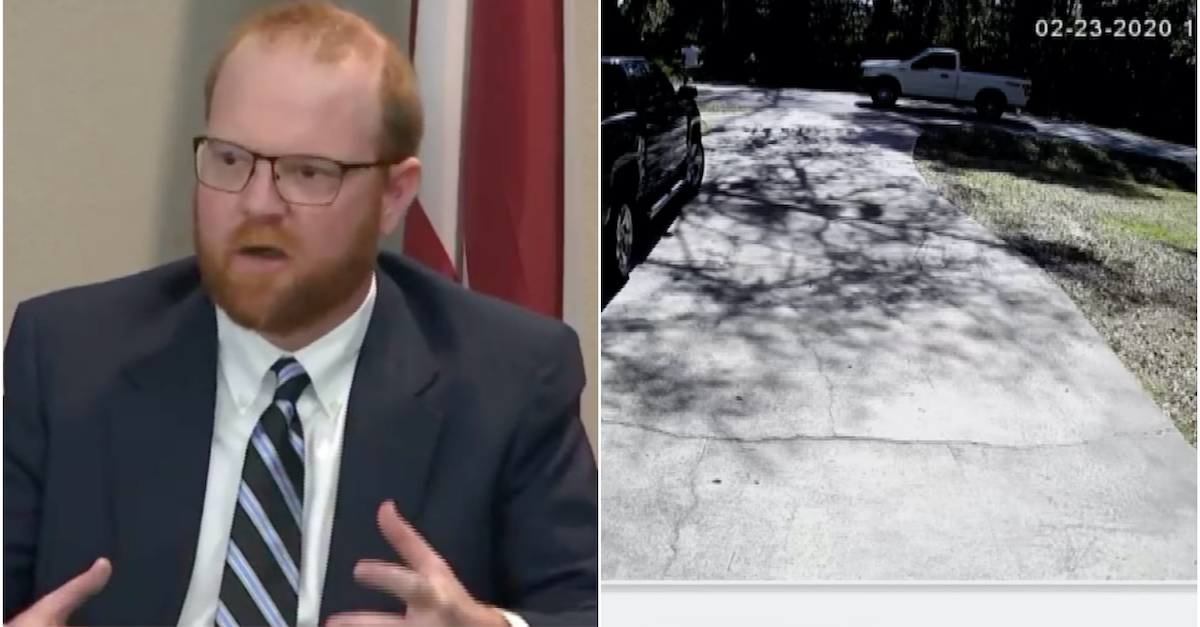 Accused murderer Travis McMichael (left) conceded on the witness stand that Ahmaud Arbery was “just running” when he chased him with his truck.

During blistering cross-examination, the man who fatally shot Ahmaud Arbery conceded on Thursday that the 25-year-old Black man he killed was “just running” when he chased after him with his truck. Travis McMichael, who is facing his second day of questioning in his murder trial, confirmed to the jury Arbery never yelled at him, threatened him, or brandished any sort of weapon.

This was just one of the exchanges during which the prosecutor undermined McMichael’s claim that he acted in self-defense and in accordance with his law enforcement training when he fired three shots at Arbery in point blank range on Feb. 23, 2020.

Travis McMichael, his father Greg McMichael and William “Roddie” Bryan all face murder charges for pursuing Arbery in the confrontation that led to the young man’s death. The younger McMichael, who took the stand in his own defense, pulled the trigger. All three claim to have been trying to protect their community in Brunswick, Ga., specifically a construction site on Satilla Drive owned by local homeowner Larry English. Though Arbery was spotted on the unsecured construction site, English previously testified that it was “common” and “normal” for onlookers to enter and exit the property. English added that he never deputized the McMichaels or Bryan to confront people on property, which did not have a “No Trespassing” sign.

A U.S. Coast Guard veteran, Travis McMichael spent a good portion of his attorney’s questioning on Thursday describing his training and understanding of law enforcement acronyms like SEASII (short for Search, Examinations, Arrest, Seize, Inspect, and Inquire) and LEAP (Listen, Empathize, Ask Questions, Paraphrase). McMichael insisted his goal was to deescalate the situation and arrest Arbery for a suspected burglary until the police could arrive.

Systematically seeking to undermine those assertions, Dunikoski continuously grilled McMichael on a part of his law enforcement training that he glossed over: understanding the Fifth Amendment right to remain silent, enshrined in the U.S. Constitution.

“At this point in time, you could’ve just stopped?” Dunikoski asked.

McMichael agreed, adding later that he wanted to check to ask him what was happening.

In another series of questions, Dunikoski quizzed McMichael on his views about what she called “vigilantism.” McMichael conceded that he posted on social media “Arm up” and remarked about catching “vermin,” in response to criminal suspects. He said he agreed with the statement that when help is needed within seconds, the police are minutes away.

“Honestly, I Do Not Remember”

During his attorney’s direct examination, McMichael painted Arbery as “irrational” and an aggressor. Arbery, in his killer’s telling, attacked a black truck in the middle of the chase and ultimately charged at McMichael before the shooting.

“He grabs the shotgun and I believe that I was struck on that first instance where we made contact,” McMichael claimed on Wednesday afternoon, referring to Arbery.

Scoffing at the assertion, prosecutor Dunikoski asked McMichael McMichael if he “wanted a jury to believe” that Arbery attacked a truck—in fact, the prosecutor suggested, trucks were trying to run him off the road. She also noted that his testimony that Arbery grabbed the gun contradicted what he told the detective at the time.

“Did you remember if he grabbed your shotgun at all?” the detective asked.

“I want to say he did, but honestly, I do not remember,” McMichael initially replied.

McMichael agreed that he never told the police during his statement that he was trying to arrest Arbery or told him the police were coming.

“This is something that you told the jury for the very first time,” Dunikoski said.

Agreeing that was true, McMichael blamed the omissions on the shock of having killed a man.

“This is the most traumatic event that I’ve ever been through in my life,” McMichael said.

When asked if he was afraid of going to jail, however, Travis McMichael denied it. Months would pass after the killing before the arrest of McMichaels, after footage of Arbery’s killing garnered national attention and galvanized the Black Lives Matter movement. Bryan would be arrested days later. Racial justice activists continue to keep a close eye on the case.

When Al Sharpton observed the trial last week, Bryan’s attorney Kevin Gough previously complained: “We don’t want any more Black pastors coming in here,” a remark for which the lawyer apologized. Gough complained again on Thursday that someone went to court wearing a T-shirt in support of Black pastors and that the Rev. Jesse Jackson was in the gallery.

Jackson could be seen sitting next to Ahmaud Arbery’s mother Wanda Cooper-Jones and behind Leigh McMichael, the wife of Greg McMichael and mother of Travis McMichael.