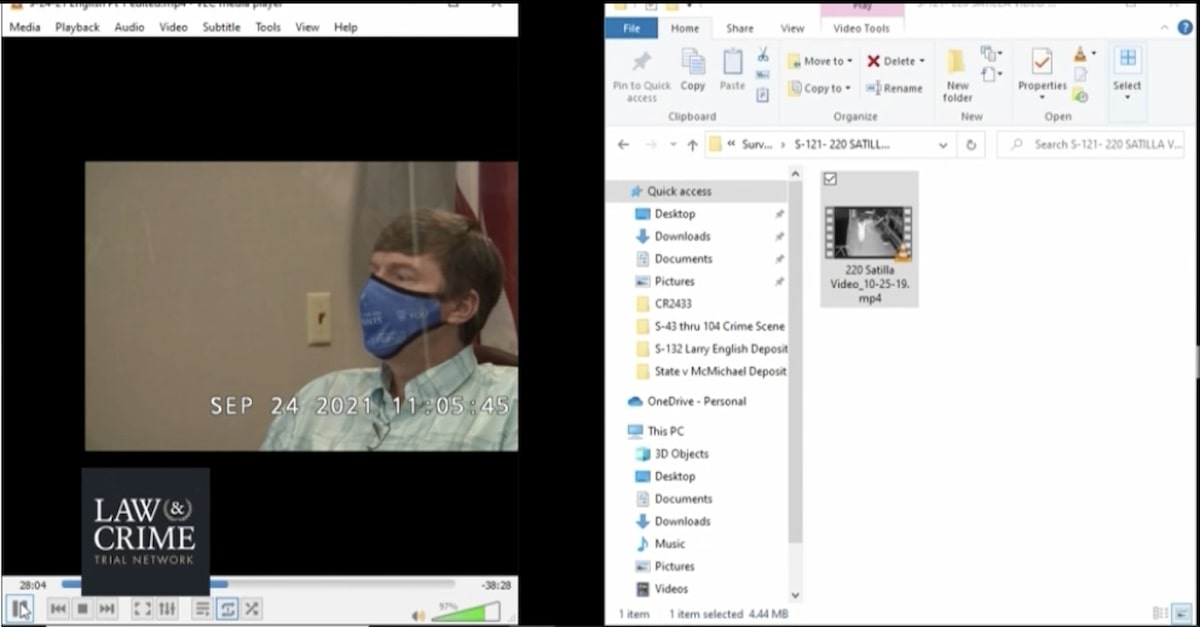 Still frame from a videotaped deposition of Larry English, the Georgia homeowner whose property takes focus in the trial of Ahmaud Arbery’s accused murderers.

The owner of a Georgia property, which the three men accused of murdering Ahmaud Arbery claimed to have been defending, agreed during a deposition that it was “normal” and “common” for visitors to come in and out of the under-construction home. He also testified that the Black man spotted in his surveillance footage, believed to be Arbery, did not damage or disturb his property in any way.

Larry English’s testimony, from a four-hour deposition entered by prosecutors on Thursday, undermines the chief defense offered by Arbery’s accused murderers: gunman Travis McMichael, his father Greg McMichael, and William “Roddie” Bryan, who have asserted that they acted out of a “duty and responsibility” for the residents of the community in Brunswick, Ga.

Questioned by Assistant District Attorney Paul Camarillo, English testified that he did not authorize the McMichaels to confront anybody at his site. He barely knew Bryan, only from the videos, he added.

Known as Satilla Shores, the construction site that Arbery visited on the day he was killed attracted a number of visitors. English did not post any “No Trespassing” signs on it, and he did not report any property stolen from it. He did, however, report having belongings stolen from his boat, which was kept on the dock. After that incident, English installed surveillance footage on the construction site, and he spoke to prosecutors about that footage during a deposition on Sept. 24, 2021.

Too ill to testify in court, English’s deposition was presented to the jury, where Camarillo asked him about his 911 calls reporting those captured in the footage.

“I have a house that’s under construction. I have it down at 220 Satilla Dr., Satilla Shores in Brunswick,” English told the operator. “I’ve got a trespasser there. He’s a, he’s a colored guy.”

Under Georgia’s criminal trespass law, entry into a “land or premises” is only illegal if done with an “unlawful purpose” or where there is a “No Trespassing” sign. There is no evidence that the Black man whom English referred to in this call was Arbery or violated the law in any way. Though English said the man was “plundering around,” English clarified that he did not use that phrase in the sense of stealing anything.

“Just looking around and checking things out,” English noted.

English told the 911 operator that he believed the man on his property was under the influence of drugs and alcohol, though he conceded during his deposition that he had no basis to believe that. He added that the footage was taken at night, and the camera’s infrared taping may have created the impression that the man was staggering.

“You said it looked like he was up to no good. Do you remember why you said that?” Assistant District Attorney Camarillo asked.

“Did this person do any damage to the property or disturb anything that you know?” the prosecutor pressed.

English once again replied in the negative.

When trial began last week, Assistant District Attorney Linda Dunikoski framed the case to the jury as one about “assumptions and driveway decisions.” The McMichaels and Bryan, prosecutors say, made a snap judgment after seeing a “Black man running down the street,” leading to Arbery’s alleged murder on Feb. 23, 2020.  Video of the killing would not emerge until months later, inspiring national outrage over what his family described as a lynching. Federal and state prosecution for Arbery’s alleged murderers followed, and Arbery’s family filed a federal lawsuit accusing local authorities of engaging in a cover-up in the months before the videos sparked national attention to the case.

Trial so far has focused only indirectly on matters involving race, when prosecutors quoted statements from the defendants and witnesses. The mostly white jury has one person of color after defense attorneys used peremptory strikes in a manner Judge Timothy Walmsley found smacked of “intentional discrimination,” but he said that precedent tied his hands from being able to redress it.

Before lunch recess, the recording of the prosecution’s questioning of English concluded, and Travis McMichael’s attorney Robert Rubin questioned English during the Thursday afternoon session about his surveillance system. The homeowner agreed that he had 13 cameras in front of the house, one in the garage, another in the living, two in the back of the house and another pair in the dock.

Hoping to undermine a key revelation from direct examination, Rubin elicited testimony from English that he give his blessing for another man to check in on the Satilla Shores property: Diego Rivera, his next-door neighbor.

Update—Nov. 11 at 3:18 p.m. Eastern Time: This story has been updated to include information about English’s cross-examination.