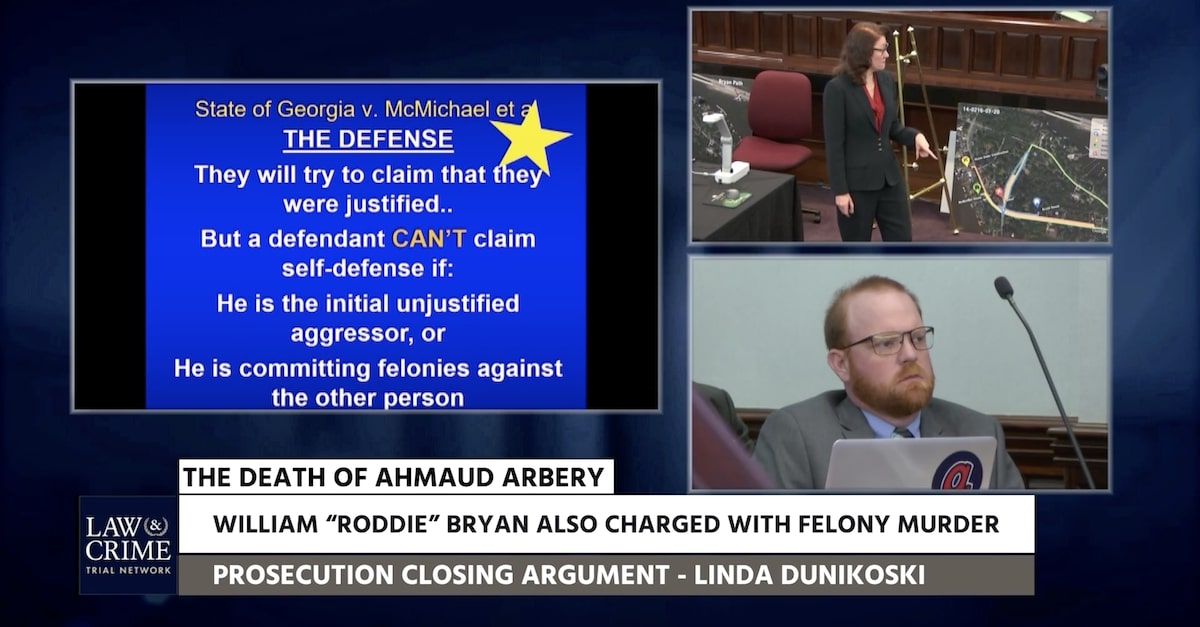 Linda Dunikoski, the lead prosecutor against Ahmaud Arbery’s accused murderers, displays a slide on the use of deadly force during summations.

A little more than two weeks after trial began, a Georgia prosecutor slammed what she described as the “self-serving” rationalizations offered by the men charged with murdering Ahmaud Arbery. The government’s roughly 90-minute closing arguments systematically picked apart defense arguments that they tried to effectuate a citizen’s arrest within the bounds of the law.

According to the prosecutor, self-defense cannot be invoked if a defendant provokes somebody and “Then you go, ‘Oh, look, he attacked me first.'”

Gunman Travis McMichael, his father Greg McMichael and William “Roddie” Bryan all face murder charges for pursuing Arbery in the confrontation that led to the 25-year-old Black man’s death. It is undisputed that the younger McMichael killed Arbery by firing three shots at him at point blank range on Feb. 23, 2020.

Defense attorneys for the trio claim that they were trying to effectuate a citizen’s arrest of Arbery. They claim to have suspected Arbery of burglary on the construction site of Brunswick, Ga. homeowner Larry English. Arbery was spotted in surveillance footage on English’s property in the Satilla Shores neighborhood, but English testified that it was “common” and “normal” for the site to attract onlookers.

In the words of Dunikoski, Arbery was being a “lookie-loo.”

“Lookie-loos going in there at night. You shouldn’t be doing that. We all know this. Okay,” Dunokoski conceded. “But it’s trespass. It’s a misdemeanor.”

Under Georgia law, presence inside a property only qualifies as criminal trespass if there is evidence of an “unlawful purpose” or a “No Trespassing” sign, which was not on English’s property. One local law enforcement witness said he would have given Arbery a trespass warning.

Dunikoski noted that a citizen’s arrest can only be executed if a person observes the commission of a felony, and the McMichaels and Bryan had only “speculation” that Arbery committed any crime when they chased him.

Through their involvement in Arbery’s pursuit, Dunikoski said, all three put the 25-year-old in fear for his life and safety.

“Everyone gets a Super Bowl ring,” Dunikoski quipped, referring to their shared responsibility for the alleged murder.

When Travis McMichael took the stand, his defense attorneys emphasized the defendant’s training and service in the U.S. Coast Guard. His father Greg McMichael worked as a law enforcement officer for decades. Defense attorneys have played up those associations at every turn, but Dunokoski said that these do not give the defendants a free pass.

During last week’s cross-examination of Travis McMichael, Dunikoski repeatedly quizzed him about his knowledge about the Fifth Amendment right to remain silent. McMichael conceded that Arbery was “just running” when the three gave chase. McMichael insisted that it was suspicious that Arbery wouldn’t talk to them.

Ridiculing that testimony, Dunikoski summarized that behavior to a jury on Monday as follows: “I’m going to order you to talk to me, and if not, I’m going to pull out a shotgun on you.”

The prosecutor noted that the defendants did not initially tell Glynn County police that they wanted to arrest Arbery, and McMichael blamed any omissions in his law enforcement statements on the trauma of killing a man. Dunikoski scoffed that at that notion.

“I don’t dispute that it was likely the most traumatic experience of his life,” Dunikoski said. “How did Mr. Arbery’s day go for him?”

In an evocative analogy, Dunikoski had the jury imagine three “schoolyard bullies” throwing “one kid against the locker.”

“They menacing him, threatening him, they get him on the locker and he’s trapped,” Dunikoski said.

Greg McMichael had said that Arbery was “trapped like a rat,” trial evidence showed.

Though the defense claims that Arbery lunged toward Travis McMichael’s weapon before the shooting, Dunikoski compared that to bullies provoking an attack and saying that the targeted person started it.