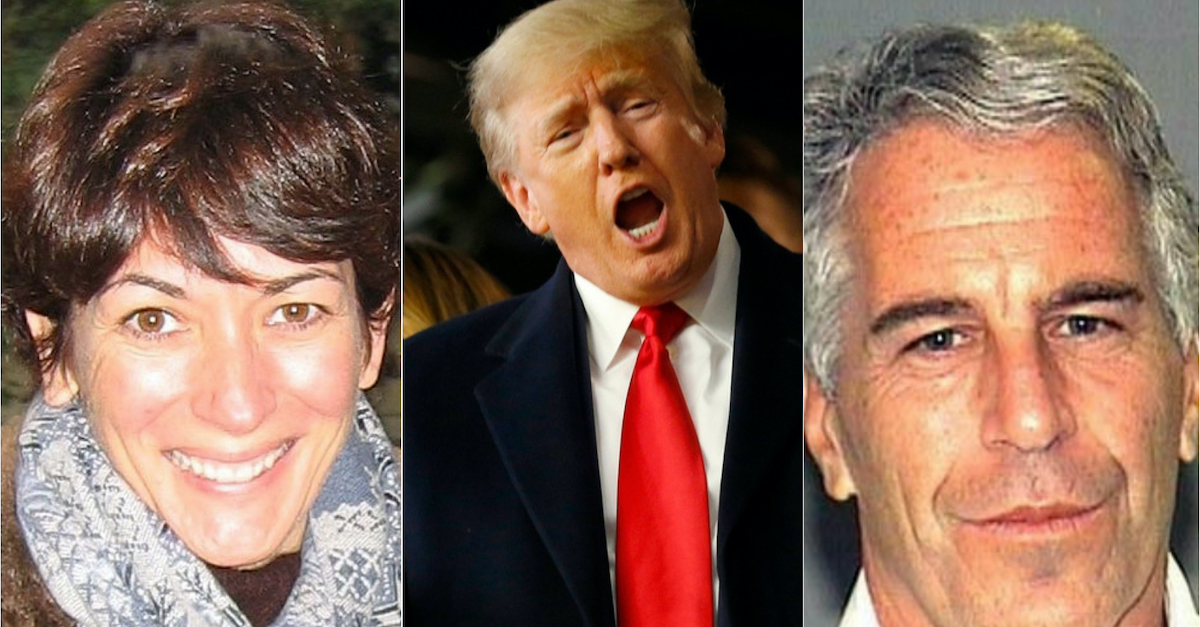 “Jane,” the first accuser to testify against Ghislaine Maxwell at her sex trafficking trial, agreed that Jeffrey Epstein introduced her to Donald Trump when she was 14 years old, long before he became a U.S. president.

“Jane” answered in the affirmative.

Pressed by Menninger, “Jane” agreed that she said Epstein drove her to Mar-a-Lago in a dark green car when she was 14.

The defense attorney did not explore the alleged interaction much further during her questioning. “Jane” did not make any allegation about sexual abuse—or any other type of wrongdoing—by the man who would later become the 45th president of the United States.

Footage released by NBC News in 2019 showed Trump and Epstein partying at Mar-a-Lago all the way back in 1992. In 2002, Trump told a reporter for New York Magazine who was profiling Epstein: “I’ve known Jeff for fifteen years. Terrific guy.”

“He’s a lot of fun to be with,” Trump reportedly added. “It is even said that he likes beautiful women as much as I do, and many of them are on the younger side. No doubt about it — Jeffrey enjoys his social life.”

Trump distanced himself from Epstein after the latter’s arrest in 2019.

Trump wished Maxwell well after her arrest in 2020.

Trump was not the only powerful person’s name to come up during “Jane’s” testimony.

“You remember Prince Andrew being on a flight with you?” Menninger asked.

“Jane” again said yes, without making any allegation against the British royal.

“Jane” insisted repeatedly during cross-examination that many of the notes were inaccurate.

“This is just someone jotting down notes,” she said.

Mitchell Epner, a former federal prosecutor who led intake on sex-trafficking cases in the District of New Jersey in 2003 and 2004, broke down the law on these exchanges in an interview.

“The questions to Jane about her alleged prior inconsistent statements are governed by Federal Rule of Evidence 613,” Epner told Law&Crime. “The witness can be questioned, but the judge has discretion whether to allow extrinsic evidence of those prior statements (like FBI 302s). Ordinarily, a FBI 302 specifically recites that it is not a verbatim record of the interview, to avoid it being placed into evidence.”

“Jane” is the witness whose allegations prosecutors told in the first sentence of the government’s opening statement on Monday. In addition to attacking her memory, Maxwell’s attorneys have suggested that she is financial motivated. Seeking to stave off this line of argument, prosecutors anticipated the matter on direct examination, where “Jane” acknowledged having received a $5 million settlement. After legal fees and expenses, approximately $2.9 million went to her, she testified.

When approached by a man and a woman at camp. prosecutors said, “Jane” did not know the pair were “dangerous predators.” Maxwell pleaded not guilty to six counts of sex trafficking and violations of the Mann Act, and her attorney Bobbi Sternheim told a jury that Maxwell is “lightning rod” being treated as a stand-in for Epstein, whose death in a federal jail scuttled his prosecution.

(Photos of Maxwell and Epstein via DOJ; Trump’s photo via Michael Zarrilli/Getty Images)