Ex-Priest Robert Brennan Gets Probation for Lying About Abuse Accuser

Defrocked Philadelphia Priest Who Lied to Feds About Alleged Sexual Abuse Victim Does Not Repent, Gets No Jail Time 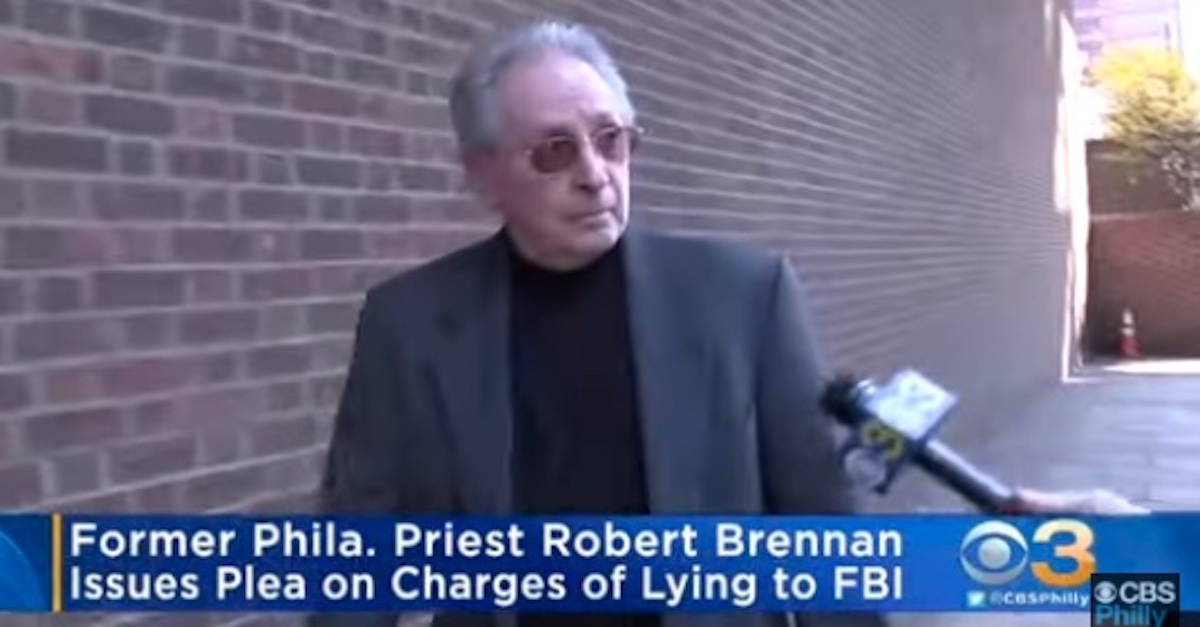 Robert Brennan, seen here in November 2021 arriving at a Pennsylvania court to plead guilty to lying to the FBI (image via YouTube screengrab.)

A defrocked Catholic priest whose accuser died of a drug overdose in 2013 has been sentenced to five years of probation for lying to the FBI about not knowing his alleged victim.

Robert Brennan, 84, had admitted to telling federal investigators in April 2019 that he did not know his accuser as a child, when the one-time priest in fact did know him.

Both prosecutors and Brennan’s defense lawyers had agreed to the five-year probation sentence, which includes two years of home confinement with location monitoring.

The sentence punctuates a years-long ordeal for the family of Sean McIlmail, who died from a drug overdose in October 2013, shortly after prosecutors in Philadelphia filed charges against Brennan for allegedly sexually abusing McIlmail.

Those charges had followed a 2011 Philadelphia grand jury report that alleged that Brennan had engaged in “inappropriate or suspicious” behavior with more than 20 boys from four different parishes, the prosecutor’s sentencing memo said.

The abuse of McIlmail allegedly happened when Brennan was a priest at Resurrection of Our Lord Church, where McIlmail, his parents, and his brother were parishioners. McIlmail had come forward in 2013 and told Philadelphia police that Brennan abused him between 1998 and 2001, when he was a middle school student at the church’s school.

According to court documents, McIlmail’s report was the basis for the 2013 criminal charges against Brennan. After McIlmail died, those charges were dismissed.

McIlmail’s family filed a civil lawsuit against the Archdiocese of Philadelphia and Brennan the month after his death. That lawsuit, according to the DOJ, settled in May 2018 for an undisclosed amount.

In October 2018, the FBI launched an investigation into Brennan to determine whether any federal sexual abuse crimes had been committed.

As part of federal investigation, the FBI interviewed Brennan in April 2019, and during that interview, Brennan denied knowing McIlmail and his family prior the 2013 criminal charges.

That was a lie.

Brennan knew all four members of the McIlmail family prior to 2013, and specifically during the time period when McIlmail had alleged that he was abused.

But as he arrived for his sentence on Thursday, Brennan appeared defiant, telling a reporter from local CBS affiliate KYW that he was “absolutely not” sorry for the offense that he admitted to committing.

He also didn’t apologize in court, and instead reportedly recited a bible verse about false accusations.

Prosecutors said that the sentence holds Brennan accountable for his actions.

“With this sentence handed down today, we hope it brings a sense of justice and closure to this case,” U.S. Attorney Jennifer Arbittier Williams said in a press release Thursday.

That’s not quite the case, according to McIlmail’s family.

Representatives from the Archdiocese of Philadelphia did not return Law&Crime’s request for comment on Brennan’s sentence and apparent lack of remorse.