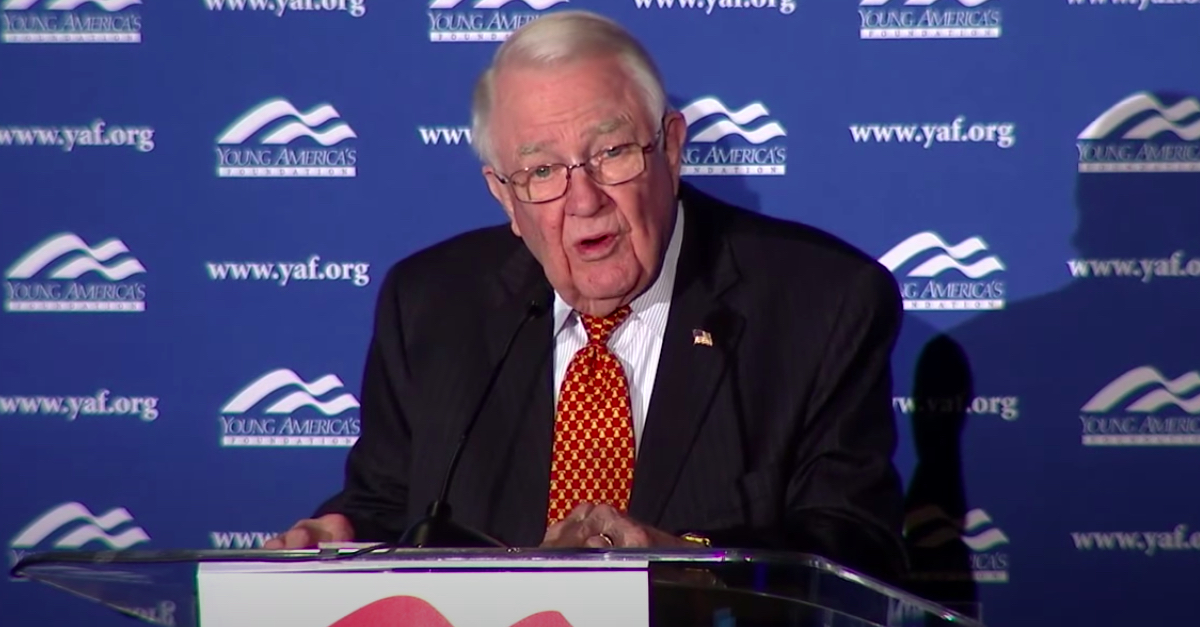 The 75th U.S. Attorney General Edwin Meese, now 89, and the American Constitutional Rights Union has thrown his support behind a longshot lawsuit asking a federal judge in New York to block Major League Baseball (MLB) from moving next month’s All-Star game out of Atlanta. The eyebrow-raising amicus brief from the Ronald Reagan appointee, however, does not attempt to advance the legal arguments put forward in the original complaint. Instead, the Meese brief relies on theories which do not address issues before the court.

As previously reported by Law&Crime, attorney Howard Kleinhendler, formerly a member of Sidney Powell’s “Kraken” legal team, filed the lawsuit on behalf of the Job Creators Network, a conservative nonprofit group founded by former Home Depot CEO Bernie Marcus. The group alleged that MLB, the players union, and Commissioner Rob Manfred, violated the civil rights of Georgia’s residents and businesses by moving the game to Denver in response to the Peach State’s new voting law (SB 202), which opponents have called a “voter suppression bill” meant to appease “conspiracy theorists” upset about the 2020 election outcome. The lawsuit asked a federal judge to issue an order prohibiting MLB from moving the game and for compensatory damages of at least $10 million and punitive damages of “not less than $1 billion.”

Legal experts resoundingly criticized the suit for asserting constitutional claims (invoking the Dormant Commerce Clause and the Equal Protection Clause) and contending that MLB, a private business, is somehow a “state actor acting under the color of law.”

Instead of doubling-down in support of those arguments, Meese’s brief argued that Georgia’s voting law is constitutionally valid and that MLB has “a legal responsibility to stakeholders to focus on running a successful business, not to detract from that duty by engaging in partisan politics.” He does not address Kleinhendler’s constitutional claims and state-actor argument.

The first half of the brief signed by attorney Kristina S. Heuser argues that SB 202 is substantively permissible under the U.S. Constitution.

“SB 202’s provisions are commonsense safeguards against fraud, dilution, or debasement. Some of these measures increase transparency and inform the public, with the result that such measures build public confidence in election outcomes,” Meese wrote. “Other provisions like security features on paper to prevent forgeries or requiring photographic identification to confirm the identity of the person attempting to cast a ballot prevent vote dilution and debasement, which the Supreme Court has repeatedly and consistently held is not only permitted by the Constitution, but indeed protects voting rights for lawful voters.”

But, as attorney and legal commentator Mike Dunford pointed out, whether Georgia’s law is constitutional has no bearing on whether the league can choose to move the site of the game in protest—because the league’s conduct is protected under the First Amendment.

“Georgia’s new election law could be the bees knees, the gnat’s ass, and any other alliterative arthropod anatomy you like. Major League Baseball would still have a right to object to it. Assume that MLB is in the wrong all you want on that point. It doesn’t matter,” Dunford tweeted. “Having wrong opinions about politics is not actionable. Neither is having opinions about politics that Ed Meese doesn’t like. No part of the argument that Georgia isn’t really engaged in racist voter suppression is relevant to any of the causes of action in this case.”

No part of the argument that Georgia isn't really engaged in racist voter suppression is relevant to any of the causes of action in this case.

Meese then makes the claim that that MLB is “a for-profit business in the sports entertainment industry” which is obligated to run its business “in a manner that generates profits for the shareholders of the member baseball team.”

This is likely to raise several problems as well, not the least of which is that it undercuts the claim that MLB is a “state actor.” First, there is no claim in the lawsuit asserting that MLB’s decision harmed the interest of its shareholders. Second, the cases Meese cites to concern corporate entities, while the league is an unincorporated association that has not been recognized to owe a fiduciary duty to its member teams. And third, even if such a duty existed, Meese does not make any argument as to how that duty was breached.

“The ‘profit-making responsibilities’ of the Commissioner and other top MLB executives ‘inevitably entail the exercise of business judgment similar to that of a corporate director’ or corporate officer,” Meese claimed. “These responsibilities do not permit them to act with ‘other improper motives.’”

The brief doesn’t elaborate on what constitutes such “improper motives,” but does state that the league made a poor business decision because it employed political considerations. This does not appear to amount to an improper motive under the “Business Judgment Rule.” Under that standard, a court “will uphold the decisions of a director as long as they are made (1) in good faith, (2) with the care that a reasonably prudent person would use, and (3) with the reasonable belief that the director is acting in the best interests of the corporation.” It is a difficult burden for a plaintiff to overcome, and generally requires showing gross negligence, bad faith, or a conflict of interest motivated the decision.

Near the end, the brief says that baseball is “America’s pastime” and that the “United States benefits from” it, but that moving the All-Star Game only fans the flames of “frustration and division.”

The conclusion of the Meese brief does not explicitly demand that MLB be forced to keep the All-Star Game in Atlanta. It also doesn’t make a legal argument.