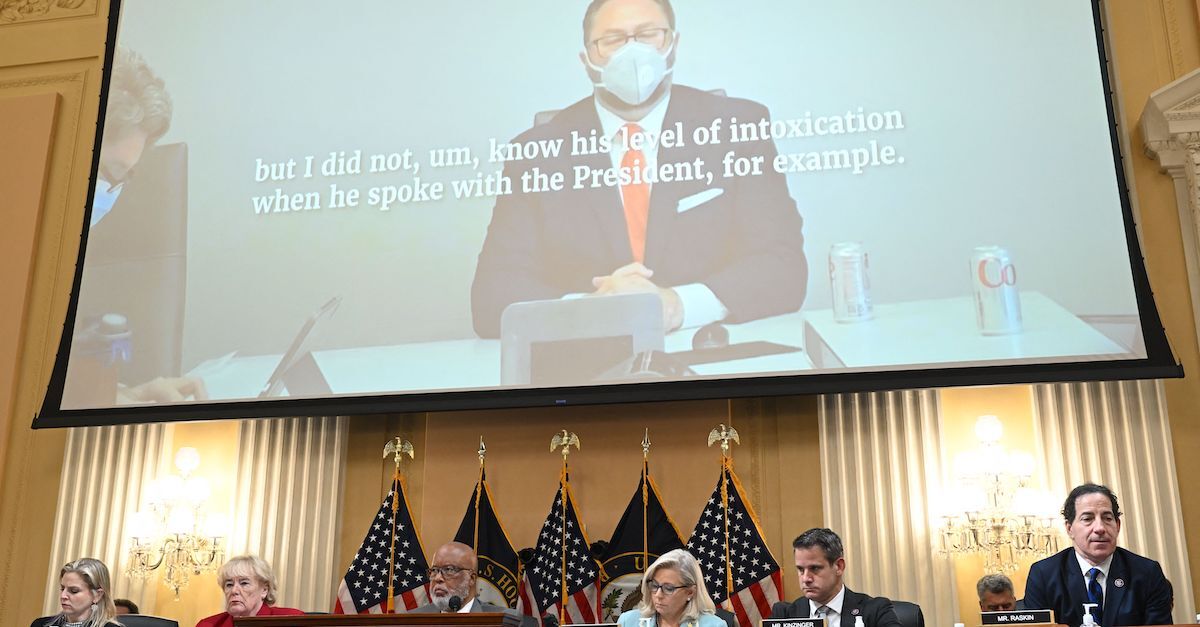 Former Trump campaign Senior Advisor Jason Miller, is displayed on a screen during a hearing by the Select Committee to Investigate the January 6th Attack on the US Capitol on June 13, 2022 in Washington, DC.

One of Donald Trump’s top lawyers was drunk on the night that the so-called “Big Lie” sprang into being—and not just on power, the 45th president’s senior aide told the Jan. 6 Committee in a deposition aired on Monday.

As the proceedings began, Chair Bennie Thompson (D-Miss.) began with a bold claim that Trump “knew” that he lost before peddling his election fraud allegations, a point widely believed to be central to any possible prosecution of the 45th president in connection with the Capitol attack.

Vice Chair Liz Cheney (R-Wyo.) did not hold back either about Trump’s lawyer Rudy Giuliani, the former mayor of New York.

“You will also hear testimony that President Trump rejected the advice of his campaign experts on election night and instead followed the course recommended by an apparently inebriated Rudy Giuliani to just claim he won and insist that the vote counting stop—to falsely claim everything was fraudulent,” Cheney said.

Rep. Zoe Lofgren (D-Calif.) noted that the Trump campaign raised “hundreds of millions of dollars” from supporters who were falsely told their donations would pay for legal challenges.

“The Big Lie was also a big rip-off,” Lofgren said.

“So there’s no there there?” Meadows asked, giving an electoral spin to the famous Gertrude Stein quotation.

The committee’s second hearing focused on the lengths Trump went to press claims that failed in more than 60 state and federal courts. Trump’s former campaign manager Bill Stepien had been slated to testify pursuant to a subpoena, but he canceled his appearance on the morning of the hearing due to a medical emergency. His wife reportedly had been in labor.

Stepien had been slated to sit on a panel with ex-Fox News political editor Chris Stirewalt, who was fired after calling President Joe Biden’s victory in Arizona.

The second panel was expected to feature two key lawyers with insight into Trump’s failed legal blitz: ex-Jones Day partner Benjamin Ginsberg, who resigned rather than join his powerhouse firm in trying to overturn the election, and former U.S. Attorney BJay Pak, who previously told the Senate that Trump intended to fire him for not backing his election fraud claims.

Pak is the attorney whom the 45th president called a “Never Trumper” in his infamous phone call urging Georgia Secretary of State Brad Raffensperger (R) to “find” 11,780 votes.

The final witness, Al Schmidt, was the sole Republican on the Philadelphia County Board of Elections.

After receiving death threats from Trump supporters because of insistence on counting every vote in the deep blue jurisdiction, Schmidt resigned late last year.

“I Think the Mayor Was Definitely Intoxicated.”

Shortly into the proceedings, the committee shared video supporting Cheney’s claim that Giuliani was “apparently inebriated” on election night by rolling tape on depositions with several of Trump’s top advisors.

“I think the Mayor was definitely intoxicated,” said Jason Miller, then Trump’s senior advisor, referring to the night of the initial election returns (and not Giuliani’s memorable press conference marked by his hair-dye meltdown).

When asked to expound on Giuliani’s potential level of intoxication during his discussion with Trump about what the then-president should say, and when, Miller hedged somewhat.

“The mayor was definitely intoxicated but I do not know his level of intoxication when he spoke to the President,” Miller said.

“It was far too early to be making any calls like that,” Stepien said during his deposition, adding that the ballots were still being counted, and that the could would last days.

Miller echoed this to the then-president as well.

“I remember saying that, to the best of my memory, I was saying that we should not go declare victory until we had a better sense of the numbers,” Miller told the committee.

The president’s daughter also appeared to share this view.

“I don’t know that I had a firm view as to what he should say,” Ivanka Trump told the committee in her deposition. “The results were still being counted. It was becoming clear that the race would not be called on election night,” she added.

Stepien said that he urged Trump on election night to make a statement that votes were still being counted, and that it was too early to call the race but that the campaign thinks it’s in a “good position” and will have more to say in the coming days.

Trump, Stepien said, didn’t want to do that.

“The president disagreed with that,” Stepien said in his deposition. “He thought I was wrong, he told me so.”

Trump told Stepien that he was going to “go in a different direction,” Stepien said.

When asked who was pushing Trump to declare victory, Miller named one person: Giuliani.

“I think, effectively, Rudy Giuliani was saying we won [the election], they’re stealing it from us,” Miller said, adding that Giuliani told Trump that the campaign needed to declare victory—and said that those on the campaign who didn’t agree with that position were being “weak.”

The video compilation included testimony from Giuliani himself, he said he spoke to Trump several times on election night.

The committee’s multi-media presentation included witness deposition testimony about the decision from Fox News to call the state of Arizona for Biden on election night—a decision that reportedly sent the Trump campaign spinning.

“Was there anger directed at Fox News for making a call, as opposed to disappointment that the campaign lost Arizona?” a committee attorney asked Miller.

“All of the above,” Miller said, adding that there was a sense of disappointment with Fox and also a concern that the campaign’s data wasn’t accurate.

Stirewalt, who told Thompson that there was no basis for Trump to declare victory on election night, said unequivocally that “Joseph Robinette Biden, Jr., of the great state of Delaware” won the 2020 presidential election.

“That’s the bottom line,” Thompson replied. “We had an election, Mr. Trump lost, but he refused to accept the result of the democratic process.”

Thompson then handed proceedings over to Lofgren, who asked Stirewalt to explain the “Red Mirage” phenomenon.

“In the 40 to 50 years that Americans have chosen to vote early [or by mail or absentee], Democrats have preferred that,” Stirewalt explain, noting that, conversely, Republicans tend to vote more on election day.

“Republicans win election day, and Democrats win the early vote, and then you wait and start counting,” Stirewalt said. He added that some states hold off on counting all the votes until election day, which can explain why it can appear that a Republican candidate is in the lead early on.

Trump, Stirewalt said, is the first candidate who had “ever tried to avail themselves of this quirk,” but that the Fox News decision desk was prepared.

“We had gone to great pains—I’m proud of the pains we went to—to make sure we were informing viewers that this was going to happen, because the Trump campaign and the president made it clear they were going to exploit this anomaly,” Stirewalt said.

“It was really controversial to our competitors who we beat,” Stirewalt noted. “We got the news first,” he added, praising the network’s decision desk and politics team.

“Our poll in Arizona was beautiful,” Stirewalt said. “It was doing just what we wanted it to do … at some point it became clear that Arizona was getting ready to make a call.”

Stirewalt said that the team knew the Arizona call would be “controversial,” but that by the time they learned people were “freaking out” about it, they had moved on to look at results from other states.

By the time the election was called for Biden, Stirewalt said, the issue was all but settled.

“As of Nov. 7, what were the chances of President Trump winning the election?” Lofgren asked Stirewalt.

“After that?” Stirewalt clarified.

Lofgren’s key role in the second hearing was a departure from the tone set by the debut hearing, which was mostly steered by the committee’s chair and vice chair. She hammered home a recurring theme so far: that what has been called the “Big Lie” made the attack on the U.S. Capitol an inevitability.

“The attack on Jan. 6th was a direct and predictable result of Mr. Trump’s decision to use false claims of election fraud to overturn the election and cling to power,” Lofgren said.

The day after Jan. 6, the author of the so-called “coup memo” John Eastman—a lawyer who devised a six-point plan to overturn the election—called ex-Trump attorney Eric Herschmann, who testified that he asked Eastman: “Are you out of your effing mind?”

“I only want to hear two words coming out of your mouth from now on: orderly transition,” Herschmann said he told Eastman, who sued to prevent the committee from obtaining his post-election communications. That litigation was mostly unsuccessful.