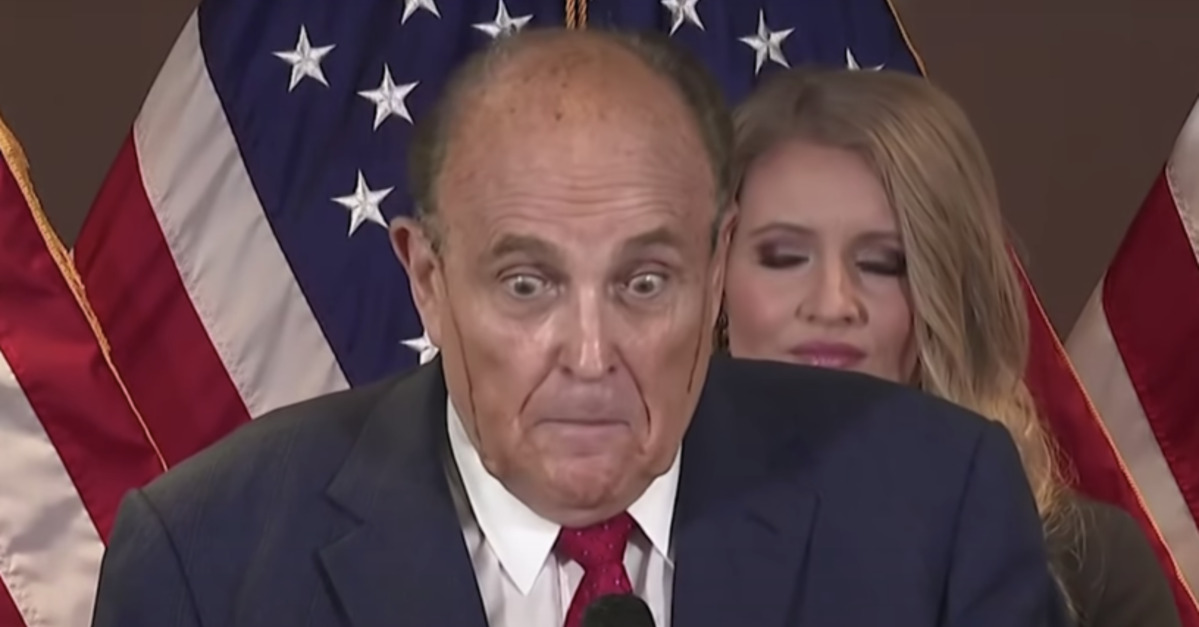 Streams of water poured down the faces of two men, as the story now goes, during a press conference for the ages. One of the men, a CEO, was in tears. The other, an attorney for the president of the United States, was sweating what appeared to be hair dye or some other cosmetic.

“Now I’m going to ask Sidney Powell to describe to you what we can describe about another totally outrageous situation,” said Giuliani at the perspiration-filled Nov. 19th event.

“I don’t think most Americans know that our ballots get calculated, many of them, outside the United States and are completely open to hacking, completely open to change, and it’s being done by a company that specializes in voter fraud,” the former mayor of New York City said as he handed his microphone over. “I’ll let Sidney describe that to you.”

As that first unsupported accusation was made against Dominion Voting Systems, two large globules of sweat mixed with what appeared to be Giuliani’s cosmetic answer to the consequences of aging. Streaming down either side of his face, the dark-brown bead on the right side would ultimately stop just above the line of his lips. The left-hand bead would make it all the way down to the beginning of the excited attorney’s chin.

We’ve seen it. And so did the Dominion CEO; Poulos was watching it all.

Thirty minutes had gone by. Behind Giuliani was Trump’s then-legal advisor Jenna Ellis. The accusations, improbable as they were, had the imprimatur of the country’s right-wing political party behind them. The still-seething president’s men and women were lobbing grenades at Poulos’s company in the form of innuendo and vagaries about ballots somehow not being secure.

Then it was Powell’s turn.

“Thank you Rudy,” said the so-called “Kraken” attorney, who currently faces the prospect of possible suspension or disbarment for post-election litigation. “What we are really dealing with here and uncovering more by the day is the massive influence of communist money through Venezuela, Cuba, and likely China in the interference with our elections here in the United States.”

“The Dominion voting systems, the Smartmatic technology software and the software that goes in other computerized voting systems here in as well, not just Dominion, were created in Venezuela at the direction of Hugo Chavez to make sure he never lost an election after one constitutional referendum came out the way he did not want it to come out,” Powell said, wildly accusing the Colorado-and-Canada-based company of a plot linked to a dead former president in Latin America — supposedly rigging the presidential vote in favor of the Democratic Party during the 2020 election.

Poulos was beside himself by then.

From The New York Times Magazine:

“Oh, my God!” he screamed. “I can’t believe what’s going on!” He yelled so loudly that his wife and two teenage children came running into his home office. They found him there, beside himself, crying. His children had never seen him remotely emotional about his work; now they stared, shocked and mute.

In late January 2020, and sometime after drying his tears, Poulos and Dominion’s other principals decided to sue Giuliani and Powell (among others) for defamation seeking over one billion dollars in damages.

“As a result of the defamatory falsehoods peddled by Giuliani—in concert with Sidney Powell, Russell Ramsland, L. Lin Wood, Mike Lindell, Patrick Byrne, Lou Dobbs, Fox News, Fox Business, Newsmax, One America News Network (‘OAN’), The Epoch Times, and other like-minded allies and media outlets determined to promote a false preconceived narrative about the 2020 election—Dominion’s founder and employees have been harassed and have received death threats, and Dominion has suffered unprecedented and irreparable harm,” the 107-page lawsuit filed in D.C. District Court against Giuliani alleged.

Earlier this month, a Trump-appointed judge allowed allowed those defamation lawsuits to go forward–brutally rubbishing both Giuliani’s and Powell’s efforts to have the cases dismissed.

“Remember, this is such a short timeframe, and this is an elite strike force team that is working on behalf of the President and the campaign to make sure that our Constitution is protected,” Jenna Ellis memorably said when it was her turn at the podium on Nov. 19. “We are a nation of rules, not a nation of rulers. There is not someone that just gets to pick who the next President is outside the will of the American people. That is our task, because when we talk about voter fraud, it’s actually election official fraud. That cannot stand.”