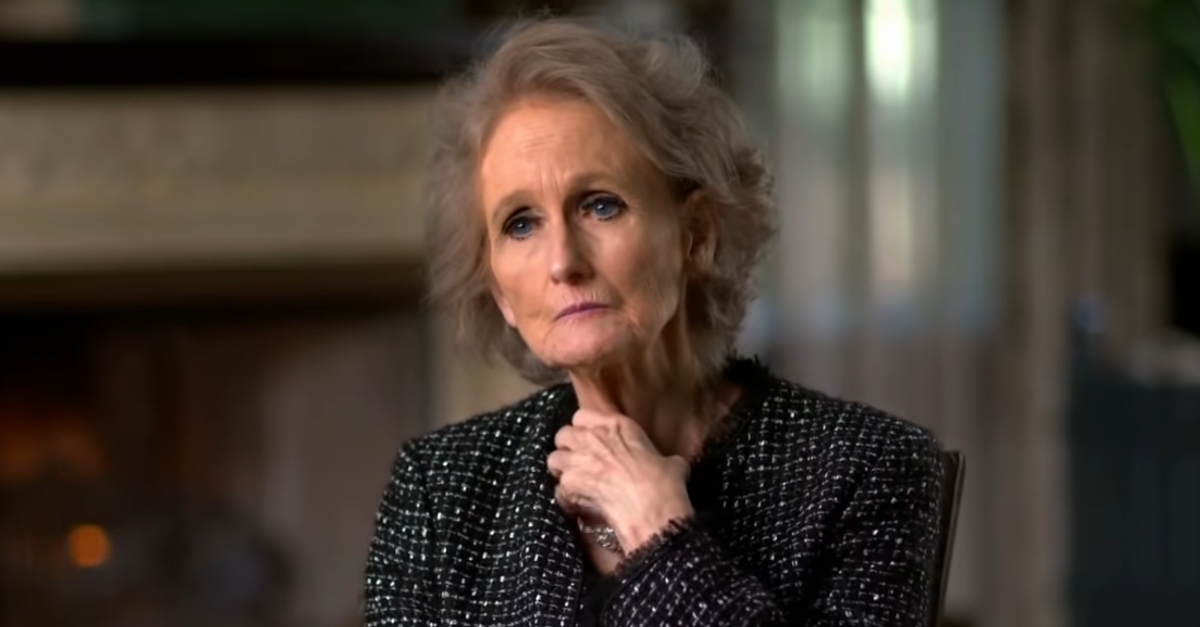 The state will not retry a woman who was previously convicted of murdering her real estate mogul husband over a possible divorce.

Margaret Rudin, now 79, shot and killed Ron Rudin, 64, in December 1994, and got help discarding the remains, burning her spouse with gasoline in an antique trunk, authorities have said. But Clark County District Attorney Steve Wolfson said that even if Rudin were convicted again at a retrial, she would likely be sentenced to time served, according to The Las Vegas Review-Journal. What’s more, John Sadler, Communications Director with the Nevada Attorney General’s Office, confirmed to Law&Crime that the office has no intention of appealing a federal judge’s decision from May.

Citing ineffective trial counsel, a federal judge last month reversed Rudin’s 2001 conviction for first-degree murder with the use of a deadly weapon and unauthorized surreptitious intrusion of privacy by listening device.

Defendant Rudin was released on parole back in January 2020 after serving a 10-year minimum of a consecutive life terms. Her current lawyer Greg Mullanax asserted prosecutors would likely lose if they did go back to court.

“I can guarantee a new trial won’t be like the last trial,” he told the outlet.

Rudin said she is writing a book about the case.

“I’m writing a book and putting all of the information in there,” she said.

Ron Rudin, a Las Vegas-based real estate mogul, was shot four times in the head with a .22 caliber firearm after going missing in December 1994. He had disappeared walking to his office from his wife’s brand new antique shop. Her business was located in a strip mall he owned, according to the judge’s ruling.

Testimony was mixed as to whether the couple was on the outs. Rudin’s uncle testified that the couple “were holding hands and just being like a married couple should be” on the day before Thanksgiving 1994. A longtime friend and business associate of Ron’s said that Margaret Rudin seemed happy with the way her store was going, and that Ron “was putting everything behind her.” But defendant Rudin’s sister testified the couple’s relationship appeared troubled between August and December 1994 in part because of Ron having an affair, and also because of “some tensions about money.”

Ron Rudin’s estate lawyer testified his client had said that his wife “had made some violent overtures to some employees of his and he was getting quite concerned for his own welfare.”

The sister also said that Margaret Rudin purchased and installed listening devices so she could secretly listen in on her husband’s telephone calls without him knowing.

An employee of the Spy Factory confirmed [the sister Dona Cantrell’s] story, testifying he recalled Rudin purchasing “[a] wireless transmitter, . . . a receiver which would receive the signals from that transmitter, and a tape recorder” around 1991.

The defense tried to rebut this recording claim by bringing up evidence Ron recorded conversations from his office and on his business lines.

He did not show up to work on Monday, Dec. 19, 1994, following the weekend in which his wife’s antique shop opened. It was only on Dec. 20, 1994 that someone initially filed a missing persons report on Ron, and that was by his employees, who claimed his wife showed a lack of concern, the ruling stated.

Margaret Rudin filed a formal report after getting a call from a missing persons investigator, the ruling stated. Others testified that she did, indeed, seem upset during the disappearance; a housekeeper said defendant Rudin was crying on Dec. 20, 1994. There were no signs of struggle at their home when authorities searched on Dec. 22, 1994, the ruling stated. Ron Rudin’s black Cadillac turned up at the now-closed strip club Crazy Horse Too, covered in dust despite Ron’s history of keeping it very clean.

The man’s burnt remains remains ultimately turned up with a similarly burnt antique trunk on Jan. 21, 1995, discovered at Nelson’s Landing approximately 50 miles south of Las Vegas. Prosecutors argued that trunk belonged to Margaret, and that she purchased it from an antiques picker earlier in 1994.

When law enforcement told Rudin that Ron’s remains were located, she showed no emotion. (ECF No. 66-26 at 45, 50–51.) Rather, “Rudin just stared at [the detective] for a second; and then she put her face down in her hands and covered her face for a minute; and then she started to rub her knuckles in her eye; and when she looked up she wasn’t crying.” (ECF No. 85-17 at 253.) Rudin never asked the detectives how Ron died or the circumstances of his death.

“Rudin has made a compelling showing that Amador’s performance as her trial counsel was objectively unreasonable,” the judge wrote. The record showed that her now-dead attorney Michael Amador failed to do a thorough investigation before trial, and that he was absorbed in his own personal matters leading up the court, including taking an “extensive European vacation” several months before, the judge wrote.

The court also noted that there were also possible suspects, including beneficiaries from a trust Ron was involved in, as well as people he knew through business, including a “disgruntled tenant” or allegedly mob-linked investors.