Trump Was Reportedly Recorded Demanding Marie Yovanovitch’s Firing: ‘Get Rid of Her!’ 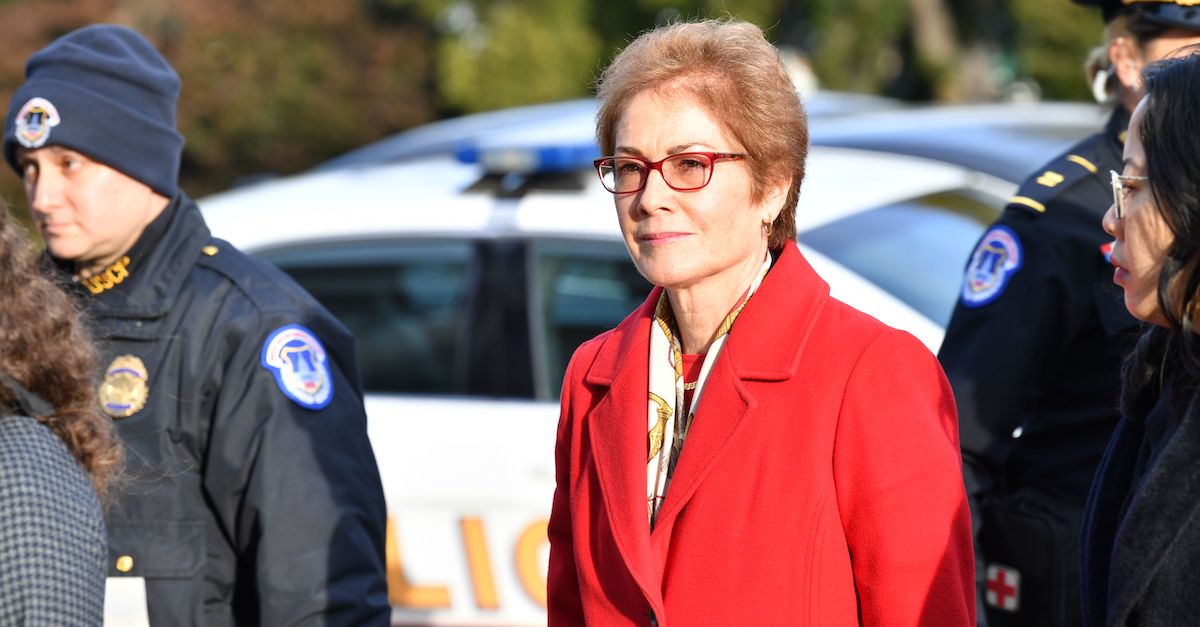 “Lordy, I hope there are tapes,” it is often said. Those hopes have apparently been fulfilled when it comes to the origins of the eventual firing of former U.S. Ambassador to Ukraine Marie Yovanovitch.

A Friday report from ABC News documented the content of the recording, which dates all the way back to April 30, 2018 at a Trump International Hotel dinner in the District of Columbia. It was then that Lev Parnas and Igor Fruman, the indicted Rudy Giuliani associates Trump repeatedly claims he doesn’t know, planted the seeds that Yovanovitch was badmouthing the president and saying things like, “he’s gonna get impeached, just wait.” How prescient, but there’s no proof Yovanovitch ever said it.

In fact, Parnas has since apologized for participating in the smear campaign that cost Yovanovitch her job.

“That’s why I want to apologize to her because, you know, at that point I believed it, but I don’t believe it now after reevaluating and seeing everything that transpired, looking at the documentation again,” Parnas said during an interview with MSNBC’s Rachel Maddow.

Here’s what Fruman reportedly recorded Trump saying in April 2018 (Yovanovitch was not fired until May 2019).

“The biggest problem there, I think where we need to start is we gotta get rid of the ambassador. She’s still left over from the Clinton administration,” Parnas is quoted as saying. “She’s basically walking around telling everybody ‘Wait, he’s gonna get impeached, just wait.”

Yovanovitch, a career diplomat who served in administrations going all the way back to the Reagan years, denied the allegations that she badmouthed the president as “unfounded and false claims by people with clearly questionable motives.” Interestingly, Yovanovitch, Trump and Giuliani now all agree that Parnas and Fruman have credibility problems.

Ambassador David Hale, the Under Secretary of State for Political Affairs, testified in November that in the aftermath of the smear campaign against Yovanovitch, top officials at the State Department discussed the need to have her come out in support of the president and the Constitution.

“Do you recall recommending to anyone within the State Department, including potentially Phil Reeker, that Ambassador Yovanovitch deny the allegations and quote, ‘reaffirm her loyalty, as the Ambassador and foreign service officer, to the President of the United States and the Constitution?’” Daniel Goldman, the lead counsel for House Democrats, asked Hale.

“Yeah. We were working on — throughout this period, I was  advocating strongly for a State Department statement, a very robust full-page statement of defense and praise, actually, for the Ambassador’s work. And the concept was that simultaneously, or in coordination anyway, she would put out a statement. And they were debating in her embassy whether she should do it on camera or a written statement,” Hale responded.

The third-ranking official at the State Department told investigators he thought a statement from Yovanovitch would be beneficial because the attacks on her, which emanated predominantly from Giuliani, had become so “personal.”

Giuliani, Parnas and Fruman allegedly wanted Yovanovitch out the picture so she would be replaced by an ambassador who 1) would be friendlier to their business interests in Ukraine and 2) go along with an effort to get Ukraine to announce investigations of the Bidens.

“I didn’t need her out of the way. I forced her out because she’s corrupt,” Giuliani said, providing no evidence to support that. “She should’ve been fired if the State Department weren’t part of the deep state.”

But Yovanovitch actually had a reputation for being “tough on corruption.”

“In her time in Kyiv, Ambassador Yovanovitch was tough on corruption, too tough on corruption for some, and her principled stance made her enemies,” House Intelligence Committee Chairman Adam Schiff (D-Calif.) said in November. “And Ambassador Yovanovitch did not just ‘piss off’ corrupt Ukrainians, like the corrupt former prosecutor general Yuri Lutsenko, but also certain Americans like Rudy Giuliani, Donald Trump’s personal attorney, and two individuals, now indicted, who worked with him, Igor Fruman and Lev Parnas.”