Pat Cipollone Called Out for ‘Brazen, Disgraceful, and Shameful Lie’ About Impeachment Investigation 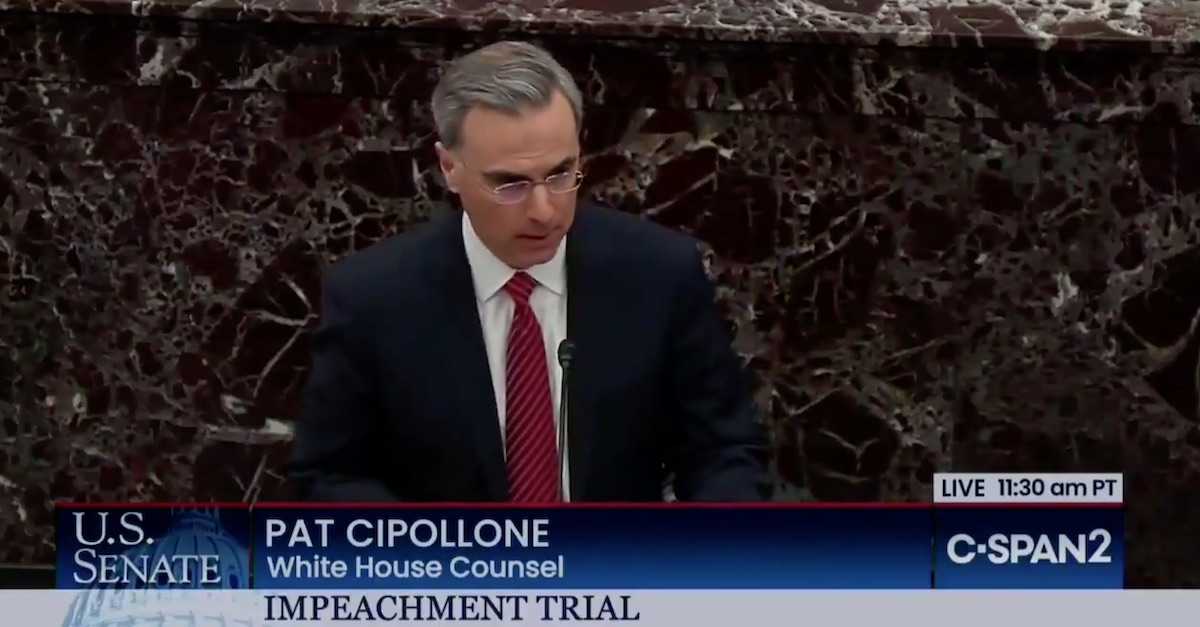 President Donald Trump’s “material witness” attack dog, White House counsel Pat Cipollone, definitely hit all the right notes on Tuesday when it came to appeasing both his boss and the president’s supporters. Criticism of a number of Cipollone’s impeachment trial statements promptly flowed, but one in particular was widely singled out as a “blatant lie.”

“This is unbelievable. A brazen, disgraceful, and shameful lie. Every Republican member of three major House committees was allowed to attend,” Conway said. “Many didn’t.”

This is unbelievable. A brazen, disgraceful, and shameful lie. Every Republican member of three major House committees was allowed to attend. Many didn’t. https://t.co/aE3Yvp2Dh3

Conway’s right about that. Recall: House Republicans who weren’t on the relevant committees made a scene, stormed the SCIF and were kicked out. Some Republicans who actually could be in the room opted not to attend. And for what it’s worth, all of the lengthy deposition transcripts that went public show that Republican lawmakers and Republican counsel Steve Castor were very much allowed to ask the witnesses questions.

Many others, legal observers and otherwise, were quick to respond to Cipollone’s falsehood.

You need to name this for what it is: a lie.

This isn't a rhetorical question. Is anyone planning on filing a bar complaint against Cipollone for blatantly lying to the Senate on national tv? Because that's a violation of 18 USC 1001. @CREWcrew @POGOBlog

Cipollone says “Not even Mr. Schiff’s Republican colleagues were allowed into the SCIF” during impeachment investigation.

That’s 100% false. Any member of the three investigating committees could attend, and many Republicans did!

Whatever Cipollone’s supposed claim was of @RepAdamSchiff misrepresenting the July 25 transcript (when the “transcript” was already public), its nothing compared to Cipillone’s misrepresentations today about SCIF, etc

They are not just afraid of the truth, they distort the truth

Impeachment manager Schiff directly addressed the Cipollone statement in question. Schiff stopped short of calling Cipollone a liar, but he did say Cipollone was “mistaken.”

"He’s mistaken. Every Republican on the three investigative committees was allowed to participate in the depositions. More than that, they got the same time we did." pic.twitter.com/xvWRSZmOhY

“I’m not gonna suggest to you that Mr Cipollone would deliberately make a false statement…but I will tell you this: he’s mistaken. He’s mistaken,” Schiff said. “Every Republican on the three investigative committees was allowed to participate in the depositions. More than that, they got the same time we did.”

A smorgasbord of other criticisms of Cipollone soon followed.

What do you mean, no witnesses for the president?

Cipollone complains that President Trump was not allowed to call witnesses during House impeachment proceedings, while arguing in favor of rules that would also prevent the president from calling witnesses during his trial.

It's amazing to see a fact witness—who won't testify or release records in his possession—arguing on the Senate floor against allegations that are indisputably proven by (a) the slim stack of records that did come out and (b) the obstruction the witness facilitated. #Cipollone

It is hard to watch Pat Cipollone in the Senate without understanding that he is complicit in these impeachable events. He is a mob lawyer, nothing more.

During the House Intelligence Committee phase of the impeachment, the president, his lawyers and his Republican supporters complained that they were barred from participating in the proceedings and mounting a defense. The Judiciary Committee invited the White House to participate, but Trump et al. opted out of the proceedings entirely, seemingly as part of strategy to avoid legitimizing it by participating.

Cipollone has repeatedly relayed to key witnesses the president’s directives not to testify, as Democrats attempted to make the case that the president abused his power and obstructed Congress. Cipollone has attempted to turn the tables, saying that, actually, it is congressional Democrats who have abused their power. He even asked the House to either immediately end the “charade”now or, as Trump said, impeach the president “fast” so we could get the trial in the Senate (i.e. acquittal) over with.

Cipollone manufactures due process violations. He argues that Trump was entitled to cross-examine witnesses during investigation. That is not true in a criminal case. Right to cross-examine comes at trial. Cynical sleight of hand designed to confuse.

Meaning, he just accused his co-counsel and boss Pat Cipollone of lying to the Senate.