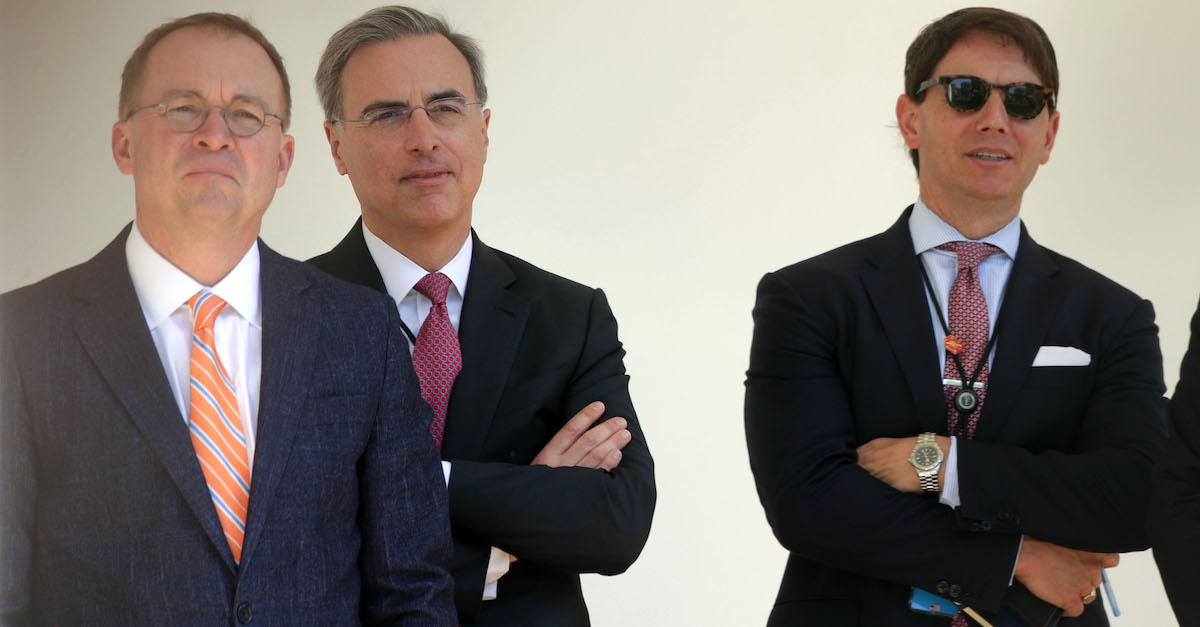 Acting White House Chief of Staff Mick Mulvaney, White House Counsel Pat Cipollone, and Principal Deputy Press Secretary Hogan Gidley listen during a Rose Garden event at the White House May 7, 2019 in Washington, DC. The first lady hosted the event to celebrate the anniversary of her Be Best initiative.

Rep. Adam Schiff (D-Calif.) and the other Impeachment Managers sent a letter to White House counsel Pat Cipollone on Tuesday, calling out a problem with President Donald Trump’s choice for counsel at the impeachment trial. Despite earlier reports that Trump was skeptical that Cipollone’s skillset was ideal for this task, Cipollone is, indeed, a leading member of the president’s defense team. The problem–at least according to the Impeachment Managers–is that Cipollone is also a key fact witness. Under traditional legal ethics rules, a lawyer’s being a witness at his own client’s trial is one of the biggest no-nos there is. The problem with the Impeachment Managers’ demand letter, however, is that it never acknowledges a critical reality: impeachment trials are not legal trials.

(a) A lawyer shall not act as advocate at a trial in which the lawyer is likely to be a necessary witness unless:

(1) the testimony relates to an uncontested issue;

(2) the testimony relates to the nature and value of legal services rendered in the case; or

(3) disqualification of the lawyer would work substantial hardship on the client.

(b) A lawyer may act as advocate in a trial in which another lawyer in the lawyer’s firm is likely to be called as a witness unless precluded from doing so by Rule 1.7 or Rule 1.9.

Having a lawyer who is personally embroiled in the facts of a trial is disastrous for a variety of reasons. It contaminates the proceedings by blurring the lines between advocacy and evidence – which, in turn, always has potential to create reversible error. It also creates an unfair advantage for the client. To function properly, the American adversarial legal system relies on attorneys having obligations both to their clients and to the court itself; while advocacy is meant to be zealous, it is also meant to be disinterested. Once a lawyer has personal knowledge of material facts, everything the lawyer says at trial becomes unsworn testimony.

The letter sent by Schiff and others follows precisely the logic of the ABA rules. According to several reports, Cipollone was directly aware of and involved in the fallout that followed the Trump-Volodymyr Zelensky call. John Eisenberg, the National Security Council lawyer, reportedly forwarded concerns about the call to Cipollone. Cipollone and Eisenberg then discussed the matter before the Justice Department ultimately decided not to pursue it. Oh, and as White House counsel, Cipollone is Eisenberg’s boss. Therefore, Democrats maintain, because Cipollone has first-hand knowledge of facts material to the Articles of Impeachment, he may be ethically disqualified from representing Trump.

“Even if the advocate does not take the witness stand, his status as unsworn witness risks seriously damaging the fairness at trial.”

On the obstruction of Congress charges, the Impeachment managers pulled zero punches with Cipollone:

“Your office was also directly involved in potential efforts to conceal President Trump’s scheme from Congress and the public.

Furthermore, there is evidence that you were directly involved in briefing President Trump about the whistleblower complaint submitted the Inspector General for the Intelligence Community and in the decision to withhold that complaint from Congress in violation of the law.”

The letter ends by throwing down something of a legal-ethical gauntlet. If Cipollone plans to serve as Trump’s advocate, he must first disclose all facts and first-hand information he has, such that the Senate and the Chief Justice can,  “be apprised of any potential ethical issues, conflicts, or biases.” That way, if Trump or Cipollone argues that Cipollone falls into an exception of the ethical rule, they’ll need to come clean on facts.

But at an impeachment trial, there is no judge or jury, as the Senate takes on both roles. There are no specific rules of evidence or procedure, and no appellate authority. Most significantly, the lack of evidentiary rules for impeachments means that the Senate is not limited to relying solely on information adduced during trial. The Senate is free to rely on outside information, regardless of the format, function–or even reliability–of that information.

Impeachment trials were always intended to be political; as such, perhaps it isn’t improper to have the accused’s representative be someone personally involved in the relevant facts.

Still, though, there are some basics principles of procedural fairness that everyone from the Founding Fathers to even the most partisan Americans would likely expect to function during impeachment trials. Any testimony given, for example, would still be provided under a meaningful oath. Parties would still be expected to adhere to any stipulations to which they agreed. Some rules will still be followed.

The propriety (or lack thereof) of an advocate’s also being a fact witness may well lie in a gray area between legal trials and impeachment proceedings. It is possible that advocates would be expected to adhere to the same general principles of legal ethics applicable during the practice of law. But then again, Republicans could boldly argue that impeachment is so inherently political that traditional guarantees of fairness and rules of law do not apply. After all, the practice of law and the practice of politics are unquestionably different.

Trump and Republicans could use the Cipollone issue to scorch the earth on impeachment proceedings. Adopting such a position officially–that impeachment trials are properly understood as unstructured political free-for-alls–may turn out to be Trump’s battle cry. Such a position might resonate with Trump’s base, which has already been primed to understand the impeachment process as a sham. However, there is at least some danger for Trump–and indeed, for Republicans of the future in adopting such logic. If anything goes at Trump’s impeachment trial, then so too will be the case for any elected official facing a hostile majority in Congress. Donald Trump may well choose to tie the fate of impeachment to his own personal fate–but is Cipollone’s place on his defense team really worth it?