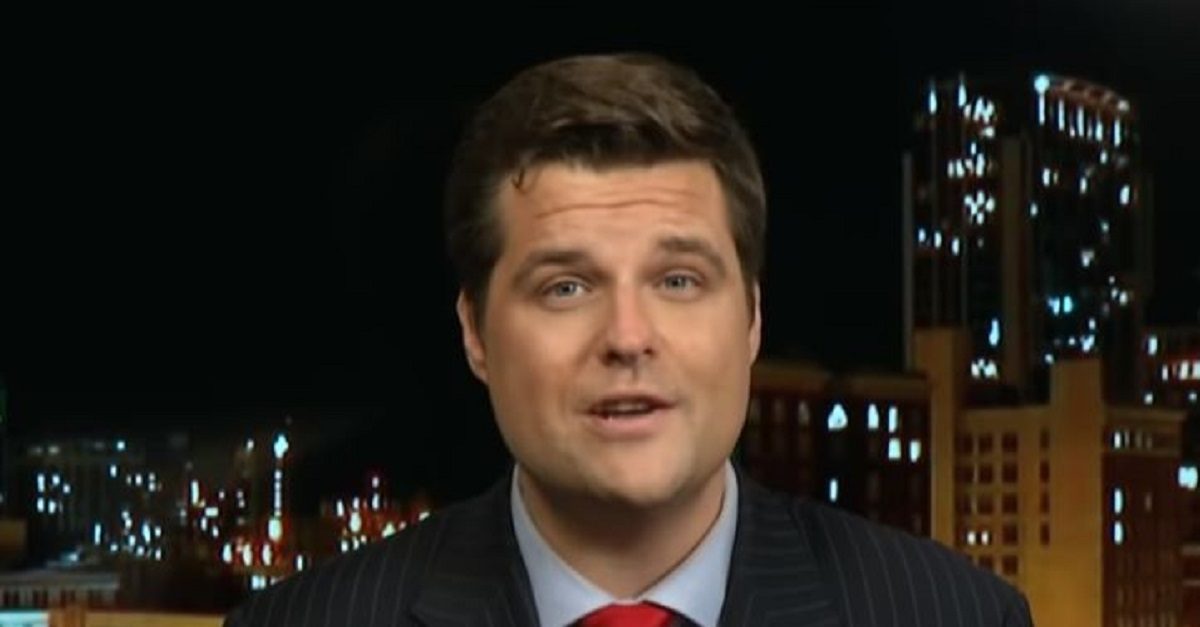 In a jarring protest of Democrats’ impeachment inquiry into President Donald Trump, House Republicans on Wednesday delayed the process by storming a secure facility during a witness deposition and refusing to leave. The reckless, pizza-fueled, rule-breaking, and potentially law-breaking maneuver was reportedly supported by President Trump.

According to Bloomberg News, Trump was made aware in advance of the planned intrusion and “supported” it:

Trump had advance knowledge and supported a protest by Republicans who told him they planned to barge into a secure hearing room on Capitol Hill where Democrats are holding impeachment testimonies, according to four people familiar with the matter.

Trump on Tuesday met with about 30 House Republicans at the White House to talk about the situation in Syria and the impeachment inquiry. During a nearly two-hour meeting, which focused mostly on the impeachment inquiry, lawmakers shared their plans to storm into the secure room, the people said. Trump supported the action, saying he wanted the transcripts released because they will exonerate him, the people said.

CNN also reported that the president had advance knowledge of what was going to happen.

The faction of approximately two dozen House GOP members, reportedly led by Rep. Matt Gaetz (R-Fla.), barged into the Sensitive Compartmented Information Facility, also known as a SCIF, interrupting the deposition of Deputy Assistant Secretary of Defense Laura Cooper, yelling and shouting down the procedure as a “sham process.”

WATCH: here's the video of when 2 dozen GOP members, led by @mattgaetz entered the secure hearing room (SCIF) to interrupt witness testimony in the #ImpeachmentInquiry as they demand access, despite not being committee members. They're complaining it's a "Soviet-style process". pic.twitter.com/8KddYz3r9D

Gaetz was booted nine days ago when attempting to crash Fiona Hill’s deposition.

At least some of the congressional protestors brought their personal cell phones into the SCIF, a major violation of House procedural rules which baffled experienced national security professionals, many of whom noted that the stunt could potentially compromise U.S. national security.

She explained that members of Congress, many of whom do not generally utilize sophisticated security measures, are extremely high-value targets for foreign intel services. “This means they may not know they have been compromised. For example, their phones can be turned into listening devices without their knowledge,” she wrote. “But in ‘storming the SCIF’ without observing the security protocols, Rep. Gaetz et al., endangered our national security [and] demonstrated they care more about a political stunt than protecting intelligence information. I cannot emphasize enough how serious this is.”

Attorney Bradley P. Moss, who specializes in national security, federal employment and security clearance law, was appalled that lawmakers would disregard essential safeguards for nothing more than political theater.

“I am without words to respond to such a patently political breach of security protocols just to score a cable hit tonight on Hannity,” Moss told Law&Crime. “Rules matter and these lawmakers just showed how little they actually care about them.”

“I’ve been in SCIFs a lot. The stupidest thing someone can do is bring an electronic device. You would lose your security clearance [and] may even face criminal prosecution. If these reports are accurate, those remedies should be looked at,” Katyal commented.