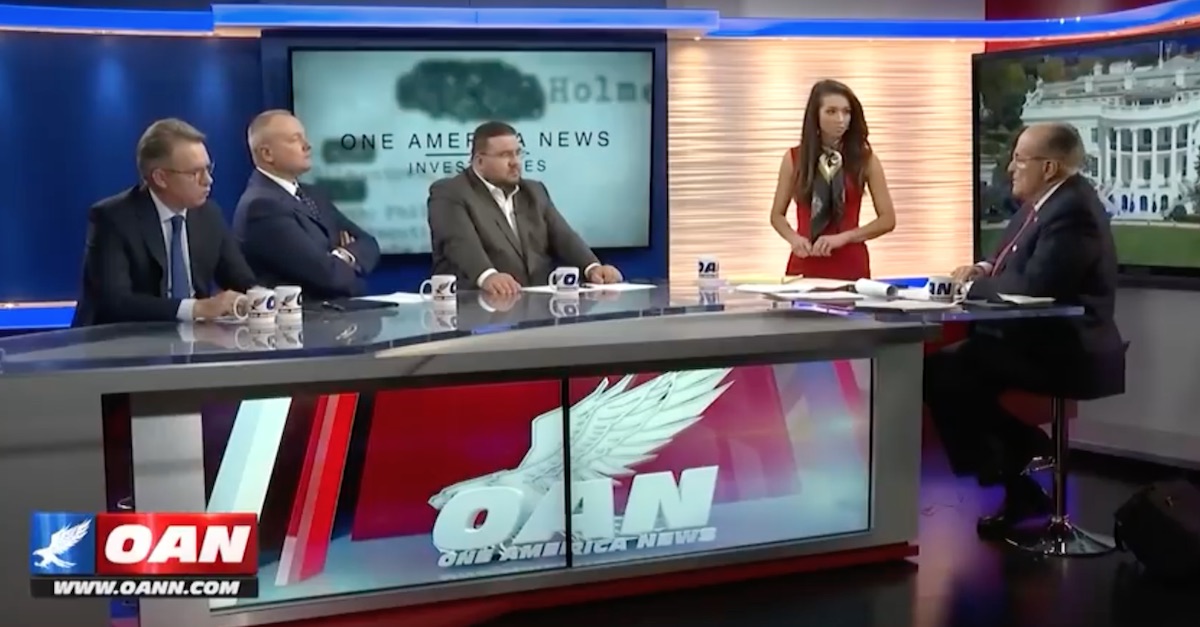 Sen. Susan Collins (R-Maine) wants everyone to believe the unbelievable: that some kind of lesson has been learned. The New York Times reported on Wednesday that Rudy Giuliani played videos of his controversial interviews with former Ukrainian officials for President Donald Trump as the impeachment inquiry into Trump’s conduct was ongoing.

In December, Mr. Giuliani told an associate that he briefed Mr. Trump before traveling to Budapest and Kyiv to film interviews with former Ukrainian officials. As soon as Mr. Giuliani returned from the trip, Mr. Trump reportedly asked him what he had collected. “More than you can imagine,” he replied.

Mr. Giuliani has told his associates that he played the videos of his interviews for an appreciative Mr. Trump.

The exact date of that reported video session with the president was not made clear, but Giuliani was spotted at the White House on December 13, 2019 after returning from Ukraine. That was the day the House Judiciary Committee voted to approve the articles of impeachment: abuse of power and obstruction of Congress.

Spotted by our @maeganvaz: Rudy Giuliani arriving at the WH minutes before the House Judiciary is set to vote on articles of impeachment. pic.twitter.com/v1AKvDtdsb

CONTEXT: This occurred WEEKS AFTER @NancyPelosi announced the impeachment inquiry.

That means TRUMP was still encouraging @RudyGiuliani's Ukraine dirt-digging campaign, even as the House was nearing its vote to impeach @POTUS for his role in the Ukraine pressure campaign. https://t.co/IvvjAZOmEp

The Republican-led Senate is expected to acquit President Trump of these charges today.

The Giuliani interviews, as Law&Crime noted before, were specifically done to justify Trump’s demands for investigations of Joe Biden and Hunter Biden, and were meant to “destroy” the impeachment inquiry. Indeed, according to One America News Network (OAN), the Giuliani special included officials testifying “under oath” (though without any penalty for lying) to debunk the “impeachment hoax” and expose “Biden family corruption in Ukraine.”

One of the Giuliani’s interviews reportedly scandalized Ukrainians. Andrii Artemenko was expelled from Ukraine’s Radical Party and accused of treason by Ukrainian prosecutors in 2017 for meeting with President Trump’s then-personal attorney Michael Cohen, and Russian-American businessman and former Trump associate Felix Sater on January 27 in New York — where a strategy was discussed that would permit Russia to lease Crimea for between 50-100 years.

Ukrainian prosecutors accused Artemenko of conspiring with Russia to commit “subversive acts against Ukraine,” by designing a strategy that would “legitimize the temporary occupation” of the Crimean peninsula, which Russia forcibly and illegally annexed in 2014. Artemenko reportedly told the Daily Beast that he played “the key role” in helping Trump’s investigations.

OAN said in advance that Artemenko would be featured on the first episode of Giuliani’s special, along with the former Ukrainian diplomat at the center of “fictional” allegations that Ukraine meddled in the 2016 U.S. presidential election (i.e., the CrowdStrike conspiracy theory).

Just yesterday, Giuliani said he is “still investigating” and receiving information. He also claimed President Trump “hasn’t told me not to do it,” adding, “I haven’t talked to him about this case in quite a while.”

“Biden should be investigated. Absolutely, 100%,” Giuliani said, encouraging all of this to continue post-impeachment acquittal. “[Trump]’s the chief law enforcement officer of the United States. He certainly shouldn’t back away from it.”

The president was impeached for an alleged shakedown of Ukraine in order to get that foreign nation to announce investigations of the Bidens ahead of the 2020 election. The second article of impeachment accused Trump of obstructing Congress’s investigation of those efforts and of the reasons behind the White House’s hold on congressionally appropriated military aid to Ukraine. Retiring Republican Sen. Lamar Alexander (R-Tenn.), when announcing his vote against calling new witnesses, even said that House Managers proved Trump withheld the aid, “at least in part,” to pressure Ukraine into investigating or announcing investigations of the Bidens.

“Lamar is wrong, and Lamar is a good friend of mine, and he’s a fine man except he doesn’t know all the facts,” Giuliani told NPR. “[He] only knows half the facts; a lot of them distorted.”