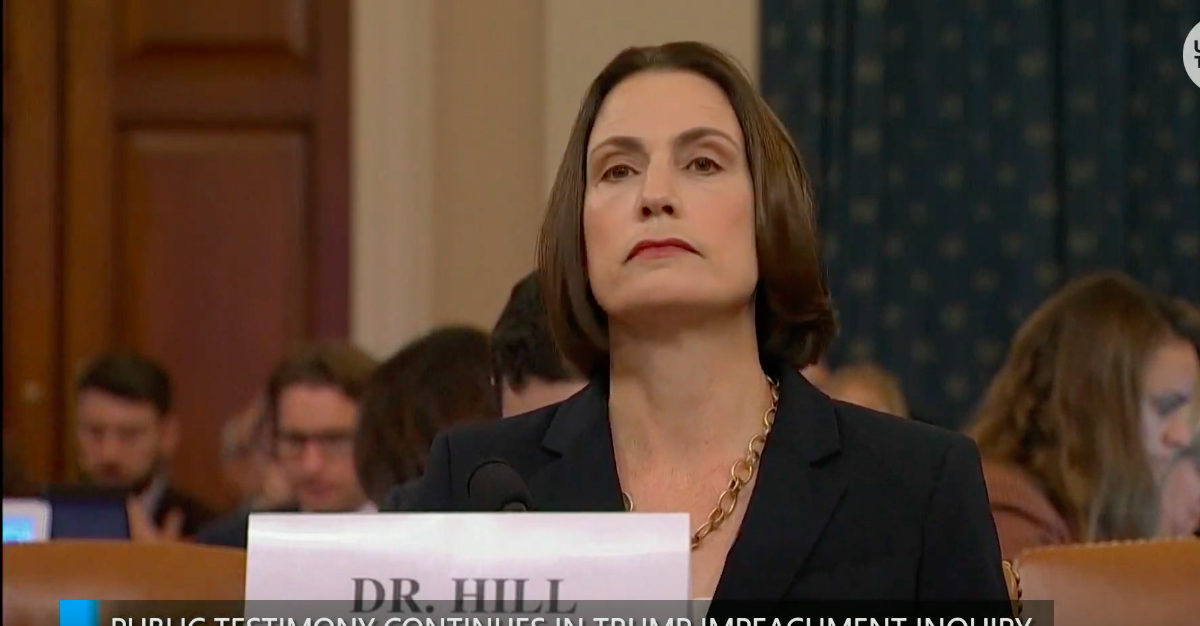 Hill, a career intelligence officer that has worked in every administration since George W. Bush, was hired by former National Security Advisor Gen. Michael Flynn to be the senior director for Europe and Russia on the NSC.

Prior to becoming a part of the impeachment hearings, Hill had clearly been an attentive observer, as she took direct aim at the GOP members of the panel who have pushed Russian President Vladimir Putin’s favored narrative.

“Based on questions and statements I have heard, some of you on this committee appear to believe that Russia and its security services did not conduct a campaign against our country—and that perhaps, somehow, for some reason, Ukraine did,” Hill said. “This is a fictional narrative that has been perpetrated and propagated by the Russian security services themselves.”

In an excerpt seemingly tailored specifically for Ranking Member Rep. Devin Nunes (R-Calif.), Hill concisely explained it was “beyond dispute” that Russia, not Ukraine, was the foreign power that “systematically attacked” America’s democratic institutions in the lead up to the presidential election, noting this was also the conclusion of U.S. intelligence agencies and a congressional report.

Hill also warned members of Congress of the threat they pose to national security in promulgating baseless conspiracy theories.

“I refuse to be part of an effort to legitimize an alternate narrative that the Ukrainian government is a U.S. adversary, and that Ukraine—not Russia—attacked us in 2016,” Hill said. “These fictions are harmful even if they are deployed for purely domestic political purposes. President Putin and the Russian security services operate like a Super PAC. They deploy millions of dollars to weaponize our own political opposition research and false narratives. When we are consumed by partisan rancor, we cannot combat these external forces as they seek to divide us against each another, degrade our institutions, and destroy the faith of the American people in our democracy.”