‘Badge of Honor’: Don Jr. Explodes After Trump’s ‘2-0’ Impeachment Victory; Accuses Detractors of Not Having ‘Guts’ or ‘Balls’ To Do the Right Thing 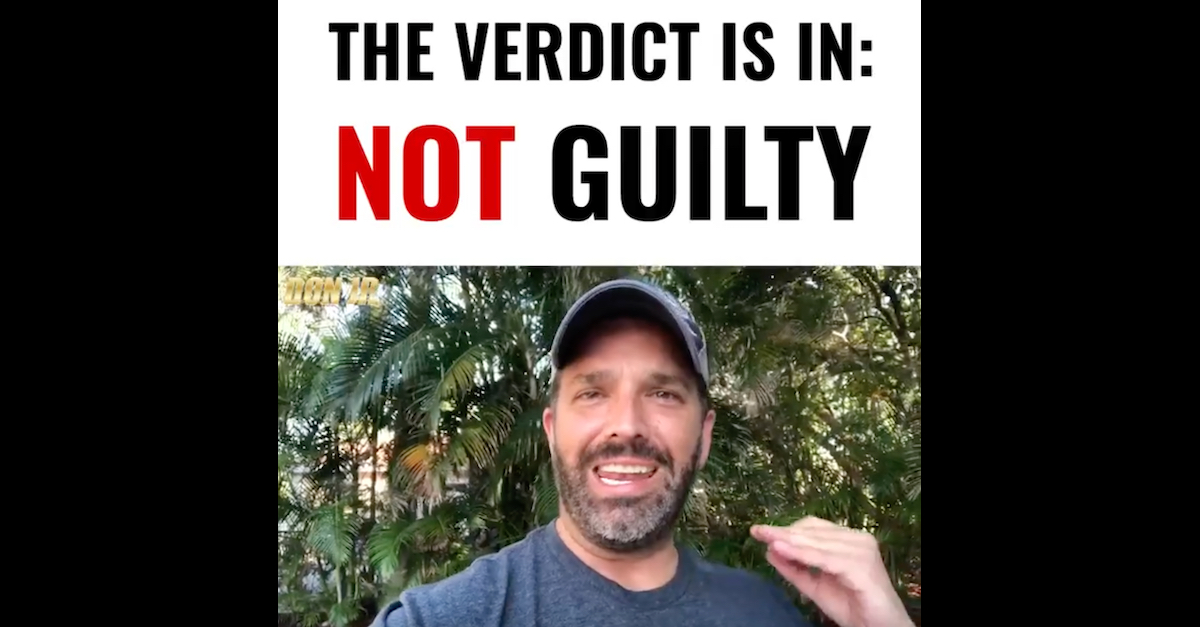 As Senators continued to speak their minds after Saturday’s late afternoon 57-43 vote to acquit former President Donald Trump of inciting an insurrection, the former president’s son, Eric Trump, took to Twitter to brag.

Donald Trump is the only United States president to have ever been impeached twice.  He was convicted neither time.

“NOT GUILTY,” he said at first. “Now maybe it would be nice if the senators stopped putting on show trials for free air time and actually started working for the American people for a change.”

NOT GUILTY. Now maybe it would be nice if the senators stopped putting on show trials for free air time and actually started working for the American people for a change.

“Beating these establishment clowns twice after years of BS and under unprecedented circumstances is a badge of honor,” he said next.

Beating these establishment clowns twice after years of BS and under unprecedented circumstances is a badge of honor.

Trump Jr. didn’t relent.  He characterized his father as a “two-time impeachment champ” in a meme which contained boxing iconography:

When the establishment hates you and wants to prevent you from ever running again you know you’re doing something right. pic.twitter.com/jtMqUAGEYv

Trump Jr. then aired grievances against Sen. Mitch McConnell (R-Ky.).  Following the impeachment vote, McConnell berated the ex-president’s conduct leading up to the Jan. 6th siege; however, McConnell did not vote to convict due to his belief that the Senate lacked jurisdiction over the now-private-citizen Trump Sr.  (Technically speaking, a jurisdiction vote occurred long before the vote to convict, but McConnell glossed the bifurcated nature of the vote.)

Trump Jr. said McConnell should have shown similar backbone when his father was accused of colluding with Russia during the 2016 election.

“If only McConnell was so righteous as the Democrats trampled Trump and the Republicans while pushing Russia collusion bullshit for 3 years or while Dems incited 10 months of violence, arson, and rioting,” Don Jr. said.  “Yea then he just sat back and did jack shit.”

If only McConnell was so righteous as the Democrats trampled Trump and the Republicans while pushing Russia collusion bullshit for 3 years or while Dems incited 10 months of violence, arson, and rioting. Yea then he just sat back and did jack shit.

Trump Jr. then retweeted a projection by alt-right commentator Mike Cernovich that McConnell’s statement would cost the GOP seats in the 2022 midterm election.

Mitch’s speech is ensuring GOP doesn’t take a majority in Senate in 2022. Entire thing is self-destructive.

Trump Jr. eventually posted a video response to the Senate’s acquittal of his father. In it, he directly called out Sens. Mitt Romney (R-Utah) and Richard Burr (R-N.C.) as among the “clowns” of the day and further railed against other perceived enemies whom he believed didn’t have the “guts” or “balls” to do the right thing throughout the impeachment process (or otherwise). He said the proceeding was a waste of time that made him feel like the government was “working for China” rather than helping the “American worker suffering through” the pandemic.

Burr and Romney voted to convict Trump.  They were among seven Republicans who crossed party lines to do so.

“Guys: go back to doing your damn jobs for a change!” he exclaimed. “We’d all like to see that. Although, with the level of incompetence that I’ve seen out of you guys, and you saw — you saw the trial, you saw what happened, you saw the lies, you saw the decent, and you finally saw them get called out — I’m not sure we actually we want them working for us because with that level of incompetence, you may want them just to be preoccupied doing something else rather than trying to fix things; ’cause I imagine they can only manage to make it worse.”

My thoughts on the Not Guilty verdict in Sham Impeachment Part Deux. https://t.co/z2wBTLc8Jj

Don Jr. was chastising Senate Democrats and, presumably, those Republicans who voted to convict while tipping his hat to his father’s impeachment attorneys. The impeachment defense team routinely turned the looking glass back at comments various Democrats and their allies made during the summer of 2020 in support of protests surrounding the death of George Floyd at the hands of Minneapolis police officers. The defense team accused Democrats of inciting violence in a summer which was heralded by massive, multi-city George Floyd and Black Lives Matter protests which were at times — and were at other times not — violent.

After the Jan. 6th siege on the U.S. Capitol which led to the impeachment, Ivanka Trump called those involved “American patriots.”

Giuliani had been highly critical of the impeachment proceedings but had not commented on the acquittal as of the time of this writing.

The impeachment proceedings today prove that the current Democrat party is so rooted in hatred it is willing to distort video, forge documents, lie, and act like world-class hypocrites.

The question now is how many of THEM should be removed?

Several days ago, as the Senate proceedings were ongoing, Eric Trump hawked red caps similar to the “Make America Great Again” hats which hallmarked his father’s one-term presidency.  In true Trump fashion, he suggested the new caps — which contained merely the verbiage “TRUMP” and an American flag — would be fine purchases for the commemoration of President’s Day.  The going price per hat is $36.00.

Show your support on Presidents Day for the best President this country has ever had! https://t.co/CFUzs9Eb6V #TheRealTrumpHat #MAGA pic.twitter.com/ukSSNAN1I9