When Wednesday’s attempted coup at the U.S. Capitol broke out, the Trump family was at first noticeably quiet. About an hour in, though, Presidential daughter Ivanka Trump implicitly praised the insurrectionists, then apparently thought better of it.

While protesters scaled the Capitol walls, broke windows, and stormed legislative chambers, Ivanka tweeted to the group, addressing them as “American Patriots.”

“AMERICAN PATRIOTS,” the First Daughter wrote in caps-lock, “any security breach or disrespect to or law enforcement is unacceptable.”  “The violence must stop immediately.” She ended, “Please be peaceful.” 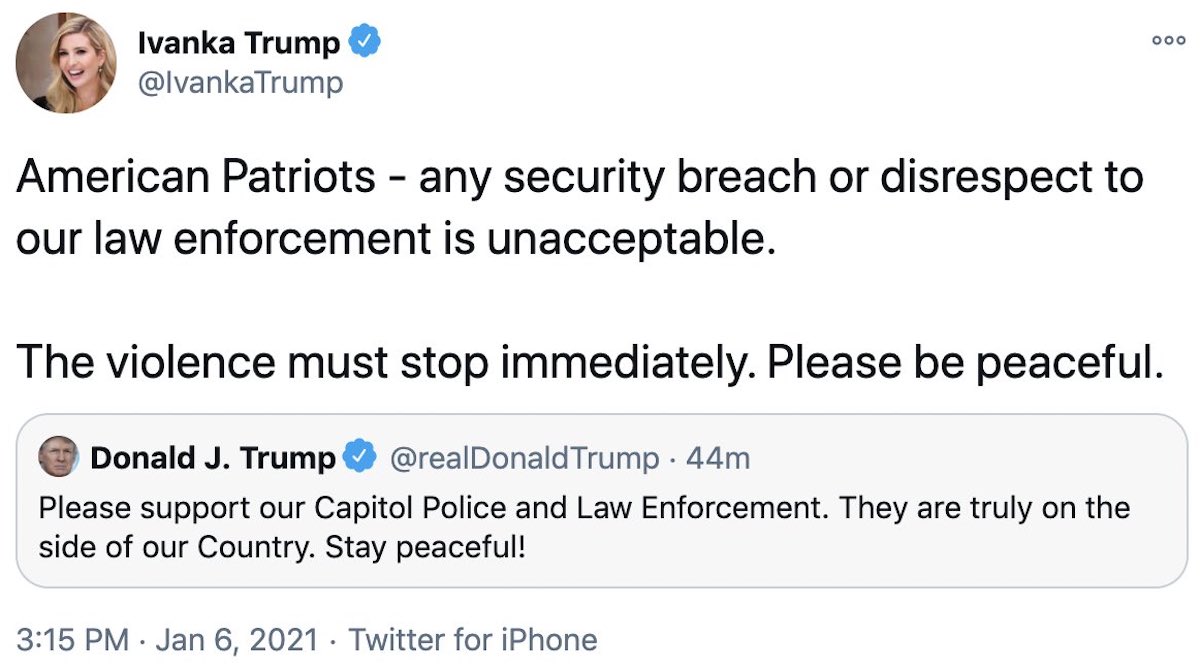 At this point, Trump has NOT told his supporters to the leave the Capitol grounds.

And Ivanka referred to them as “American Patriots.”

(It’s always important to listen to what they don’t say as much as what they actually do say. Their followers know that too.) pic.twitter.com/aWc57QEqyw

To be clear. @IvankaTrump is a terrorist sympathizer. She called them American Patriots. pic.twitter.com/jlnnaanmeH

FDOTUS responded by deleting the tweet, and posting a new one, which ostensibly clarified her meaning.

No. Peaceful protest is patriotic. Violence is unacceptable and must be condemned in the strongest terms. https://t.co/GwngZTqzTH

While Ms. Trump did manage to call violence “unacceptable,” she continued to hail the patriotism of peaceful protest. It remains unclear whether she believes those scaling the walls of the Capitol building are the peaceful patriots she praises or the violent ones she called to condemned.

The utter impotence of Ms. Trump’s revised messaging wasn’t lost on anyone.

That kind of bold action should surely bring this armed sedition to an end. 🙄 pic.twitter.com/IiUYxycQHN

I see the inability to rise to the occasion apple has not fallen far from the fucking tree, @IvankaTrump. pic.twitter.com/cI8PRWtcOC