What Ivanka Trump's Emails May Reveal About Deposition | Law & Crime 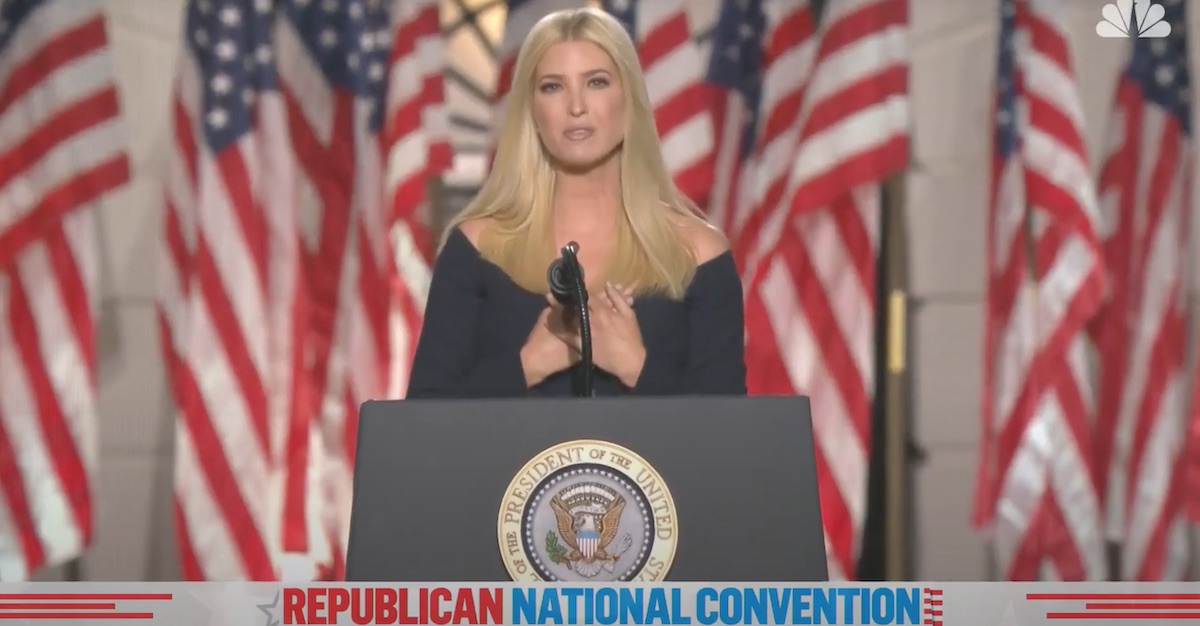 The court filing revealing that Ivanka Trump sat for a deposition with the office of D.C. Attorney General Karl Racine revealed few details about the First Daughter’s interrogation. But her emails open a window into a likely focus of the Q&A.

Racine has accused President Donald Trump’s inaugural committee of coordinating with the Trump family to grossly overpay for an event space inside Washington’s Trump International Hotel—to the tune of at least $300,000 for a private reception from the outgoing president’s children Donald Trump Jr., Ivanka Trump and Eric Trump.

The attorney general’s office obtained emails from 2016 showing haggling over that deal, and the First Daughter pulled one out of context to defend the transaction.

“Why don’t you call and negotiate,” Ms. Trump wrote the hotel’s managing director Mickael Damelincourt and Trump Hotels CEO Eric Danziger on Dec. 14, 2016. “It should be fair market rate.”

Using the message to attack the “Democrat D.C. AG’s” probe as an expression of “politically motivated vindictiveness,” Ms. Trump did not post the message that she received some three days later from Melania Trump’s ex-senior adviser Stephanie Winston Wolkoff, who warned that the cost would come back to haunt them. 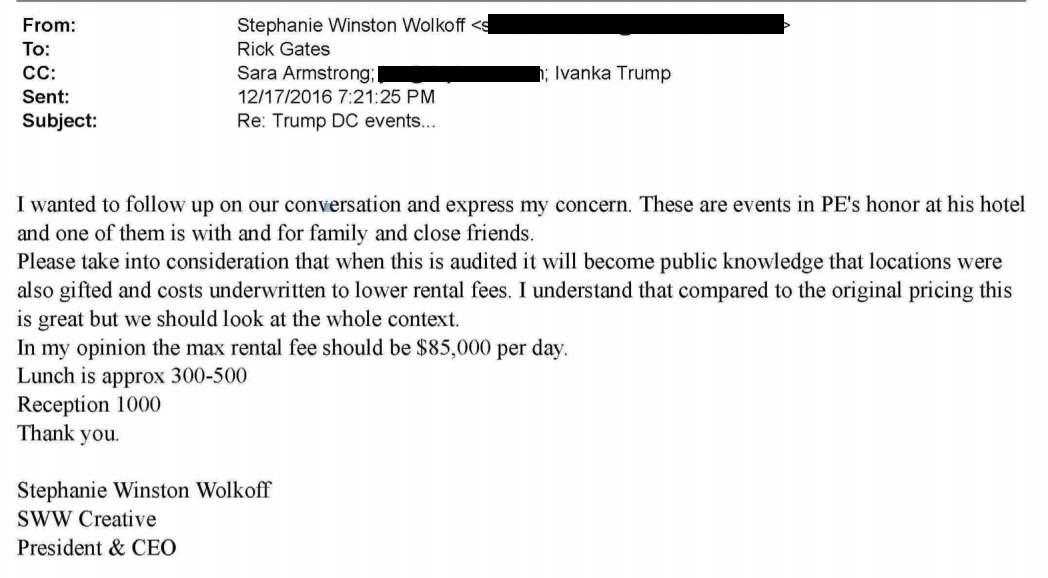 “Please take into consideration that when this is audited it will become public knowledge that locations were also gifted and costs underwritten to lower rental fees,” Wolkoff told Ms. Trump, her father’s disgraced ex-campaign aide Rick Gates, and two other people on Dec. 17, 2016. “I understand that compared to the original pricing this is great but we should look at the whole context. In my opinion the max rental fee should be $85,000 per day.”

That email was sent hours after Rick Gates said the following on the same day:

Stephanie-
Here is the revised pricing for the Trump Hotel following my conversation with Mickael. Much better rate.

Ivanka – thank you for your help.

“The [Presidential Inaugural Committee] and the Trump Hotel ignored these warnings and went ahead with the improper payments at issue in this case,” Rock wrote in a 6-page motion, which discloses that Wolkoff produced more than 18,950 pages of documents to the attorney general’s office.

Ivanka Trump’s deposition on Tuesday was first disclosed in the motion to question Wolkoff.

The Trump Organization’s attorney James Billings-Kang of the firm Seyfarth did not immediately respond to an email requesting comment.

Racine’s complaint alleges that the inaugural committee created in 2016 misused nonprofit money to make unfair payments of $1.03 million to the Trump and failed to seek out fair market alternatives.

A month after Election Day in 2020, outgoing President Trump continues to flail in last-gasp efforts to overturn the race for the White House that he lost decisively, and attention has been turning to the potential civil and criminal liability that could await his family once he leaves or is ousted from office.

After a judge rejected his effort to delay his grilling, Eric Trump sat for a deposition in New York Attorney General Letitia James’ investigation into whether the family business improperly inflated the president’s assets on annual financial statements to secure loans and obtain economic and tax benefits.

Sputtering misinformation and rage in a meandering, 45-minute tirade, the lame-duck president lashed out at local prosecutors in New York and Washington.

“The New York attorney general, who recently ran for office, campaigned without knowing me stating we will join with law enforcement and other attorneys general across this nation,” Trump declared on Wednesday evening, referring to James.

“In removing this president from office, I never met her,” he continued. “It’s important that everybody understand. She said that the days of Donald Trump are coming to an end, and all it’s been is a big investigation in Washington and New York and anyplace else that can investigate because that’s what they want to do.”

James quickly responded that her investigation grew out of Michael Cohen’s testimony about the Trump Organization’s dealings.

“Unlike the president and the unfounded accusations that he hurled today, we are guided by the facts and the law, and politics stop at the door,” she wrote in a statement. “Period.”

The attorneys general from New York and Washington have been investigating civil actions.

Leaving office could also subject Trump to obstruction-of-justice charges that ex-special counsel Robert Mueller found could not be brought against a sitting president, as well as possible campaign-finance violations queued up when Southern District of New York prosecutors shielded Trump’s name as “Individual-1.”

Legal experts dispute whether Trump could pardon away federal criminal liability from himself, but it is undisputed that state action is beyond the reach of the White House pardon power.