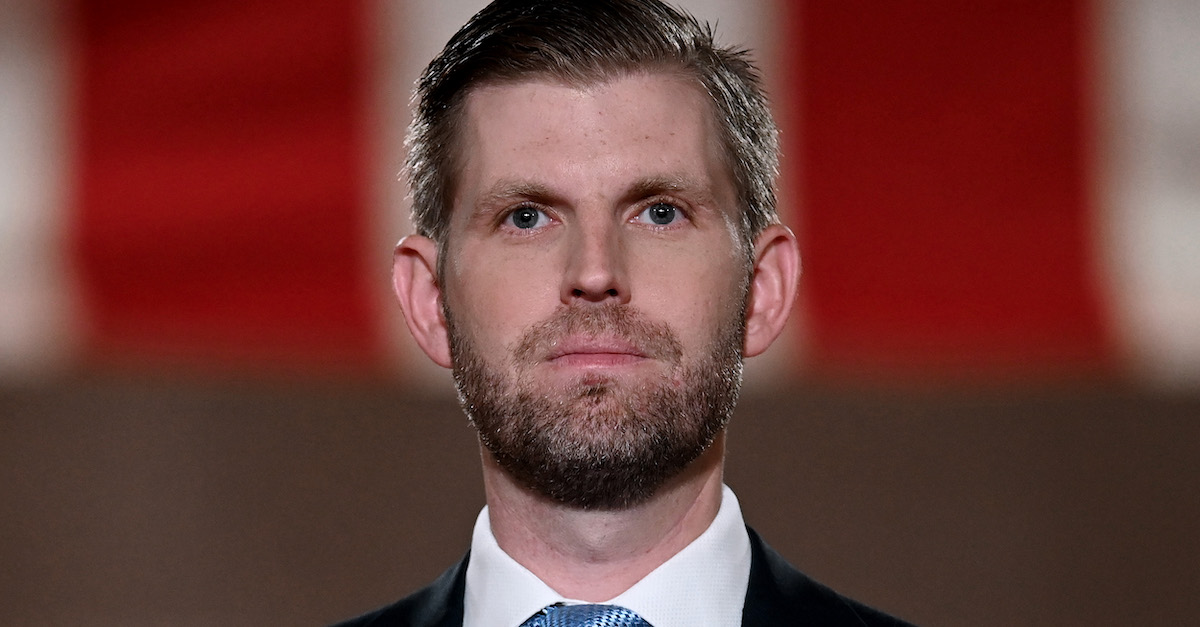 The ruling came almost a week to the day that it was reported that Eric Trump would comply with a subpoena—but only after the election. It also comes a day after Trump family nemesis New York Attorney General Letitia James (D) cited a Fox News Radio interview, in which Eric Trump uttered the words “why would you possibly comply.”

#BREAKING: A judge just ruled that Eric Trump can no longer delay an interview under oath with my office as part of our ongoing investigation into financial dealings of the Trump Organization.

Eric Trump must interview with my office by October 7th, 2020.

“A judge just ruled that Eric Trump can no longer delay an interview under oath with my office as part of our ongoing investigation into financial dealings of the Trump Organization,” James noted. “Eric Trump must interview with my office by October 7th, 2020.”

Justice and the rule of law prevailed today. We will immediately move to ensure that Donald Trump and the Trump Organization comply with the court’s order and submit financial records related to our investigation. Further, Eric Trump will no longer be able to delay his interview and will be sitting down with investigators in my office no later than October 7. To be clear, no entity or individual is allowed to dictate how or when our investigation will proceed or set the parameters of a lawful investigation. The court’s order today makes clear that no one is above the law, not even an organization or an individual with the name Trump.

Last week, the Trump Organization opposed a motion to compel Trump’s testimony by saying he has “made clear that he is willing to appear pursuant to the subpoena, and have also proposed four available dates after the Presidential election on November 3, 2020.”

“In this regard, we note that the OAG investigation has been ongoing for approximately 18 months, and that additional [depositions] are scheduled into October 2020 for certain other individuals,” the memorandum of law went on, citing Eric Trump’s busy schedule. “In good faith, counsel for Mr. Trump proposed multiple dates beginning shortly after the election – just two weeks later on November 19 – because of Mr. Trump’s extreme travel schedule and related unavailability between now and the election, and to avoid the use of his deposition attendance for political purposes.”

Trump’s lawyer Alan Futerfas reiterated that position on Wednesday, but to no avail.

“As the world knows, there’s an election going on in about four weeks in this country, maybe five weeks. Eric Trump is a vital and integral part of that, and he’s traveling just about seven days a week,” Futerfas said.

“To your knowledge, did the president ever provide inflated assets to an insurance company?” Rep. Alexandria Ocasio-Cortez (D-N.Y.) asked Cohen during a hearing. Cohen replied in the affirmative and said that evidence of the rate gamesmanship would be found at the “Trump Org.”

This investigation is similar to but distinct from the criminal probe currently being run by Manhattan DA Cy Vance. Vance’s office argued in federal appellate court on Monday that it needs the president’s tax returns in order to determine whether criminal tax fraud laws were violated. Vance’s investigation is based partly on Cohen’s admitted role in hush money payments before the 2016 election and partly on bombshell news reports about tax-dodging schemes. Vance contends that those reports show there is a legitimate basis for further investigation.

In August of this year, James filed a series of public and sealed court documents against the Trump Organization and Eric Trump over the Cohen fraud allegations. James asked that a state court force the defendants to comply with extant subpoenas demanding the release of sensitive financial information that may have been used to commit fraud. James also sought to compel Eric Trump’s testimony.