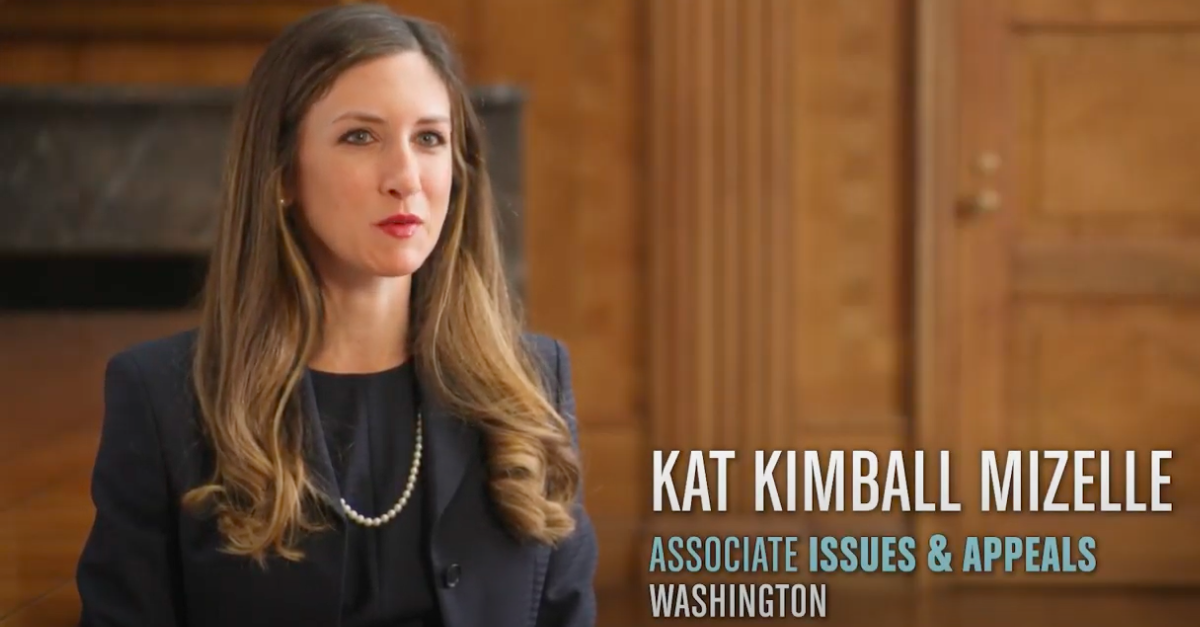 The American Bar Association (ABA) on Wednesday deemed President Donald Trump‘s latest nominee for a lifetime position on the federal bench is not qualified for the position.

In a letter to the Senate Judiciary Committee Chairman Sen. Lindsey Graham (R-S.C.) and Ranking Member Sen. Dianne Feinstein (D-Calif.), the ABA declared that a “substantial majority” of its Standing Committee determined that Kathryn Kimball Mizelle, 33, was “Not Qualified” to serve on the U.S. District Court for the Middle District of Florida.

Mizelle, who currently works at Jones Day law firm, previously completed four judicial clerkships (including for Supreme Court Justice Clarence Thomas) and served in a number of roles with the U.S. Department of Justice, including in the Eastern District of Virginia from 2014 to 2015.

The ABA rating system for judicial nominees focuses “strictly” on a candidate’s professional qualifications for the role such as “professional competence, integrity and judicial temperament,” returning one of three possible outcomes: Well Qualified, Qualified, or Not Qualified. Mizelle is the tenth Trump nominee to be deemed “Not Qualified” by the organization.

Chair of the ABA’s Standing Committee on the Federal Judiciary Randall D. Noel wrote that Mizelle, who graduated law school in 2012, represented a “rather marked departure” from the committee’s standard Backgrounder criteria, which provides that “a nominee to the federal bench ordinarily should have at least 12 years’ experience in the practice of law.”

The committee did concede that lacking such experience could be offset by “the breadth and depth” of a nominee’s legal experience, such as “substantial trial or courtroom experience and/or compensating accomplishments in the field of law.” However, that was not the case for Mizelle, whom the committee noted had never tried a single criminal or civil case as either lead or co-counsel.

“In view of the importance of substantial courtroom and trial experience as it relates to professional competence to serve as a lifetime Article III judge, the Standing Committee accordingly has concluded – after a thorough peer review evaluation and careful deliberation – that the nominee presently does not meet the requisite minimum standard of experience necessary to perform the responsibilities required by the high office of a federal trial judge,” the letter stated.

The committee said that its decision was in no way meant to impugn Mizelle’s intellect, work ethic, or resume, but said these were not enough to counterbalance her lack of experience.

“She presents as a delightful person and she has many friends who support her nomination. Her integrity and demeanor are not in question,” the letter stated. “These attributes however simply do not compensate for the short time she has actually practiced law and her lack of meaningful trial experience.”

Other Trump nominees to be rated “Not Qualified” by the ABA include Justin Walker (though that changed later), Sarah Pitlyk, and, controversially, Lawrence VanDyke.

Assistant Attorney General Beth A. Williams, for one, has argued that Trump judicial appointments “are among the most qualified in history.” She said that even a biased ABA (“Peer-reviewed studies have shown the ABA evaluates nominees of Republican presidents more harshly than those of Democratic presidents…”) believes this.

Mizelle’s husband is Chad Mizelle, who currently works in the Trump administration. Eyebrows were raised in February when he was installed in a senior legal role. Critics said that the General Counsel for the Department of Homeland Security position should be filled by someone with much more experience.

Read the full letter from the ABA below: